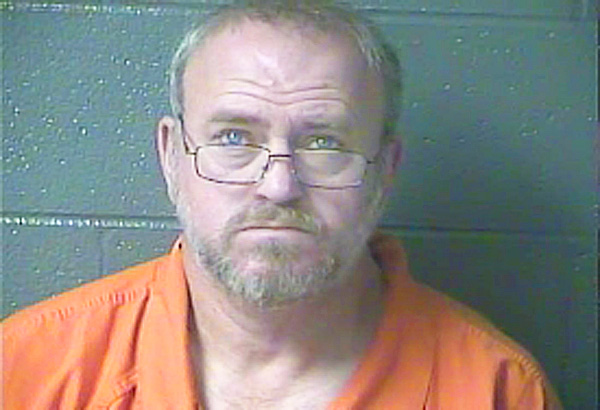 A former fire chief for Danville, James “Woody” Ball, has been arrested in Boyle County on an outstanding North Dakota warrant, accusing him of possession of child pornography, a class C felony.

Ball, 53, of Yates Road in Junction City, was arrested Saturday morning by a Boyle County deputy sheriff on a warrant that was filed in July 2016 in Williston, North Dakota, where Ball had worked as chief fire inspector from Sept. 8, 2014, to May 22, 2015, after retiring from the Danville Fire Department in August of 2014.

The warrant stemmed from an investigation in April 2015, when law enforcement officers conducted a search at Ball’s apartment, where he lived with Dara Grider and two minor children, in Williston, according to an affidavit of the District Court Northwest Judicial District in North Dakota.

The search was conducted by Williston Police and members of the Internet Crimes Against Children Task Force, after receiving a CyberTip report from the National Center for Missing and Exploited Children. The report contained information about a Twitter account that logged on Oct. 29, 2014, at a hotel in Bismarck, North Dakota, which was used to post photos of nude females “well under the age of 18.”

According to a story in the North Dakota newspaper, The Williston Herald, “the account was created at a hotel in Bismarck and the internet service used was traced to Ball, supporting documents for a search warrant indicate. The account was accessed using internet services registered to Ball’s apartment, as well as by internet addresses tied to his smartphone, police wrote in the application for a search warrant.”

On Monday, Boyle County Sheriff Derek Robbins said his department was made aware of the warrant just last week but had been unable to find Ball at his home address. “He was not on our radar.”

An officer located Ball during a traffic stop on Saturday and arrested him.

Robbins said no Boyle County charges have been filed against Ball, therefore no search was conducted here on his property or on his devices.

As of Monday afternoon, he was being held without bond in the Boyle County Detention Center.

According to Advocate-Messenger archives, Ball joined the Lancaster fire department in 1988 while he was working in a factory job. He then joined the Perryville, Boyle County and Danville fire departments in 1992, serving in a variety of roles including county training officer. In 2000, he was promoted to Perryville Fire Chief, a position he held for three years before being promoted to Danville’s assistant fire chief.

He was named Danville Fire Chief in 2006 and retired on Aug. 12, 2014, before moving to Williston, North Dakota, to become the city’s first chief fire inspector. He resigned from that position on May 22, 2015.

Several members of the community spoke with commissioners and city staff Thursday night during a special meeting held as a... read more