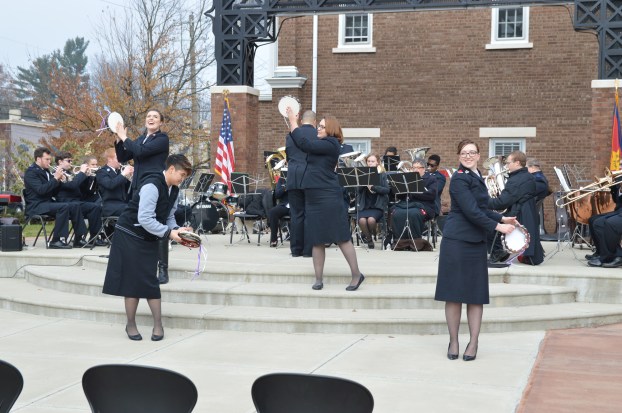 Bobbie Curd/bobbie.curd@amnews.com The timbrelists with the Paradise Brass and Arts Band perform Saturday with the band in Weisiger Park. The Salvation Army held the event as a kick-off to its Christmas Kettle drive.

The Salvation Army held a kettle ringing kick-off Saturday at Weisiger Park, complete with a 30-plus member band. Capt. Patrick Richmond said The Salvation Army Paradise Band and Arts Band has members from all over the country.

Two of those members were Capt. Richmond, playing the euphonium, and his wife, Maj. Carey Richmond, on the cornet. They’ve been the corps officers in charge of the local center for the last three years.

The Salvation Army serves Boyle, Casey, Garrard, Lincoln and Mercer counties on a budget of about $1 million. 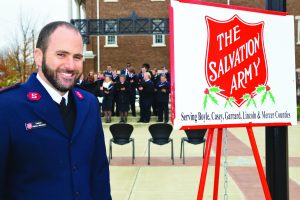 Bobbie Curd/bobbie.curd@amnews.com      Capt. Patrick Richardson says he and his wife, Maj. Carey Richardson, don’t head up The Salvation Army of Danville for the paycheck. “We do it because we love the people.”

It includes rent and utility assistance, clothing, food, a summer day camp, an after-school program and things like furniture vouchers. Whenever anyone donates any household items, like furniture or pots and pans, to the store, it can go to families at no cost to them when they show a need, he said. Families may receive vouchers from American Red Cross, or other agencies, such as in the cases of a flood or fire.

“We’re on a shoestring budget with a skeleton crew,” Capt. Richmond said. “But those who work are amazing. We have 16 total in staff. We are on 365 days a year. We’re continually working — continually. We’re pushing.”

Holidays get particularly frantic for the organization.

“We started back in the beginning of October with the Angel Tree applications,” he said. The program represents more than 400 children and 165 families. Families in need come to The Salvation Army for help, but first must go through an application process.

“They have to meet certain criteria to be put on the list, based on household income and expenses. We have a wonderful formula that puts that all together. We rarely turn anyone away,” he said.

This past weekend, The Salvation Army partnered with Centerpoint Church in preparing more than 800 meals that went out Sunday, hand-delivered by church members.

“We love Danville,” Capt. Richmond said. But it takes the full community buy-in to continue doing what they do each year.

“We can always use more volunteers,” Maj. Richmond said. She says although there’s only about 10 angels left who are up for adoption from the Angel Tree, with gifts due returned by Dec. 7, they still need help with things like preparation and gift distribution on Dec. 14.

But even more help could be used in the form of individuals donating at the kettles when they see them, even if it’s just spare change, Capt. Richmond said. 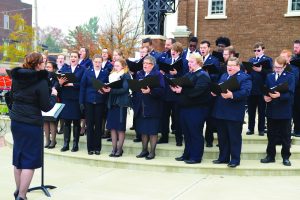 Bobbie Curd/bobbie.curd@amnews.comThe Paradise Singers perform Saturday, as part of the Paradise BRass and Arts Band for The Salavation Army’s kick-off event for the Christmas Kettle campaign.

Kroger customers can opt to buy Food Angels gift cards at the registers when they check out for $25. The store then sends the gift cards to the local office to be distributed to families.

All Krogers are participating, but the Danville and Harrodsburg locations’ cards are returned here to the local office to be used within the area communities.

“We do want to help families through hardships,” Capt. Richmond said. “But our biggest desire is to enact hope. To help with hope. To give people more than just a gift for their children or help with their rent. We would like for people to be able to see hope for what tomorrow will bring.”

He says in the three years they’ve been here, they’ve not seen any specific changes in needs. “Hardships are consistent. We never have a ‘down’ week or month. People always need food, rent and utility assistance. It’s consistent.”

Maj. Richmond said for the families who participate in the holiday programs, “It truly is the only way they are going to get food on the table and make Christmas special for their kids. We don’t get to see that on Christmas Day, per se, but we see the gratitude on every face that comes in.”

Capt. Richmond said he wishes more would come visit the office, community center and store off of South Fourth Street. He offers “talking tours,” where he takes visitors through, explaining all the behind-the-scenes action.

“They see behind the shield, what happens at The Salvation Army,” he says. “If people could get their eyes on what we do, I think their hearts will follow.”

To volunteer as a kettle bellringer for The Salvation Army, call Dana Long. To help with the Dec. 14 Angel Tree distribution event, call Maj. Carey Richmond; both may be reached at (859) 236-4473.

Bobbie Curd/bobbie.curd@amnews.com A volunteer holds the program for Saturday’s kick-off held in Weisiger Park by The Salvation Army. The event was held to celebrate the start of the Christmas Kettle campaign.

Bobbie Curd/bobbie.curd@amnews.comThe timbrelists with the Paradise Brass and Arts Band perform Saturday with the band in Weisiger Park. The Salvation Army held the event as a kick-off to its Christmas Kettle drive.

Bobbie Curd/bobbie.curd@amnews.comThe timbrelists with the Paradise Brass and Arts Band perform Saturday with the band in Weisiger Park. The Salvation Army held the event as a kick-off to its Christmas Kettle drive.

Bobbie Curd/bobbie.curd@amnews.com The timbrelists with the Paradise Brass and Arts Band perform Saturday with the band in Weisiger Park. The Salvation Army held the event as a kick-off to its Christmas Kettle drive.
You Might Like

Boyle superintendent gets an A+ from school board

Normally students get grades, but Thursday night, it was Boyle County Superintendent Mike LaFavers’ turn to be graded by his... read more