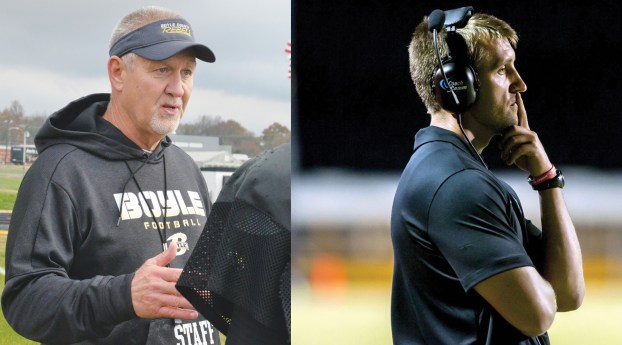 Winning is a family tradition in the Smith household.

This Thanksgiving, it’s an undefeated tradition.

Boyle County head football coach Chuck Smith has led the Rebels to a perfect 13-0 record this season. His son, Brandon, is 13-0 at 5A South Warren High School in Bowling Green.

“I think it’s pretty cool, it never really dawned on me because I don’t really ever look at records, I know he’s probably got the same kind of mindset,” Chuck said. “I just think about what we have to do to be able to win a state championship, that’s the way I look at it. But when you look back at it, you say, ‘gosh dang, father/son, 13-0,’ I think it’s really cool. I’m really proud of him and the job he’s done. I just think it’s really cool.”

South Warren High School opened in 2010 and Brandon has been a member of the coaching staff since its beginning eight years ago. He took over as head coach in 2013 and has a sparkling 72-10 record with one state championship (2015) in that time.

“It’s been pretty neat to start the program from scratch and build it the way we wanted to build it,” Brandon said. “When I took over, I really started instilling a lot of the core principles I learned and took from my father and my years at Boyle County. The scheme, the X’s and O’s really isn’t the same but the philosophy, the principles and the culture is very similar. Those things work. That’s where I got it from and I think it has helped us have a lot of success.”

In Chuck’s first stint with Boyle County, Brandon was quarterback and won three state championships from 2001-03. Brandon played college football at Western Kentucky before being hired by South Warren.

“When I went to Western and graduated, South Warren said they’d hire me so of course I jumped on it right away,” Brandon said. “When I took the job I really didn’t have any intentions of staying this long, it’s just one of those things, I took the job, one thing leads to another, now it’s nine years later, I’ve gotten married and I have a little girl. Bowling Green is a great community to live and raise a family.”

“Our reputation around here and for most years haves been defensively, we’ve had several years of really good defense,” Brandon said. “We really started off doing a lot of running. Now we’ve got a quarterback who can throw it so we’ve been throwing it around. We just adapt to our personnel offensively. We made our mark and started having success on the defensive side of the ball.”

Chuck said he and his son didn’t really talk about him getting into coaching, but it was an obvious route for Brandon because he was around football throughout his childhood.

“Being a coach’s son, he’s been around it his whole life,” Chuck said. “He was our ball boy forever, then he was around it when he played. Even in middle school he’d watch film with me and things like that because I’d be watching it at home. He’s always had an interest in it. Then I think when he went to college and played, that’s when he really started thinking about being a coach, I think. He likes the ins and outs of the game, the details of the game. I think that’s when he got the bug that he wanted to be a coach. Me and him never really did sit down and talk about it, it’s really been all his doing.”

Both coaches said that the play calling at Boyle County and South Warren isn’t the same, but the big-picture coaching is similar.

“We really don’t run a lot of the same X’s and O’s from the offensive and defensive perspective,” Brandon said. “We mostly talk about scenarios, situations, kind of the character of the team and the culture of the team. I ask him for advice on certain things all the time that has to do with that, he’s been a big help. I learned from him that that’s really what matters, it’s not really the plays that you’re running, it’s the culture and character of your team.”

“He really does his own thing, he’s independent in that mindset,” Chuck said. “He’s got his own offense, his own defense. Obviously his background at Boyle County, I’m sure there’s some of those things in there but he’s got his own twist on all that stuff. It’s not straight Boyle County stuff. He’s got a really sharp football mind, he’s good in that area … He’s done a really good job, he and his coaching staff. They’ve built that program and that culture the way they wanted. It has become a winning culture and a powerhouse of a football program.”

For both coaches, it’s a culture of winning. And for both Boyle County and South Warren, there’s two games standing between each school and a state championship. Boyle County visits Corbin on Friday while South Warren will visit South Oldham.

“We just want to get there,” Brandon said. “That’s kind of been our goal all year long is to get there. Then once you get there, anything can happen. That’s what we’re focused on right now, we’ve got a tough task. Whenever it gets to this time of year, nothing comes easy. South Oldham is a great opponent. This is another thing I got from my father, he used to always say that the hardest part is getting there. That’s proven to be true, that’s our main goal.”

So, how cool was it for Brandon to watch his father return to the state championship last year with the Rebels?

“I thought that was pretty special, I really did. That’s a testament to him,” he said. “It’s a lot of the same coaches from when I was there and in previous years when they made a run. It just goes to show that those guys know the formula, they know what works. It might be different players, a different scheme, but those philosophies and those principles are proven and they work. Give them time, they’re going to make it successful.”

It’d be an incredible feat for Boyle County and South Warren to both finish the season as champions, Chuck said.

Looking into the future, Chuck said there’s no chance of a South Warren/Boyle County game during the regular season. He said that’s not something he would want to do.

Brandon also said he’s not even thought about taking his father’s place at his alma mater.

“I just know my father, I’d have to see it to believe it before he retires,” Brandon said. “He’s never going to sit around and do nothing. I have a hard time believing he’s going to give it up any time soon, especially with the way he’s got it rolling. He’s got a lot of good players. It’s not something I’ve thought about a lot.”

“I’m just really proud of him. He’s done a really good job, he’s really got a great mind for it,” Chuck said. “He’s real insightful and he reads people really well and kids really well. Then he’s young enough to where he can relate to the new kids. He’s been able to put all that together and have the success that he’s had.”

Undefeated seasons don’t come around often, and for a father/son duo to do it in the same year? Unheard of.

“I think that’s really cool, I really do,” Brandon said. “I asked him, I don’t know if anybody has done that before. I think it’s a pretty cool feat and really it’s in large part to him. Everything I’ve learned, everything I’ve gotten is from him. It just goes to show that he’s a great teacher.”

This week at the Boyle County Public Library , October 13

The Boyle County Public Library is offering The Science in Play 2Go exhibit, currently on display in the Children’s Library.... read more