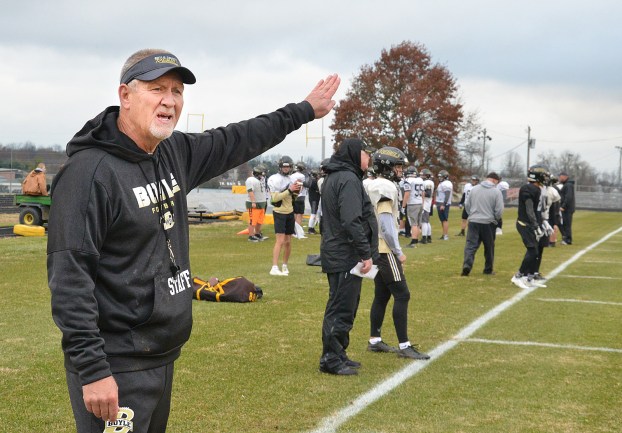 Being regional football champions takes a lot of time and preparation not only for team members, but for the coaching staff as well. And now that the Boyle County High School football team is heading to the state semifinals on Friday, head coach Chuck Smith said they have just until Thursday to “Get it done.” 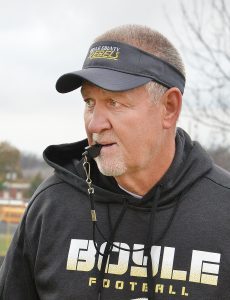 At this point in the season, Smith said the players are “solid with their footing and technique.” Now, they are “tweaking” plays in preparation for Friday night’s away game against Corbin High School.

Late Monday afternoon under threatening stormy skies and sharp winds, Smith watched his team go through drills and plays on the practice field.

The team was divided into several groups across the football field. And each group was being given specific instructions on how to best execute the drill.

“Don’t let the ball touch the ground!” he shouted at a group of players as they ran to catch a pass.

Smith then walked several yards away to watch the next group. He said the special teams were practicing and altering their plays.

“Everybody knows their assignments,” he said. “We’re making sure the i’s are dotted and the t’s crossed.”

Smith intensely watched his coaching staff work with the team. Sometimes he gave individual players advice on how to best execute their assignment.

The Rebels practice about two hours a day right now. And Smith doesn’t stand still for very long during that time. He constantly walks from one group of players to the next, up and down and across the field making sure everyone is working hard.

Smith said the plays are ones that they’ve used all season. “They know their assignments,” Smith said.

The preparation and planning for each game is what Smith likes to concentrate on. He does a lot of “film work” in the office where he watches videos of opposing teams and figures out ways his team can use their abilities and plays to win each game.

He said part of his job is to get the team to “buy into the game plan and understand it.”

Boyle County High School head football coach Chuck Smith works with a player with a stretching drill.
You Might Like