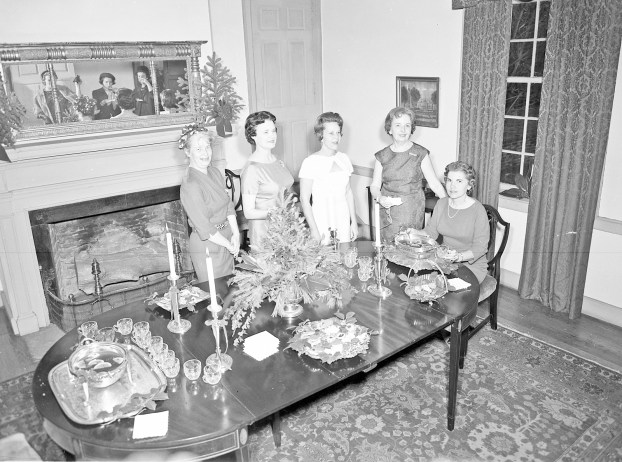 Reference Librarian Mary Girard, BCPL, from Advocate-Messenger articles. The first Green Tea to celebrate the holidays and raise money for the Salvation Army was hosted by the Garden Club of Danville in 1964. Held at the historic Ephraim McDowell House, the tea continues to be tradition of today’s Garden Club. At the tea table in 1964 were, from left, Mrs. Enos Swain, Mrs Robert K. Lewis, Mrs. Ansel Herndon, Mrs. Stuart P. Hemphill, and seated, Mrs. John Hill Bailey Jr. Mrs. Dudley E. Bryant Jr., not pictured, was president of the Garden Club that year.

The Garden Club of Danville has been celebrating the holiday season for 54 years with a tea in early December at the Ephraim McDowell House on Second Street.

The headline in The Advocate-Messenger on Dec. 10, 1964, read, “Club Gives Benefit ‘Green Tea’ In Decorated McDowell House.” At that first tea, only the downstairs rooms were decorated, using fresh greenery, fruits, berried branches, and other materials in keeping with the time when Dr. McDowell lived in the house.

The old kitchen, with a glowing fire in the huge fireplace, had greens and berries in wooden containers. 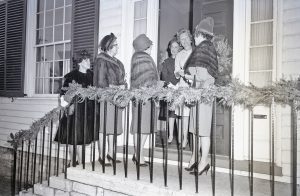 Reference Librarian Mary Girard, BCPL, from Advocate-Messenger articles.
A group of Garden Club members and guests arrive at the McDowell House in December, 1964, for the first “Green Tea.” The house was decorated with fresh greenery for the holidays, including a boxwood wreath on the door and hemlock roping draping the iron railing on the front steps. That tea was by invitation only, but everyone is invited now.

These days, every room in the house is decorated except the kitchen, which is now used for food preparation during the tea. This year’s tea will be on Sunday, Dec. 2, from 2 to 4 p.m.

In 1964, married women were identified in the newspaper by their husbands’ names and not their own first names. Mrs. Ansel Herndon (her name was Emily) was the mother of today’s Marji Hines. According to the Advocate, “Mrs. Herndon created an arrangement of greens in a silver wine cooler for the tea table. This arrangement with four silver candlesticks holding red candles tied with red velvet ribbons accented the old silver pieces.” Marji Hines will do her best to replicate her mother’s arrangement for this year’s tour.

Hines remembers that before the Garden Club took over the tea, it was arranged by the wives of local doctors. None of the women in early pictures are still alive, but the tradition they started so long ago continues much as they conceived it.

Garden Club membership is a tradition in some families. Gigi Biles is another second generation member of the club. Her late mother, Mrs. Kingsley Miller, wasn’t present for the first tea, but the two of them devoted many hours to the club over the past half century, as have Joanna Kirby and her mother, Page Dunlap. All of them helped with many Green Teas, and the daughters still do.

Three 2018 Special Projects Awards will be presented to the winners at this year’s tea. This program provides funds for community projects that carry out the mission of the club: to encourage the advancement of horticulture and creative design, aid in civic beautification, and promote conservation and protection of natural resources. Profits from the club’s popular spring garden tours are used for the awards.

Mary Girard at the Boyle County Public Library found some pictures of the very first Green Tea, along with an article describing the event. The old photographs will be on display at the McDowell House for this year’s tea. If you’ve lived in Danville long enough, you’re bound to recognize some of the names, even if you didn’t know the women personally.

What a difference the years have made. In order to attend a Green Tea in the early days, you had to be a member of the Garden Club or the guest of a member. As pictures from the 1964 Advocate-Messenger show, you were expected to dress up, too, in hats, gloves, high heels, and a mink stole if you owned one. These days the tea is decidedly casual, although you’ll likely see holiday sweaters.

Years ago, the club began opening the tea to the public at no charge. The practice of collecting donations for the Salvation Army started at that first tea and continues today. The “Green” in the name was chosen for the color of dollar bills. The club later added donations for Family Services Association of Boyle County. Thousands of “Green Tea” dollars have been collected over the years for those in need of assistance in our community.

One thing that hasn’t changed is the elaborate spread of homemade treats on the beautifully set dining room table. Club members will be baking cookies and tarts, making cheese spreads and candy, cutting out tea sandwiches, and preparing spiced cider. And, yes, Carol Seidel will bring her famous bourbon balls again. 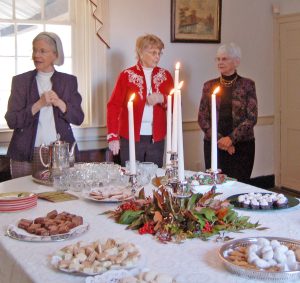 Just like those long ago women, Garden Club members will decorate each room with natural greenery and berries, fruits, and dried materials that would have been available when the McDowell family lived there in the early 19th century. Decorations at the first Green Tea relied heavily on hemlock roping, holly, apples, and red velvet ribbons. You’ll see those and more at this year’s tea. Unlike the earlier Garden Club, today’s club includes several men who will help out.

125 South Second St., Danville, No charge, but donations accepted for the Salvation Army and Family Services of Boyle County.

The Garden Club of Danville is involved in much more than growing flowers and drinking tea. Read about the club’s other activities at thegardenclubofdanville.org.

Kay Arnold puts the finishing touches on an arrangement of lemons and magnolia leaves for the dining room at a past tea. Citrus fruits were a treasured delicacy in McDowell’s day. (Photo by Andrea Perkins)

The Ephraim McDowell House was decorated by members of the Garden Club of Danville for their first “Green Tea” in 1964. Shown in the parlor with their holiday arrangements are, from left, Mrs. James F. Clay, Mrs. Dudley Bryant, and Mrs. O.L. May.Reference Librarian Mary Girard, BCPL, from Advocate-Messenger articles.

A simple arrangement of magnolia leaves and apples surrounds a candlestick on the desk in the upstairs hall. Materials used to decorate would have been available in the early 19 th century when the McDowell family lived in the house. (Photo by Andrea Perkins)

Reference Librarian Mary Girard, BCPL, from Advocate-Messenger articles. The first Green Tea to celebrate the holidays and raise money for the Salvation Army was hosted by the Garden Club of Danville in 1964. Held at the historic Ephraim McDowell House, the tea continues to be tradition of today’s Garden Club. At the tea table in 1964 were, from left, Mrs. Enos Swain, Mrs Robert K. Lewis, Mrs. Ansel Herndon, Mrs. Stuart P. Hemphill, and seated, Mrs. John Hill Bailey Jr. Mrs. Dudley E. Bryant Jr., not pictured, was president of the Garden Club that year.
You Might Like

From our files, November 24