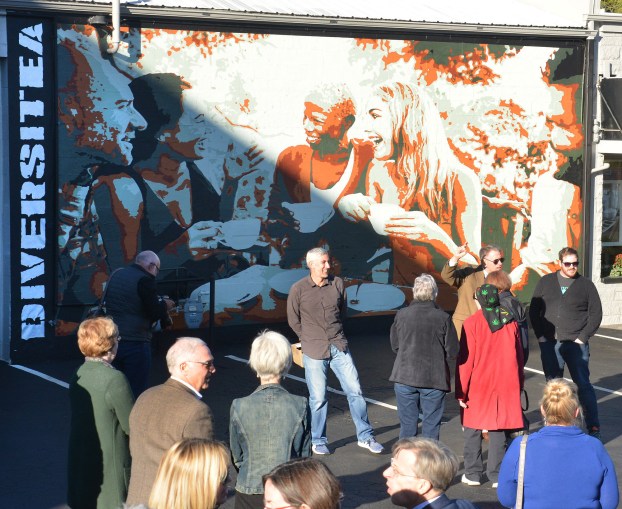 Robin Hart/robin.hart@amnews.com A mural sponsored by the Danville Sister Cities Commission was unveiled during the Boyle County Chamber of Commerce Business After Hours event Thursday evening. To the left of the mural the word "Diversitea" is temporarily attached with Velcro, until the Architectural Heritage Board either approves or denies its addtion since it was not included on the original applicaiton.

A public mural that has already been installed was approved by the Danville Architectural Board to allow additional elements.

The DAHB, which must approve all public works of art before they are allowed in the historic district overlay of the city, approved the Sister Cities Commission’s request to add a small plaque with the artist’s name, sponsor, date and mural name; and a border with the word “DIVERSITEA” on the mural it commissioned.

After the regularly scheduled meeting, board chair Tom Tye said they had an “honest and frank” discussion about the mural, at its location on the side of the Elmwood Inn Fine Teas building on North Second Street. It depicts a sepia-toned scene of a diverse group of men and women sipping tea from tea cups.

After their discussion, the board agreed the mural does represent public art, and wasn’t necessarily promoting the business.

Board member Julie Wagner said, “The mural has people drinking tea. But it still speaks to diversity in the community and could stand on its own” if Elmwood Inn Fine Teas ever vacates the building.

The mural was painted by internationally-known artist Dee Craig, who was selected by the Sister Cities Commission as the exchange artist with Danville’s sister city, Carrickfergus, Northern Ireland.

During his three-week stay earlier this fall, Craig worked on the mural at Danville High School with students and other community members. The mural was painted onto strips of canvas then glued to the building.

At the mural’s unveiling in mid-October, a black panel with the word “DIVERSITEA” was temporarily attached on left side of the mural.

According to information passed out to spectators at the unveiling by Milton Reigelman, who is on the commission, the “sepia-toned scene depicts a diverse group of individuals coming together to enjoy a shared, peaceful moment over tea. Because Craig thought of the mural’s clever title, ‘Diversitea’ only a few days ago, it is currently only temporarily attached to the building with Velcro; if the Architectural Heritage Board gives its approval, it will be glued to the wall.”

This year, 30 children and 15 senior citizens will be receiving Christmas gifts and a party thanks to the Kiwanis... read more