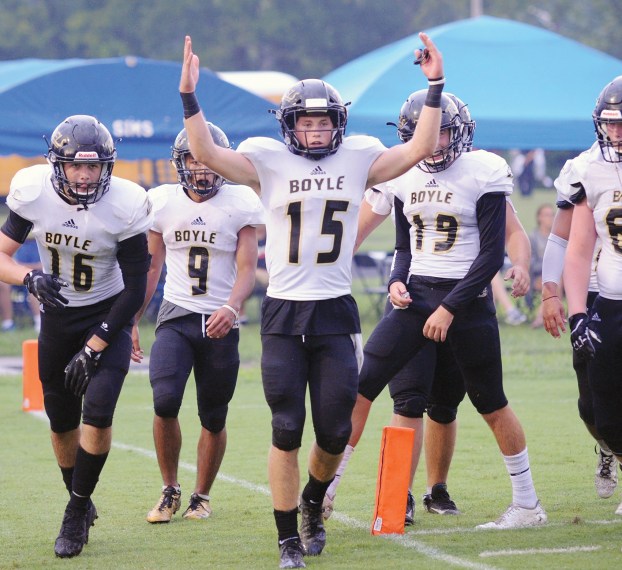 The Advocate-Messenger gives out Offensive and Defensive Player of the Year awards near the end of each football season.

This year, those awards were won by the same player.

Reese Smith is the Advocate-Messenger All-Area Football Player of the Year for his monumental impact he has had on both sides of the ball for the defending 3A state champions.

The junior has scholarship offers from Kentucky and Tennessee, among others, and he’s been recruited by D-I teams to play both safety and wide receiver.

“Everybody asks me if I like defense or offense better, but I feel like I’m about equal on both sides of the ball,” he said. “I wouldn’t mind playing either of them, I just want to do whatever I can to help my team win.”

That shows on the high school football field: This year, he’s caught 51 passes for 1,172 yards and 20 touchdowns after 11 games played. He’s got 50 tackles, has forced two fumbles and has three interceptions and one interception returned for a touchdown.

Those interception numbers are down from last year’s nine picks, but that’s partly because teams have learned to not throw the ball in the middle of the field.

“He’s a great player. He loves the big stage, when he’s on a big stage he plays his best,” Boyle head coach Chuck Smith said. “That motivates him the most. He likes the competition, he likes the competitiveness of the game in those situations. He’s got great skills, he’s very athletic. He’s proved a lot to me this year in his leadership alone, he’s stepped up as a leader on the football team. I think it has made a big difference in the success of our football team.”

The stats back up coach Smith’s claim: During the state championship last year, Reese had two interceptions, one for a touchdown. He also caught five passes for 120 yards and three scores.

Last week, in a battle at No. 3 Belfry, Reese caught six passes for 138 yards and four scores and had an interception.

Reese said his focus hasn’t really been on his play. He just wanted to have the same success this year as the team shared in 2017.

“The team last year, we had a mindset of putting Boyle County back on the map,” he said. “When that senior class graduated, my class and this current senior class wanted to keep it that way. We wanted to carry on that Boyle County tradition. I think so far we’ve done a good job but we’re definitely not finished yet.”

Comparing last year to this year, coach Smith said that his star receiver/defensive back wasn’t the leader that he is today.

“Last year he was a great player but he wasn’t really a great leader, you’d have to get on him some in practice. But this year he’s a different guy. He practices hard every play and it has shown in his game, it’s a reflection of how he plays. The example leadership has definitely shown up this year and he’s become more vocal as the season has gone on. When somebody does it first and proves they can do it, the others will certainly follow.”

Reese knew that going into the year, he and his fellow juniors needed to pick up where the 2017 senior class left off.

“It has come a long way. The seniors last year, they led us to a state championship, no doubt,” he said. “This year, it’s not just the seniors that have to lead, it’s the juniors too. We have some seniors but not all of the seniors play, a lot of juniors play. We knew that coming into the year that the juniors would have to come in and be leaders as well.”

Both sides of the ball have been hit with injuries this season, more so than the title-winning squad from a year ago. Running backs Tanner Crawford and Landen Bartleson have missed time. Two-way players Grant Hotchkiss and Drew Baker each saw their seasons end early. Both offensive and defensive lines have battled injury and illness throughout the year.

But the Rebels are still undefeated, and Reese said that’s something that has brought the team together in 2018.

“We hardly had any injuries last year,” Reese said. “Injuries this year have definitely tested how strong of a team we can be. I think overcoming those injuries, that has definitely brought us together and we’ve figured out that the team isn’t just one person or two people, it’s a whole team. We can accomplish anything we want if we do it together.

“We’ve grown tremendously since that first game of the year against Ballard. I think it has really tested us, after the Danville game was kind of a wake-up call. We were down 14-0 and I think that game helped turn us around. Then at Belfry, we were down 10-0 and that was another time we said, ‘alright guys, time to come together.’ We can’t do that this week, we’ve got to come out strong and aggressive.”

The Rebels visit Corbin for a state championship rematch on Friday at 7:30 p.m.

BELFRY — Boyle County continues to run the gauntlet. The Rebels traveled to Belfry and beat the Pirates 41-24 behind... read more