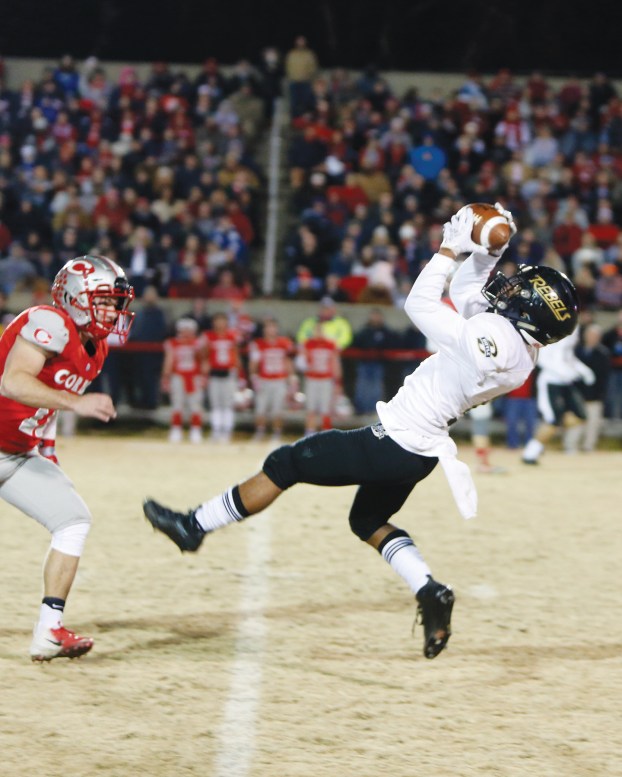 Photo by Mike Marsee/Boyle County wide receiver Reiley Colwick comes down with a catch before Corbin cornerback Taylor Johnson can reach him during the third quarter Friday.

CORBIN — There were so many things that got in the way of Boyle County’s bid for a second straight championship, but the Rebels were able to overcome them all – until Friday night.

They could not overcome a Corbin team that came looking for revenge for a loss in last year’s state finals and had the ability to overpower the Rebels in a way it could not a year ago.

Boyle was dominated from start to finish in a 21-0 loss before a standing-room-only crowd at Campbell Field that ended what had been a perfect season one win short of the state finals.

“We’ve had distraction after distraction all year long, with injuries, with sickness, it seemed like every week it was always something,” Boyle coach Chuck Smith said. “Every week we did enough to win the game, but I guess it just caught up with us and we weren’t able to recover.”

Corbin, which lost to Boyle in last year’s Class 3A title game, turned the tables to end the Rebels’ winning streak – which had been the second-longest current streak in the state – at 25 games.

“It’s one of those old-fashioned butt-kickings,” Smith said. “They were more physical than we were, they were tougher than we were and they simply wanted the game more than we did.”

Boyle (13-1) was tasked with winning in consecutive weeks at two of the toughest venues in eastern Kentucky, Belfry and Corbin, to return to Kroger Field and the state finals, and Smith said he could tell by the Rebels’ response to the Redhounds’ attack that they faced a tall task Friday.

“(I knew) when they just kept hitting us and attacking us and we weren’t responding,” he said. “We had a big win last week against Belfry and we never could recover. We knew it was going to be rough. We had to win back-to-back big games on the road.”

There were four turnovers – including three in the red zone – but those weren’t the only things that did Boyle in.

“They kept us off balance. It seemed like they were a step ahead of us in every phase of the game, and it seemed like we were just fighting to survive,” Smith said.

For starters, an offense that had averaged 41.9 points per game simply wasn’t able to strike for big plays or sustain drives.

We just had to limit the big play with them,” Haddix said. “We got them to turn the ball over a little bit and took advantage of that, and our offense was able to keep their offense off the field. That was a big part of our game plan, to keep that explosive offense they have off the field.”

A Boyle rushing attack that was averaging 188 yards per game managed only 58. Tanner Crawford ran for 48 of those yards on 12 carries, but he had only one run for more than 8 yards.

A Boyle passing game that put up 205 yards per game was held to 151, and only one pass play went for more than 16 yards. Leading receiver Reese Smith, who was averaging 4.6 receptions and 107 yards per game, had two catches for 1 yard and was targeted only about four times before leaving the game with an injury early in the fourth quarter.

“I think they just got after us. We weren’t able to run the football to open up anything, and then when we threw it, they were doing a great job of covering us,” coach Smith said. They covered us one on one and we couldn’t get open. They had a good formula.”

The Corbin offense, which had gotten just over half of its yardage through the air in its first 13 games, ran roughshod over Boyle for 220 of its 295 yards.

Seven different backs carried the ball for the Redhounds, who ran the ball on 46 of their 63 plays from scrimmage. And no one did more damage than quarterback Chase Estep, who had 81 yards and two touchdowns on 15 rushing attempts.

“He was no surprise,” Smith said. “We knew what he was going to do. We had practiced it and talked about it all week long that it was going to be him that decided their success, whether it was throwing the ball or running the ball.”

It was a 33-yard run by Estep – the longest running play of the game – that allowed Corbin to draw first blood early in the second quarter after Boyle had managed only one first down over its first three series.

Estep ran the ball to the Boyle 36-yard line, and Nick Yeager ran for 24 yards to the 1 to set up a 2-yard touchdown run by Grant Gibson.

Boyle seemed poised to answer, as the Rebels drove to the Corbin 13 before Lanter was intercepted by the Redhounds’ Cole Shelton at the 3. Corbin ran off the final 5 1/2 minutes of the second quarter, but Boyle escaped further damage when Landen Bartleson blocked Will Childers’ 37-yard field goal attempt on the final play of the first half.

The Redhounds rolled into the end zone on their first drive of the second half, however, marching 61 yards in 11 plays. Estep converted on fourth-and-2 with a 4-yard gain to the 7, then scored from there on the next play to give Corbin a 14-0 lead.

Again Boyle had a chance to answer, but a fumble on a handoff from the Corbin 11 – the first of five fumbles in the final 15 1/2 minutes – prevented that.

The Rebels’ next fumble, a botched snap, came at the Boyle 2-yard line and allowed Corbin to score three plays later on a 4-yard run by Estep to take a three-touchdown lead with 7:30 remaining.

Another fumble at the Corbin 6 gave the Redhounds the ball back with 4:19 to play, ending any hope of a comeback. Boyle was stopped one win short of a 10th trip to the state finals and the chance to play for a ninth championship.

“That’s the goal. We had a good season, 13-1, but we didn’t reach the goal that we wanted,” Smith said. “I know the kids feel bad about that, and I know they wish they had this game over, but you don’t get it. That’s part of life.”

Boyle County’s biggest question entering this season was in the trenches. Could the Rebels replace key senior starters on the... read more