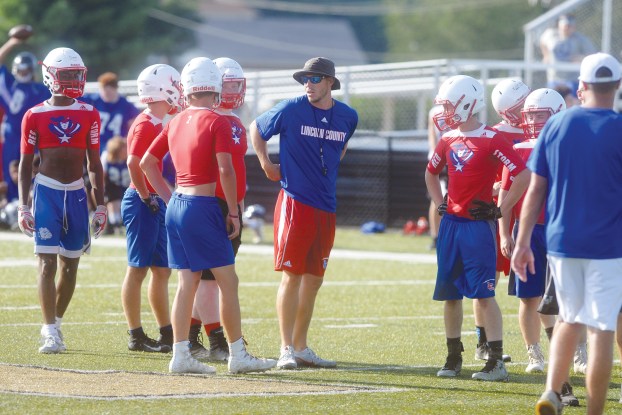 This year was Lincoln County football’s most successful season since 2007.

The man behind the change?

Crutchfield is the Advocate-Messenger football All-Area Coach of the Year for rejuvenating the Lincoln County football program to a 7-5 record in 2018.

It was Crutchfield’s first year as a head coach on the high school level, and he said his mindset coming in was simple: Change the culture.

“That’s what I talked to these seniors about, one thing they did, they built that mentality back,” Crutchfield said. “It’s a culture change. They built the foundation for changing the culture. That goes with any new coach coming in, and those guys, if they didn’t believe what I was telling them, it wouldn’t be a successful year. That’s key in getting the things done that you want as a coach. The seniors definitely helped me do that this year, they helped me make that transition easier.”

Crutchfield’s culture change was evident in just the second game of the year, when Lincoln County trounced Rockcastle County 44-13 behind a six touchdown performance from Bryson Yaden. It was Lincoln’s first win over the Rockets since 2007.

“Just trying to establish a new culture, kids buying in, I’ve got to give them a lot of the credit for having a successful year,” Crutchfield said. “Really, I don’t think it was a lot of X’s and O’s things I’ve done, I just tried to get them to understand expectations, what they needed to do to be successful.

“Lincoln County has had some success over the years, not as much lately, but there’s talent here and you can be successful if you’re put in the right situation. It was a challenge, it wasn’t something that I don’t think a lot of people wanted to take on. Being my first head coaching gig, I knew I wouldn’t walk into a title contender with my first job. I thought the talent was there, and I think there’s talent here to build and establish a program. That was one of the reasons I really wanted to take the job.”

Crutchfield said this season is the start of more successful seasons in Stanford.

“I feel like my kids played hard all year long. I wouldn’t say we executed exactly how we wanted on every play, but I could never fault their effort,” he said. “That’s one of the things I told them, in order to be successful, I shouldn’t have to coach effort. And I have to give them credit, they played their guts out every time. Even if they didn’t make the right play or execute, they were playing hard and laying it on the line. Now to keep building, we have to play hard, but that’s never going to be a question. Now we have to get better at executing.

“Hopefully more winning seasons. We’re going to go to work. We have to get better every day. We’re not going to be blessed with the most talent against the teams we play, but we’ll work hard or harder than they work every day. When you look toward the future, we’re going to play hard, we’re going to try to be the most physical team on the field day in and day out. We’ll lay our foundation on those things and let the results play out as they may.”

STANFORD — It has been three years since Lincoln County’s last playoff victory. The Patriots are hoping that changes Friday... read more