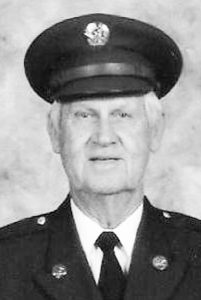 Arthur Lee “Chick” Crain, 94, passed away Wednesday, November 21, 2018. He was born in Akron, Ohio, the son of the late Clifford Penn and Mabel Goodwill Crain. He was the husband of the late Gnell Glasscock Crain who passed away in 2005.

Mr. Crain was an active member of Perryville Christian Church and was the owner and operator of the Gulf Service Station in Perryville. He served his country during World War II in the United States Army as part of the 784th Anti-Aircraft Artillery Automatic Weapons Battalion with service in the European Theater including the Rhineland Campaign, Normandy, and two other battle zones.

Mr. Crain was involved in every aspect of his community in Perryville. He started the Perryville Fire Department and was the Fire Chief for many years. He also was the Commander of the Perryville American Legion and was always available to line the Perryville Streets with American Flags for many occasions. In his younger years he enjoyed square dancing and bowling and was always ready to share the bounty of the harvest from his farm with others.

Mr. Crain is survived by several nieces and nephews and the many citizens of Perryville that held a special place in his heart.

In addition to his parents, he was preceded in death by a sister, Geraldine Crain Harmon.

The funeral service will be 11:00 a.m., Tuesday, November 27, 2018 at Perryville Christian Church with the Perryville Fire Department serving as Pallbearers. Burial with full military honors will follow at Hillcrest Cemetery. Visitation will be at the church from 5-8:00 p.m., Monday, November 26, 2018.

Honorary bearers will be nieces and nephews and Carroll Webb.

Memorial contributions are suggested to the Joni Wilder Scholarship Fund or the Perryville Fire Department.