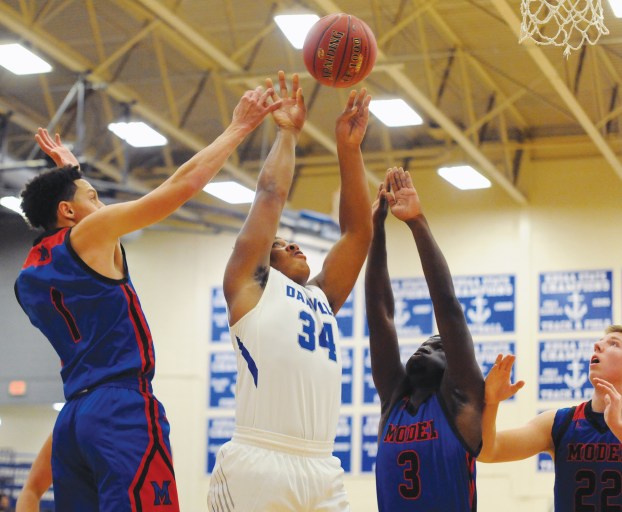 That won’t always be the case, but the Admirals were certainly clicking on all cylinders during a 91-57 victory over Model at Danville High School.

Ten different players scored for the Admirals, four in double figures. Darrian Bell led the way with 22 points, 16 coming in the first half.

“It’s always fun to get the kids out there and play,” head coach Ed McKinney said. “I’m not sure it’s going to work out like that every time, but right now I think we’ve got 11 guys that can play at the varsity level. Obviously some guys are ahead, but we’ve got 11 pretty good players, to be honest.

“Sometimes that can tear you apart, everyone wants to get minutes. But I think these guys like each other, of course it’s early. But that was a good game to get started on. I’m not sure it’ll look like that or we’ll be that liberal with substitutions.”

Bell was fierce in the opening quarter, scoring from all over the court: He was 5-for-5 from the foul line, hit one three and added two baskets for 14 first-quarter points.

Danville’s got depth from stars in other sports — Brennen McGuire scored six points in his return to basketball (he hasn’t played since sophomore year). A healthy Ethan Wood, who is known for his prowess on the pitchers’ mound, scored 12 points and had an emphatic drop-step dunk.

Thornton and Hayden each scored 12 points for the Admirals, St. Martin had eight, Damion Givens-Ford had seven and Nick Price-Hancock scored five for the Ads.

“It’s hard to figure out how we’re going to get them all in,” McKinney said. “It’s easier for me to manage that when we’re up, too. When you’re in a tough game, it’s different. And Model is better than that, we just kind of overwhelmed them at the start there. We banked a three in. It was just our night. They have two or three nice players, I was pleased with it.”

Win No. 1 for the Admirals last season didn’t come until the fifth game of the season. This year has started on the right foot, but there’s a long way to go, McKinney said. He said he wants to see his team play better defense with a lead, and added that the shots won’t always be falling like they did Monday night.

“I thought we weren’t very good defensively in the second half,” the coach said. “These guys haven’t had a ton of games where we’ve been up like that. You’ve got to learn how to handle those, learn how to come out with more intensity.

“I told them, there’s going to be nights where Dante, Zach, DeShaud, they only get four. And it’s not because they play bad, we’ll just read and react to who’s open. I think we can easily have six guys lead us in scoring. Tonight, the ball just went in the basket.”

Centre pummels Presidents 54-13 in opening round of NCAA tournament

Centre looked comfortable in its third-ever NCAA tournament. The Colonels were excellent against Washington & Jefferson, a mainstay in the... read more