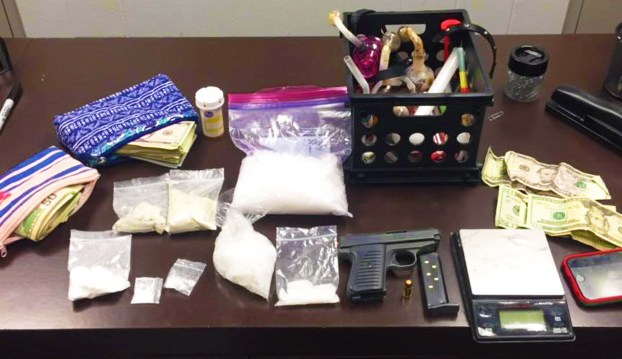 Photo courtesy of Boyle County Sheriff's Office Sheriff Derek Robbins provided a picture of the drugs, a gun, money and paraphernalia taken from a home during Tanisha Berry's arrest Sunday. Berry was charged with three counts of trafficking (cocaine, heroin and methamphetamine) and wanton endangerment due to a juvenile being in the house.

One arrested after ‘pretty massive bust’

Boyle sheriff’s deputies were already having a busy week by the time Monday rolled around. Sunday afternoon, a large drug bust went down late in the afternoon, after an investigation wrapped up; Monday afternoon, a local man was arrested on a federal warrant.

Sheriff Derek Robbins said an ongoing investigation proved successful when deputies executed a search warrant at 427 Earl St. and found one of the largest amounts of drugs they’ve seen in some time.

Tanisha Berry, 36, was arrested Sunday afternoon without incident and charged with three counts of first-degree trafficking.

“We found 21-plus grams of cocaine; 70 grams of heroin; and the most meth we’ve seen in some time — 1.2 pounds,” Robbins said. The sheriff said authorities had been watching the house for a while, and established enough probable cause to execute a search warrant. “It’s a pretty massive bust.”

A handgun and clip, scales, large amounts of cash, other narcotics and several paraphernalia items were also found.

Berry was also charged with first-degree wanton endangerment due to a juvenile being on the premises. She’s currently lodged in Boyle County Detention Center on a cash bond of $15,000.

On Monday, Danville Police Department was called in to back up sheriff’s deputies who were executing a federal warrant on a Danville man.

Deputies received information that Lamar Montez Ford, 30, was living in an apartment complex on Shawnee Road, off East Lexington Avenue.

When they arrived, Ford wouldn’t answer the door, and authorities “banged on the door for about 20 minutes or so, to give him an opportunity to answer,” Sheriff Robbins said. “We finally just went in and got him.”

Ford was initially arrested on Sept. 20 by the sheriff’s office, after a lengthy investigation resulted in charges against him for possessing approximately 800 dosage units of Fentanyl that was hidden in his apartment. Fentanyl is a schedule II narcotic and synthetic opioid. It is used illicitly in place of heroin, but is many times more powerful and more likely to cause an overdose.

Ford was charged with two counts of trafficking and driving on a suspended license in September, but has since been federally indicted and was wanted by the United States Marshals Service.

“He had bonded out on his state charges, then was indicted federally and a warrant was issued,” Robbins said. Although Ford was arrested, without incident, and charged with contempt of court, his trafficking charges will be taken over by federal court.

Ford is being held in the Boyle Detention Center on a cash bond of $20,000.