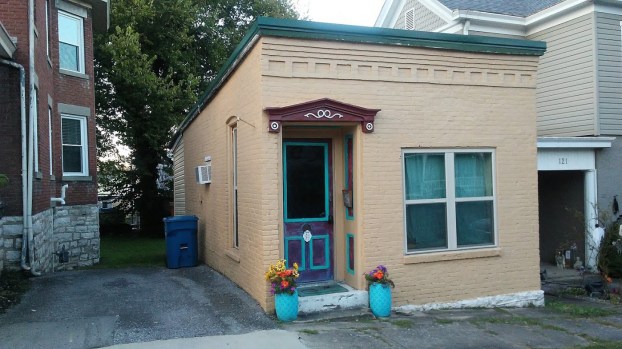 Photos contributed Ruby's Jewel Box Bauer says the "tiny house" movement is not really new. One can see how a small 1888 shot gun style building has been re-purposed for today's visitors in downtown Harrodsburg. Now called Ruby's Jewel Box, so named because it was Ruby's Jewelry Store from 1976 to 1984, one can hardly imagine it being a bank prior to that time. A local banker who worked there said it was so small that when the examiners came they had to set their card table up on the sidewalk out front.

HARRODSBURG — Although the Harrodsburg Historical Society’s big fundraiser is almost 30 years old, one of the organizers says there’s always something new to experience, or taste.

The annual Holiday Homes Tour & Tea Room opens up Friday, with the tea room at Morgan Row, the society’s headquarters at 220 S. Chiles St. A chance to sip tea with homemade soups, sandwiches and desserts will be open to the public from 11 a.m. to 2 p.m. Friday, and 11 a.m.-3 p.m. Saturday. 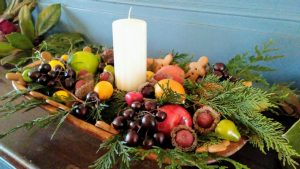 Photos contributed
An arrangement on display on the sideboard at Morgan Row.

No reservations will be taken in order to dine in, but carry-out orders are available by calling the society. Marian Bauer, a society member and one of the longtime coordinators, says the most expensive choice is a country ham sandwich, priced at $3.50. Other offerings include oyster stew, vegetable soup and chili; sandwiches made with pimento cheese, chicken salad and olive nut; and various assorted desserts.

“We don’t take reservations, but we can suggest the best time to come in order to ensure we have people on-hand to assist,” Bauer says.

The Holiday Homes Tour will be 11 a.m.-5 p.m. Saturday. Participants will receive a $1 discount off admission to Ragged Edge Community Theatre’s production of “A Christmas Carol,” performed by the theater’s managing director, Allan Barlow. The show goes up at 7 the evenings of Dec. 7-8, plus a matinee is offered 3 p.m. Sunday, Dec. 9.

“But if they want to participate, they must bring their tour booklet to apply the discount when they purchase theater tickets,” Bauer says.

The Holiday Homes Tour ticket is $15 per person, or $11 for senior citizens or groups of 20 or more.

Although this is the society’s 27th year, Bauer says each year is different. “There may be places that have been on tour in years past, but it is an opportunity to see them again with ‘new’ eyes.  This year, we will be focused on the unique contributions of those who came to this area and made significant contributions.”

Morgan Row, which houses the Harrodsburg Historical Society and serves as tour headquarters, is reputed to be the oldest row house west of the Allegheny Mountains, Bauer says. It was built between 1807 and 1830 by Squire Joseph Morgan, and later purchased by Morgan’s son-in-law, John Chiles for whom the street is named.

“It became the major stage coach stop and tavern as Chiles had stage contracts extending largely over Kentucky,” Bauer says. “Although the stagecoach no longer stops here, it still is providing some of the same services as when it was built.”

Live music will also be on-hand during the tour by various groups.

Photos contributed Picture of the Moses Jones House circa 1810 and some interior pictures. This is at Warwick.

Photos contributed Picture of the Moses Jones House built circa 1810 and some interior pictures. This is at Warwick.

Several members of the community spoke with commissioners and city staff Thursday night during a special meeting held as a... read more