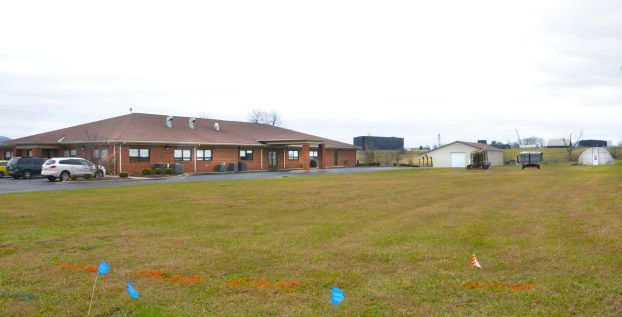 Photo by Robin Hart/robin.hart@amnews.com The Boyle County Cooperative Extension Office is planning an expansion project behind its building on Corporate Drive. The Extension District Board is looking over plans to add on to and remodel the existing building, expand a machinery storage shed, add a maker's room for messy projects and build an arena.

Extension building expansion on the horizon, board chair says movement expected by spring

The Boyle County Cooperative Extension Office is “busting at the seams” and an expansion plan has already been devised. However, it’s going to take a while longer before decisions can be made about when to start it, if it will be done in phases or all at once, according to Sue Ferguson, chair of the Ag Extension District Board.

“This building is busting at the seams. There’s over 100 days of the year that there’s no room available” for community or extension events, she said. And with the addition of a horticulture agent, she said now there’s even less office space, storage rooms and cabinets for class and event supplies.

Ferguson said in 2015, there were 552 meetings held there; of those, 94 non-agent groups used the space. She said 87 different times, all of the rooms were occupied, and speculates those numbers have probably doubled.

The Extension building isn’t just for 4-H kids. She said it’s important to know adults from Homemakers groups to Bee Keepers and master gardeners use the facility constantly. And other groups use it for special luncheons and meetings.

Sitting inside a conference room, Ferguson steps up to a window, pointing to land the extension office owns behind and beside its building on Corporate Drive. It’s surrounded by property being developed by Wilderness Trail Distillery, Boyle County Technical College and Megitt on the opposite side of the road.

Ferguson said the organization’s County Extension Council, or CEC, came up with items on a wish list needed to best serve the local residents and presented it to the overseeing district board. The CEC is made up of people from the community who represent extension agents’ disciplines, such as agriculture and natural resources; 4-H youth development; family and consumer sciences; and horticulture.

This list has items the board agreed with, Ferguson said, but not everything can become a reality.

Mercer and Madison counties’ extension offices have expanded within the past five years and are designed as campuses, which is what Boyle would like to eventually have.

“So, in a perfect world, we will have this building expanded; a makerspace, which will also have some long narrow place so (archery club members) can learn to shoot straight arrows. And then we’ll have some kind of arena,” where 4-H members can learn how to show their animals in competition, she said. The arena was needed because the one at the fairgrounds won’t be available when and if the fairgrounds are sold.

The District Board has already hired an architect and they have “beautiful” plans for the expansion, Ferguson said.

“He came up with a plan and how much it’ll be. If we do it all at once, it’s a lot of money,” Ferguson said. Or they can choose to “part it out.”

The Boyle County Cooperative Extension Office is funded through property taxes. The current tax rate is .04955 or 4.955 cents per every $100 of assessed value. That means someone with a $100,000 home pays $49.55 annually to the office’s special taxing district.

Boyle County Judge-Executive Harold McKinney, who serves on the extension district board, said it is “using due diligence” in making sure the expansion project can be paid for. He expects the board to use some of its reserves to pay for the expansion, along with a traditional loan.

“It’s a huge project. If it’s a perfect world we’ll do it all at once. I can’t promise you that we will,” Ferguson said. She said by spring, things should start moving.

The importance of family support for people trying to overcome addiction may not be fully recognized by culture or current... read more