Figurine appearing as Santa is actually a German entity, Belsnickle

Question: Dear Jerry, I’ve had this Santa figure since I was a child. An elderly neighbor gave it to me and I treasure it. I’m an old lady now and she was, I thought, ancient at the time.

His little suit is red felt and his face is some type of painted plaster. He stands about four and a half inches high. The bottom is marked Germany. He’s in good condition for all his age but he is a little faded and his little white tree is kind of fragile. I guess that he dates to the 1920s? What can you tell me about him and does he have any value? Thanks for looking at this for me. I love your articles and share them with friends.

Answer: Well, some would call him Santa but from where he’s from he would be called a Belsnickle. Belsnickles come from Southern Germany where there is the tradition of a grumpy old man with fur trimmed robes who brings gifts to good little children. Now, Belsnickle isn’t St. Nicholas or what later became Santa Claus. The Belsnickle goes by himself and unlike Ol’ Saint Nick, he doles out gifts and punishments. What you call a Christmas tree, in fact, is a branch that could be used to whip naughty children, in conjunction, he also carries a pack on his back loaded with cakes, pastries and candy for good children. 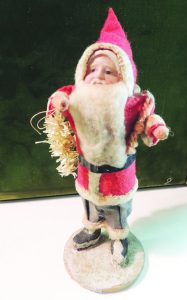 His tradition runs long and deep in Germany and America. In America, his first written account was in the 1830s in Maryland and is a collection of essays by Jacob Brown, who wrote about the differences between Santa and Belsnickle. Though I believe, he was loved long before this time period. His presence was also known in Pennsylvania, Indiana and other German-based communities. Belsnickle is still loved and admired in many parts of Europe. However, in America, he has largely been replaced by the, somewhat overly benevolent, Santa Claus.

I’d say that your example dates from the 1890s to the early 1920s. Belsnickles in red robes and white robes, like yours, are fairly common. BUT, figures that are clad in colors like blues, green and browns can make collectors swoon for period examples. These fetch hundreds and hundreds of dollars. Only a few pieces are clad in yellowish mustard colored robes. These can fetch upwards of a thousand. Collectors also seem to focus on either, small or large Belsnickles. Yours is toward the small side.

So many of these were tossed out in favor or more modern versions. Many were loved to death or fell to deterioration over their lives. The market is strong for pieces like yours. I’d wager that at a good Christmas / holiday show he’d be priced at about $70. Thanks for sharing him with us.

By SUSAN JONAS Contributing columnist The Garden Club of Danville has been celebrating the holiday season for 54 years with... read more