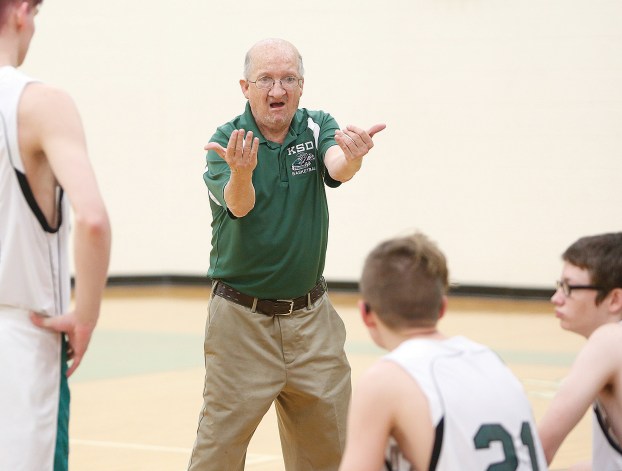 Photo by Mike Marsee Kentucky School for the Deaf basketball coach Mike Yance is beginning his 12th season; the team has gone 105-175 during his tenure. “I look forward to this team going up against the other deaf schools and challenging the other teams,” he said.

Mike Yance talks about getting out, but he isn’t likely to leave the sideline any time soon.

Another basketball season is beginning at Kentucky School for the Deaf, and it probably won’t be a good one. And Yance, who is starting his 12th season as coach of the school’s boys team, is frustrated and fired up at the same time.

On one hand, he is struggling to stay motivated and to motivate his players as a stretch of lean seasons is starting to grow. KSD has gone 3-23 over the last two seasons and will put a young team on the floor this season.

“I want to quit, but my wife said no, we need the money,” Yance joked, speaking through an interpreter.

On the other hand, he looks forward to seeing what his young team can do as the season unfolds and beyond this year.

“I look forward to this team going up against the other deaf schools and challenging the other teams,” he said.

That starts this afternoon, when the Colonels open their season against Ohio School for the Deaf in the KSD Basketball Kick-Off Classic. KSD was scheduled to open its season Thursday against Burgin, but the game was changed to a junior varsity game. It will play as many as four games over the next two days in the Kick-Off Classic, a multi-team event for boys and girls teams at Thomas Hall.

Yance has coached basketball for more than 30 years, and he has led KSD’s teams since 2007. Only one current boys coach in the 12th Region, Rodney Woods of Wayne County, has had a longer uninterrupted tenure at his school. Woods is entering his 33rd season at Wayne, while Don Irvine is starting his 16th season at Burgin over three different stints.

“Basketball has always been my passion, but the last few years the passion has gotten smaller,” he said.

Make no mistake, however: It’s still there. Whether it’s a JV game in a nearly empty gym or the biggest game on the schedule, whether he thinks he can win or knows he cannot, he is active on the sideline, teaching and cajoling and sometimes pleading to help his players learn the game and give him their best effort.

“Sometimes I feel hopeless, but I still encourage them,” Yance said.

Times have changed for KSD basketball, however, just as they have for the entire school. More deaf and hard of hearing students are being mainstreamed into schools in their home districts, which has caused KSD’s enrollment to dwindle and led to a smaller pool of potential players.

“There are many wonderful deaf players all over the state, but they’re not coming to KSD,” Yance said.

Those who do wear the green and white often come to KSD with little or no basketball experience before joining the middle school or high school team.

“Some of these kids have never played basketball before until they arrive here, and all of a sudden, boom, they’re on the varsity,” Yance said. “It’s tough because they don’t have that basketball IQ.

“During the summer our students go home because they come from all over the state, and they don’t have that chance to practice and play like the public school kids do, and the public schools have youth programs that we don’t have.”

Yance came to KSD after coaching at schools for the deaf in Minnesota, New Mexico and North Carolina.

“My wife loves it here, so we’re not leaving,” he said.

He also worked as an assistant coach at Gallaudet University and with a U.S. team in the Deaflympics.

He is not, however, the most prominent coach in his family. His brother-in-law is Allan Bristow, who had a 10-year career in the NBA with the Philadelphia 76ers, San Antonio Spurs, Utah Jazz and Dallas Mavericks and was head coach of the Charlotte Hornets for five seasons after stints as an assistant coach in San Antonio and Denver.

And these days, he isn’t even the winningest coach in his own home. His wife, Tina, has coached KSD’s girls basketball team for the past two seasons after coaching volleyball at the school for several years.

“I have more experience than my wife does, but last year her team won three games and mine won one,” he said with a smile and a shrug of his shoulders.

When he turned serious again, he said he has enjoyed watching his wife coach.

“She’s always been very supportive in helping me, and I help her, too. I really am blessed to have her,” Yance said.

Tina Yance may not have a team to coach this season, as there currently aren’t enough girls interested in playing to field a team. A few girls are practicing, but the girls team’s scheduled games in this weekend’s Kick-Off Classic were canceled.

“We’re still hopeful some girls might change their mind and join the team,” Mike Yance said.

Yance hopes the boys program doesn’t head in the same direction. There are 11 players on the roster this year, and that roster skews young with only one senior and five eighth-graders, freshmen and sophomores.

Yance said he wouldn’t mind moving to Florida and playing golf all year ’round, but he also would like to stick around at least long enough to see those young players through school.

“I would really like to wait and see them as they progress through high school,” he said. “I tell them, ‘Don’t worry about this year. You’re just starting out and you’re young. A few years down the road, you could win many games, so keep at it.’”

He’d also like to be on the bench next season when KSD hosts the Mason-Dixon Tournament, the conference championship for schools for the deaf from across the South that is the biggest event on the KSD schedule each season.

KSD hosts the tournament once every 11 years, and the Colonels were runners-up when they last hosted it in 2009.