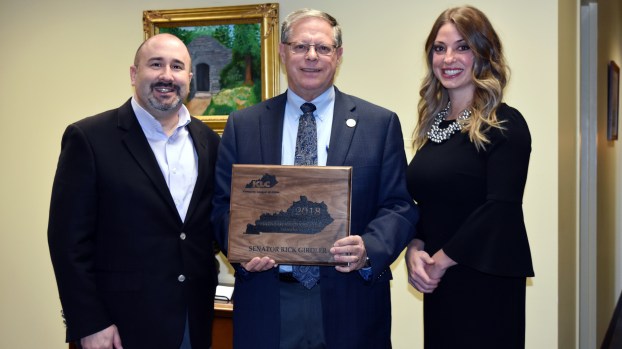 “We appreciate Senator Girdler stepping up on behalf of cities in the 2018 session,” said KLC Deputy Executive Director J.D. Chaney. “He took on two key issues and worked to ensure their passage. The prohibition on unfunded mandates was a top legislative priority, and Senate Bill 97 provides city leaders more clarity in annexation issues. Senator Girdler has been a strong ally for cities, and we welcome his support on crucial pieces of legislation.”

“It is always encouraging to have legislators like Senator Girdler who understand that decisions on issues such as annexation and the utilization of local tax dollars are best made at the local level,” stated KLC Executive Director/CEO Jonathan Steiner. “We are proud to present Senator Girdler with this award and thank him for his willingness to advocate for legislation that promotes home rule.”

Senator Girdler thanked KLC for the recognition. “I am always willing to support legislation that benefits the cities in my district and across the state. It is important that those of us in Frankfort give local elected officials the tools they need to help cities grow and prosper. I am grateful to the League for this award, and I look forward to working with them again on legislation that improves our local communities.”

Founded in 1927, the Kentucky League of Cities is a membership association of more than 370 cities across the commonwealth. KLC confers the “Friend of Kentucky Cities” award on legislators who perform outstanding work advocating for issues that impact cities across the state.