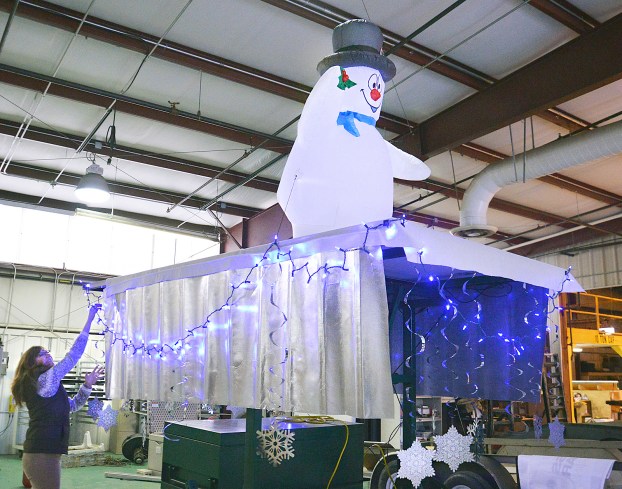 Photo by Robin Hart/robin.hart@amnews.com Laura Zaspel adjusts lights on the Wilderness Trace Solar Inc. float Thursday morning. This is the first tiime the company has participated in Danville's parade and Zaspel said she was "over the moon" to be in the parade.

If you want to see Laura Zaspel get excited, talk to her about parades.

“I’m over the moon that we can be a part in the Christmas parade! I challenge everyone to be a part of it,” said Zaspel, office manager at Wilderness Trace Solar Inc. in Danville.

“I’m on fire! This is my thing,” Zaspel said, laughing as she was making sure the company’s solar-powered float was ready for next Saturday night’s Heart of Danville Christmas parade.

The theme of this year’s parade is “Christmas Movies.” The classic “Frosty the Snowman” was perfect for the solar panel company, Zaspel said. 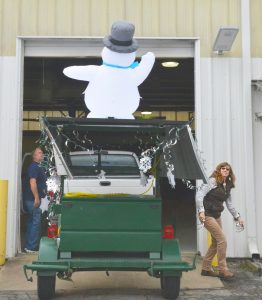 Photo by Robin Hart/robin.hart@amnews.com
Frosty the Snowman, on top of Wilderness Trace Solar Inc.’s portable solar trailer, is a bit too tall to go through the company’s garage door after Laura Zaspel, far right, had him inflated and the lights turned on checking to see if the float was ready for next Saturday’s Danville Christmas parade.

An inflatable Frosty the Snowman figure will be riding high atop a solar panel attached to a portable solar trailer. In the movie, the sun chases Frosty away. But in Danville’s parade, the sun’s solar power will be what keeps Frosty “alive” and his Christmas lights glowing.

“A solar-sponsored snowman in the Christmas parade is pure magic,” Zaspel said. Even Frosty’s eyes, which are traditionally made of coal, adds a twist to Frosty’s story, because Wilderness Trace helps people generate electricity from the sun instead of coal, Zaspel said.

This is the first year Wilderness Trace Solar Inc. has been involved in Danville’s parade and Zaspel’s enthusiasm is apparent. “I’m a nut about the parade,” she said. “And it’s all for the kids.”

The portable solar trailer being used in the parade has just returned from a farmer’s experiment — he was testing it for use with one of his greenhouses in Rockcastle County, Zaspel said.

Today is the last day for parade entries to register with the Heart of Danville. Participants can be floats, walking units, musicians, bands, classic cars, horses or any groups that wants to walk or ride down Main Street. Signups are due by 4 p.m. today and can be completed by visiting bit.ly/2yG9Hem or stopping by city hall for a paper application.

The 38th annual Christmas parade will be Saturday, Dec. 8, at 7 p.m., following the Mayor’s Christmas Tree Lighting event at Weisiger Park at 6 p.m. A public reception will then be held at the Community Arts Center, where the Danville Children’s Choir will be performing.

Also on Dec. 8, the Danville Fire Department will have its annual chili super at 5 p.m. to collect toys for its Toys for Tots program.