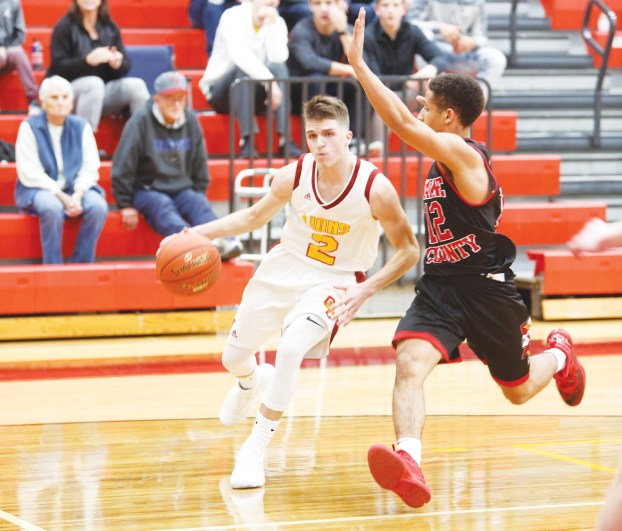 Photo by Mike Marsee Brock Milburn (2) of Garrard County drives toward the basket against Wayne County’s Jadon Pryor during the first quarter Friday.

LANCASTER — Garrard County figured to face an uphill battle in its season opener, but Ryan Young wanted his team to see what it’s like at the top of the hill. 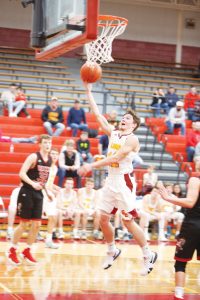 Photo by Mike Marsee Garrett Wesley, center, of Garrard County gets through the Wayne County defense for a layup during the third quarter Friday.

Young scheduled perennial regional powerhouse Wayne County for the Golden Lions’ first game Friday night, and it did not go well. Garrard dropped an 85-50 decision to a Wayne team that has been tabbed as the preseason favorite in the 12th Region.

The Garrard coach was disappointed with the way the Lions played, particularly after they got off to a good start. But he also was determined to give them a good look at the type of program he’d like Garrard to aspire to.

“That’s the type of team that is a regional contender, and that’s who we want to be,” Young said. “I hope playing them early kind of opens our eyes. … Those are the type of teams that we have to beat if we’re going to do what we want to do here.”

There is considerable difference between Wayne, which is among the very best teams in the 12th Region more often than not, and Garrard, which hasn’t been to the regional tournament since 1999. That was evident in the second and third quarters Friday at Garrard Middle School, as the Cardinals passed the Lions on the fly and never looked back.

“The biggest thing I want our guys to learn is that good basketball teams are going to make runs, they’re going to make plays,” said Young, who became the first Garrard coach of the eight the program has had since the 2007-08 season to begin a third season at the school. “I was just really disappointed in my leadership tree tonight as far as rallying our troops, our communication in the second half.

“We’ve got to get over being shell-shocked when we play good opponents, and also when we have a great crowd. In three years we’ve had probably three good crowds, and we’ve laid eggs every time. I don’t know if we’re going to have to clear the gym or what. But I was very appreciative of the community.”

The Lions gave their lively student section plenty to cheer about in the first few minutes of the game. They scored 10 straight points, including five by Brice Burkhart, to take a 14-7 lead with 1:57 left in the first quarter, and they led 16-10 at the end of a period in which they hit seven of 14 shots from the field.

But there were signs of trouble. Braden Sebastian, last year’s leading scorer, went to the bench after committing two fouls in the first three minutes, and Burkhart, another of the Lions’ top scoring threats, picked up his second foul early in the second quarter.

“The foul situation early on made us play mixed lineups. We did really well with it in the first quarter, but I don’t think that we had a couple guys get into a good rhythm of the game, and that affected how we played on the defensive end,” Young said. 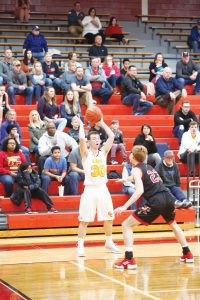 Photos by Mike Marsee
Ethan Wall (30) of Garrard County looks to pass the ball as Wayne County’s Thomas Spencer guards him during the first quarter Friday.

Wayne drew even at 23-all midway through the second quarter and used its 10-0 run to nose in front. The Cardinals then stepped on the gas in the third quarter, when they hit 14 of 17 shots from the field – including four of five from 3-point range – and outscored Garrard 36-15 to take a 69-42 lead.

“In the second half, (our players) moved to the other end of the floor (on defense). We’re not right on top of them and we can’t tell them everything that’s going on, and our communication was just poor in the second half.”

The Cardinals also got baskets in transition from their defense, which forced seven Garrard turnovers in the third quarter and 20 in all.

Sebastian led the Lions with 13 points, and Burkhart added 12. Charles Jones had a game-high eight rebounds for Garrard.

The Cardinals had five players in double figures, led by Thomas Spencer with 21 points and Aubrey Weaver and Nathan Burks with 16 each.

Garrard will have little time to dwell on its first loss, as the Lions will be back in action this afternoon against Buckhorn in a showcase at Berea and will host Mercer County on Monday.

“We’re going to get back to work,” Young said. “This is one of 27, and it doesn’t determine our season if we learn from it and grow from it.”

Mike Yance talks about getting out, but he isn’t likely to leave the sideline any time soon. Another basketball season... read more