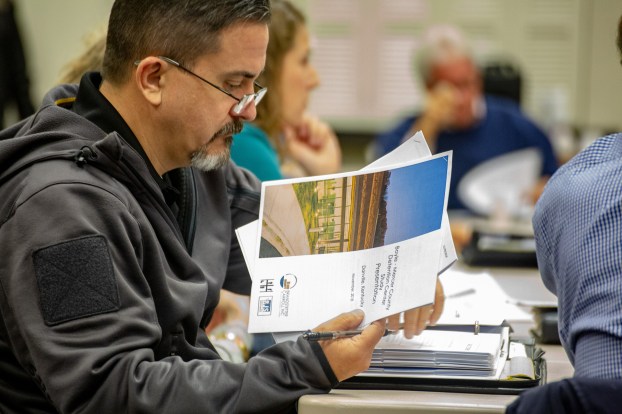 With a massive $75,000 study of the jail and criminal justice system in Boyle and Mercer counties complete, it’s time for leaders to decide what to do with the study’s findings.

The recently created Criminal Justice Coordinating Council will hopefully spearhead efforts to implement recommendations from the study, including the possibility of building a new 450-bed jail, said Eric Chambers, a consultant with Brandstetter Carroll, the company that completed the study for the Boyle-Mercer Joint Jail Committee.

Chambers and the two other lead consultants, Dr. Allen Beck and Dr. Kenneth Ray, presented a summary of their study’s hundreds of pages to the public on Thursday, in a forum at Inter-County Energy that lasted more than two hours.

“We know it’s an arduous task,” Chambers said of tackling the numerous issues identified in the study as causes of chronic overcrowding in the Boyle County Detention Center. “This thing didn’t happen overnight; it’s not going to be solved overnight.” 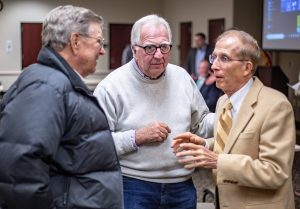 Ray said the way Boyle and Mercer counties proactively sought answers to their jail problem and included the public throughout the study’s process is “the way the National Institute of Corrections has always dreamed it should be.”

“Y’all did this right. And what I mean by right is you kept it transparent,” Ray said. “You kept the process open and you kept the community informed. That’s not normal.”

Ray and Beck both have lengthy careers in criminal justice and jail consulting; Ray said they just finished up a study for another community a little while ago, where the leaders decided to keep everything private and not involve the public. That strategy has backfired badly.

“There, you have a community feeling like they’re having an $80 million jail forced down their throats,” Ray said. “Here, it was the way it’s supposed to be.”

The study finds that the jail population has grown over the years due to multiple factors, including a reluctance by Circuit Court Judge Darren Peckler to let defendants out of jail without paying money; very slow case processing times; and a practice of re-jailing defendants who are successfully out on bond when they are indicted.

It also documents systemic and chronic overcrowding in the jail as a result, and details the inadequate design of the jail to hold or care for so many inmates.

Despite that, “you did a heck of a job keeping the reins back on this thing,” Ray said of the officials charged with paying for and managing the jail.

Ray’s portions of the study warn that the inability to properly separate inmates and the lack of medical, behavioral and mental health spaces leaves Boyle and Mercer at risk of a lawsuit on constitutional grounds. That’s not a problem unique to Boyle and Mercer, he noted — “it’s only gotten more challenging for the rural areas. In the U.S., the rural areas are getting hit the hardest.”

Ray said the American Civil Liberties Union and the U.S. Department of Justice “have got the crosshairs on the rural jails” in the country.

“The trend is at a cadence toward holding jails even more accountable for the care and protection of inmates,” he said. “At the same time, inmates are older, inmates are sicker, and more inmates have behavioral problems and mental illness. … That translates to cost and risk.”

As they presented the study’s findings, Beck and Ray acknowledged the fact that the jail population has decreased in the months since their study began. Ray wasn’t surprised, nor was he optimistic the change would be permanent.

“Don’t let that fool you. In my experience in this line of work, I have never seen it last,” he said.

Ray said when he and Beck come in and do a study, they always “stir things up” and changes happen as the study is being completed. “But those are not systemic changes. Don’t consider those permanent changes. A permanent change requires a structured, systematic approach.”

A portion of the study Beck worked on acknowledges that attorneys have begun pursuing non-financial and lower financial bonds for their clients recently, which may be helping to lower the number of people kept in jail on financial bonds.

Public Defender Jessica Buck told The Advocate-Messenger previously she has seen “significant changes” specifically in Peckler’s circuit court with regards to the setting of bond: More defendants are finding themselves able to make bond.

“I don’t know why it’s occurred, but I can say the fact that it has occurred — credit goes solely to Judge Peckler, because he is in charge of setting the bonds,” she said last month. “So something has happened that he is setting more reasonable bonds, which is a vast improvement.”

On Thursday, Beck told those gathered for the study’s public presentation that nailing down exactly what is leading to the lower jail population will be essential to continuing the trend.

“Why is the jail population going down right now? I don’t know right now,” Beck said. “What the question comes out to be is … is it going to be like that in the future? Is it going to go back up? We’ve got to know why that happened. … The question, ‘Why?’ is what’s going to help us use this information for the future.”

Beck said based on his examination of the local criminal justice system, Boyle and Mercer have “four flat tires.” Fixing one flat tire accomplishes essentially nothing — all four must be fixed to get things back on track. The equivalent of fixing all four flats is implementing all the recommendations in chapters two and three of the study, he explained.

Chapters two and three call for reducing the use of financial bonds, ending the practice of re-jailing for indictment, ending the blanket use of “no bond” for defendants in the “Rocket Docket” program, creating a state-certified drug court, using “graduated sanctions” and other alternatives to re-jailing when defendants mess up while out on bond and increasing the use of diversion and deferred prosecution, among other things.

“These are the things that affect not only the bloating of the jail, but they affect people’s lives,” Beck said. “Let’s do the right thing. What I want to do is I want to increase the likelihood that we’re going to make (positive) change in people’s lives.”

Beck said Kentucky already has “one of the best pretrial release programs in the country,” and Boyle and Mercer counties could be using it far more effectively.

“We can move more people out of jail who need to be out,” he said. “The longer we keep them, the more it bloats our jail. I’m going to use the word bloat because it’s puffed up like it shouldn’t be.” 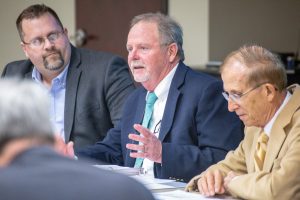 3DaysCount aims to decrease the number of people spending more than three days in jail pretrial, because research has shown negative effects — both on individuals incarcerated and in terms of future crime — from holding people longer.

Beck pointed out someone jailed for three days or more could lose their job or not be available to take care of a child or an aging parent. At the same time, nearly everyone who is in jail now will eventually be back out “among us” at some point. But now they will be jobless and their family could face additional hurdles.

“This is a human thing,” Beck said. “… Let’s set up a system that increases the likelihood of reducing the behavior we don’t want.”

Ray pointed out that the female population in the jail has grown from 22 to 26 percent — “a pretty big jump.”

Ray said research has shown that jailing single mothers can have long-term negative effects for society because the mothers’ children develop psychological problems, are more prone to drug abuse and more likely to have numerous other problems.

“As much as the criminal justice system does not want to damage a community, it can. Because when people go to jail, it can damage their lives,” Ray said. “… In some cases, we may have inadvertently harmed our community by creating a future of more crime.”

Ray said the issue makes it clear how important it is that officials are “extremely careful in what we do.”

“It has an impact on your entire community,” he said. “It’s clear you have generations of people who have gone to jail. Do they really need to be there?”

Boyle County Jailer-elect Brian Wofford, who is currently chief deputy jailer, said he believes “some of these women are taking the charge for their boyfriend.”

Cost of a new jail

Projections assembled by Ray show if the jail population were to continue expanding as it has been doing for the last 15 or so years, Boyle and Mercer counties would need more than 700 beds by 2048 to house all their inmates and avoid the risk of a lawsuit on constitutional grounds.

But the study also cautions that projections so many years out are unpredictable and often wrong. Ray restated those words of caution Thursday night, explaining that it’s better to look 2-5 years out, rather than 30. His forecasts of 700+ beds are “nuts.”

“You’d have the highest incarceration rate on the planet,” he said. “So forecasts aren’t practical and don’t always make sense. … what you need is about 450, 480 (beds) … something like that.”

The study formally recommends a 450-bed jail with a ballpark cost of almost $34 million. It prefers a new jail over an alternative recommendation of gutting, renovating and expanding the current jail, which would have an estimated total cost of almost $36 million, after factoring in added costs such as relocating inmates and providing temporary shelter, food and health care.

The study also offers a recommendation for a three-phase treatment center. The initial “detox” phase facility would cost an estimated $2.4 million; a secondary facility for a 30-day drug treatment program would be another $2.4 million; and a third facility that would provide training and life skills would cost $2.3 million, Chamber said.

The study states the 450-bed facility would be adequate for Boyle and Mercer’s needs if the changes to the local criminal justice system recommended in the study are implemented.

At one point during the forum, Wofford and Caywood asked what would happen if there were no changes in the system.

Ray responded that the jail would return to dangerous levels of overcrowding more quickly and be exposed to liability once again.

Lawsuits filed against jails can be “nasty” but they’re also effective in bringing about positive changes, Ray said. But under a lawsuit, a federal judge is often telling local officials what they must do — “you lose control of your destiny” and “it will cost you more than it would otherwise cost you if you just came together as a community” to “do it right.”

“Can you tell me how you do that when the judicial system doesn’t show up at the table?” Caywood asked, referencing the fact Peckler has declined to participate in the study or the Criminal Justice Coordinating Council and prohibited other judges from participation as well.

“In my experience, a federal judge has a little more authority than a local judge,” Ray said.

No, you don’t, Ray agreed. “You want this to be home-grown, collaborative.”

Near the end of the forum, Caywood brought the subject up again. He pointed out a portion of the study that calls for local officials to get commitments from criminal justice system officials on how they will change policies going forward in order to accurately plan for the right-sized jail.

“If we don’t have these folks sitting at the table, to me, it’s very difficult to make informed decisions and move forward,” Caywood said.

Ray agreed. “Unfortunately, you’ve got to resolve any jail problems, notwithstanding any barriers created by them.”