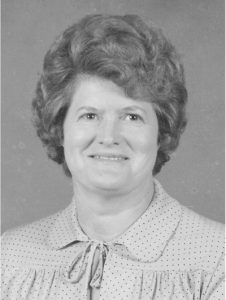 Louise Eva Coffman, 84, passed away Friday, November 30, 2018. She was born April 27, 1934 in Rugby, Tennessee, a daughter of the late Obert and Maxine Bertrum Coffman. She was the loving wife of 48 years to Kenneth Coffman.

Louise was a member of Mitchellsburg Church of God and she was a nurse for many years. She enjoyed taking care of her grandkids as well as going camping.

Those surviving in addition to her husband, Kenneth include a daughter, Evelyn (Rev. Larry) Moore as well as her grandchildren Little Larry Moore, Robin Shafer, Derek Moore, Chrissy Julian, David Moore and Sherry Coffman. She is also survived by 19 great grandchildren; and seven great-great grandchildren.

She was preceded in death by her son, Robert Coffman; sister, Artie May Lagnese; brother, Elmer Coffman; as well as her grandson, Eric Moore.

The funeral service will be 2:00 p.m., Thursday, December 6, 2018 at Walden Funeral Home Perryville. Burial will follow in Parksville Cemetery. Visitation will be Wednesday December 5, 2018 from 5-8 p.m. at the funeral home.

Memorial contributions are suggested to the American Cancer Association