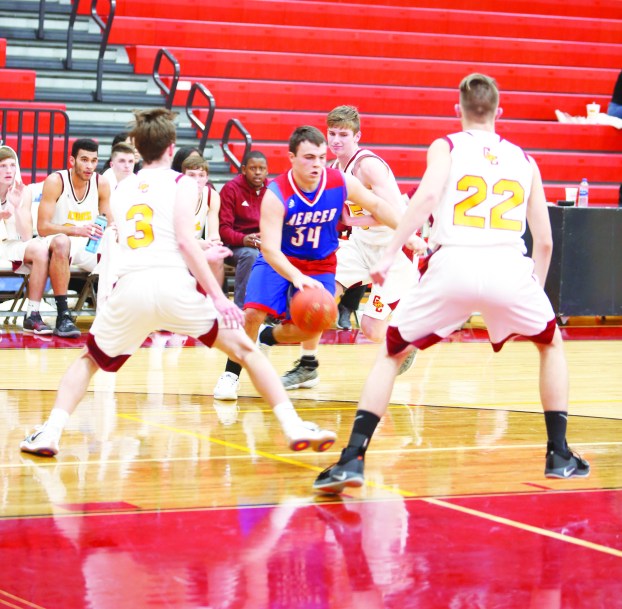 LANCASTER — Mercer County really needed this one. Garrard County could have used it, too.

A greener Mercer team had to scratch and claw for its first victory of the young season, rallying late in regulation after trailing for most of the night and pushing past Garrard County in overtime for an 80-78 win.

Jamisen Lewis scored a career-high 34 points to lead the Titans, who lost both games on a weekend trip to southeastern Kentucky, one of them in overtime. 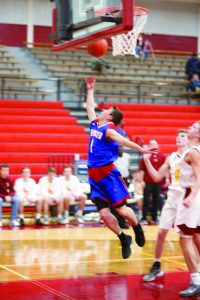 Photo by Mike Marsee
Jamisen Lewis (1) of Mercer County gets past two Garrard County defenders for a layup during the second quarter Monday. Lewis scored a career-high 34 points in the Titans’ overtime win.

Not so for Garrard, which was trying to string together consecutive wins in close games after a lopsided loss in its season opener. The Golden Lions have lost more close games than they have win in recent seasons, and they saw this one slip away despite leading by eight points with 2 1/2 minutes left in regulation.

“We’re up eight with two minutes to go, we’ve got to execute, we’ve got to finish that deal,” Garrard coach Ryan Young said. “But what hurts us some as a program is we’ve got to backtrack on the fundamental things these kids have lost that we haven’t had a lot of time yet to practice late-game situations. So this game is only going to help us, but it rips my heart out. This is probably six or seven games since I’ve been here that we’ve lost like this.”

Mercer outscored Garrard 20-3 over the final 2:14 of the fourth quarter and the first 2:49 of overtime despite missing six straight free throws late in regulation and committing five turnovers in the four-minute overtime.

The Titans have been in the 12th Region finals in each of the last three years, but this is a different Mercer team. Three key players from last season – including Mr. Basketball Trevon Faulkner – have graduated, and one key returnee, forward Kaelin Drakeford, is out with an injury.

Coach Josh Hamlin said he and his staff realized after their season-opening loss to Sheldon Clark that seven players used in that game saw their first varsity action. The Titans bounced back the next day to take 14th Region power Knott County Central to overtime before yielding, and Hamlin said they took an even bigger step forward Monday.

“Our kids didn’t fold, and that’s encouraging,” Hamlin said. “The guys tonight just grew up. There’s four minutes left in the game, and they come to the bench (for a timeout) saying, ‘We’ve got it. We’re good.’ It’s just a great program win.”

The difference might well have been guard play. Lewis and Carter Baughman combined for 62 points for Mercer (1-2), and they hounded Garrard’s ball-handlers to help force 21 turnovers by the Lions, including two critical miscues in the final minute of the fourth quarter and two more in overtime.

“I think we’ve got one of the best backcourts in the region,” Hamlin said. “Those two guys are exceptional offensive guys, really good defensive guys. I’m really proud of those two, because we’re putting a lot on them right now … and they’ve shouldered the load through the first three games.”

Lewis scored 18 points in the first half on 7-of-11 shooting from the field, while Baughman spent most of the first two periods on the bench after drawing three fouls and was scoreless at halftime.

Baughman sparked the Titans in the third quarter, scoring 12 of their 18 points. His fall-away 3-pointer in the closing seconds of that period erased the lead Garrard had held from the start, tying the game at 47-all.

They combined to score all 14 of their team’s points in overtime, with each going 6 for 6 at the free-throw line.

Lewis scored the Titans’ only basket of the extra period, getting to the basket for a layup nine seconds in to break a 66-all tie. He and Baughman combined to hit eight of eight free throws and force two turnovers to help Mercer extend its lead to 76-67 with 1:11 to play, and each of them hit two more free throws to seal the win after Garrard rallied to within three points.

“Everybody on this team chipped in where they needed to chip in, and we played solid and we got the win, which is most important,” Lewis said.

Lewis said he thinks his career high prior to this game was about 16 points.

“Nothing ever like this,” he said. “It felt really great.” 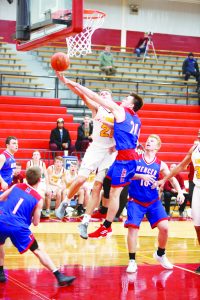 Photo by Mike Marsee
Trey Price (20) of Mercer County grabs the arm of Garrard County’s Braden Sebastian as he tries to stop a shot during the fourth quarter Monday.

Hamlin said he had a talk with Lewis last week about putting too much pressure on himself, encouraging the senior to lower his expectations and simply be the best player he can be.

“He’s exceeded my expectations,” Hamlin said. “He went through some stuff last year with some ankle injuries, but he’s shown the region what he can do.”

Garrard scored the game’s first seven points and led 10-3 before Lewis got two layups off Lions turnovers to stop the bleeding. The Lions by as many as nine in the first half, when Braden Sebastian scored 16 of his team-high 25 points, but Lewis scored 12 points in the second quarter to keep Mercer within striking distance.

Baughman scored Mercer’s first eight points in the second half. He hit three 3-point shots in the third quarter and was 5 for 7 overall from 3-point range.

The Titans led for a couple of minutes early in the fourth quarter, but Brice Burkhart hit three straight 3s for Garrard to give the Lions a 58-51 lead with 4:04 to play.

Burkhart’s layup in transition made it 64-56 with 2:31 left, but that was the Lions’ last basket of regulation.

Mercer was missing free throws but making hay on the offensive glass. Jamason Sherrow had two big offensive rebounds, one leading to a Baughman 3 and the other to two free throws by Sherrow that made it a one-point game with 1:18 to go.

“We block out on free throws at the end of regulation and we win tonight,” Young said.

Garrard’s Brock Milburn hit two free throws at 1:11 to put his team up 66-63, but Baughman responded with one more 3 to tie the game. The Lions turned the ball over twice in the final minute of regulation, the Titans gave it up once and neither team was able to score again.

“We called timeout to set up our delay and we don’t execute it. … We’ve got to get that last shot,” Young said. “We still struggle sometimes when the game gets flustered and the fans are yelling and people are complaining about the whistles and things like that, and we don’t lock in.”

Burkhart hit five 3-point shots, and he and Charles Jones scored 17 points each for Garrard. Sebastian had a game-high 11 rebounds for the Lions, and Jones had eight. 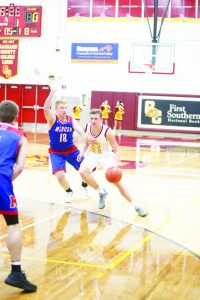 Mike Yance talks about getting out, but he isn’t likely to leave the sideline any time soon. Another basketball season... read more