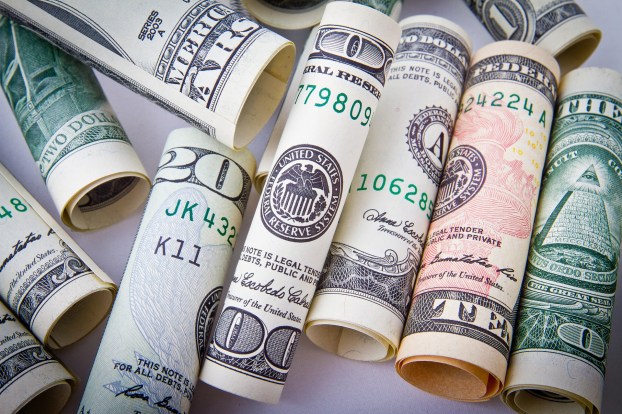 Matt Callahan with Perfection Group presented Boyle Fiscal Court with a $5,000 contribution to the Constitution Square Park endowment fund last week. Callahan said the group provides donations to organizations “we feel worth putting money into.” Callahan and a coworker at Perfection both went to Centre College, he said.

The endowment fund is used for future programming and upgrades to the park where Kentucky’s original Constitution was drafted.

“We thought it would be a good opportunity to put some money in this, from our love of this area, and it’s such a worthwhile fund,” Callahan said. In 2016, Perfection was recognized by the Kentucky chapter of the American Works Association for a “successful performance savings contract” with the fiscal court. Ten awards were given throughout the state for projects completed, and Perfection was chosen in the environmental category for work done at the Boyle courthouse and jail, focusing on HVAC replacement, water conservation and generator installation.

“You all have done terrific work here, and we’ve not ever had one complaint about you all interrupting anything” in the course of doing project work, Judge-Executive Harold McKinney said. “Thank you all for that, and thank you for this contribution. It will help people for many years to come.”

In other business during the fiscal court meeting:

• A local non-profit gave an update that it has given more than 2,000 pairs of new shoes and socks to students throughout Boyle since it began.

“This year, we gave 426 new shoes and socks to children in public elementary schools in Danville, Boyle County …” and for Head Start programs, as well as Kentucky School for the Deaf, said Susan Neale with Happy Feet=Learning Feet.

The program was started in Union County in 2009, and since has expanded into several others, including Boyle.

The program was developed to help remove one of the stumbling blocks to optimum school performance, based on its website. It hopes to make students happy, thus becoming better learners. It works to provide a new pair of shoes to every student in need, as identified through Family Resource Youth Service Center coordinators at each of the schools.

It is funded by donations and fundraisers.

“Kind of hard to believe. And we’re going big guns this year. So far, it’s been the biggest year we’ve had,” she said, referring to the most ever people they’ve had audition for a play. “Annie Jr.,” which is up through Sunday, brought almost 100 kids in to audition — a record high for the theater.

“It was a record. Not only do you help us financially, but I see many of your faces every year as patrons,” Logue told the court. She said next to the Pioneer Playhouse, WTH is the “oldest arts organization in Danville/Boyle County.” She said 160 kids took advantage of this past summer’s two weeks of acting camp, held with partners from Carrickfergus the theater met through the Sister City Commission’s cultural exchange.

“You’ve been a great help. This is the last time I’ll be coming in front of many of you. I have a little bit of experience, from a long, long time ago, about what it’s like to serve this way, and I appreciate it,” Logue said, whose background also includes a stint as mayor of Junction City.

The second weekend of “Annie Jr.” is also close to being sold out.

• The court unanimously approved the purchase of a heated air curtain for the Fourth Street entrance of the courthouse. Three bids were received, but the court went with Keystone Industrial for $6,842. The work includes running a new electrical circuit from the breaker panel, located in the sheriff’s office, down the hallway to where the curtain will be installed.

County Egineer Duane Campbell said the draft circulates down the hall when the doors are open.

“Also, we have people who are bunched in down here, on Tuesdays and Wednesdays for court, so it’s also for the public,” McKinney said.

• An emergency purchase of a tilt skillet for the jail was approved, totalling $17,515. Chief Deputy Jailer Brian Wofford said the jail’s current skillet “went down,” and that it is a used model. “It’s the workhorse of the kitchen — we make three meals a day, 365 days a year with it. We’ve been repairing it over the past couple of years, but it can no longer be fixed.”

Wofford said the bid, through Foodservice Equipment and Smallwares in Louisville, was the best make and model for the money, as it’s specifically made for jails and penitentiaries and should last up to 15 years.

• John Wesley was hired as deputy director of Emergency Medical Services, making $58,000 annually. Wesley has a been a captain and a paramedic with EMS for years. He will be supervising all of the operational functions over the ambulance service.

With a massive $75,000 study of the jail and criminal justice system in Boyle and Mercer counties complete, it’s time... read more