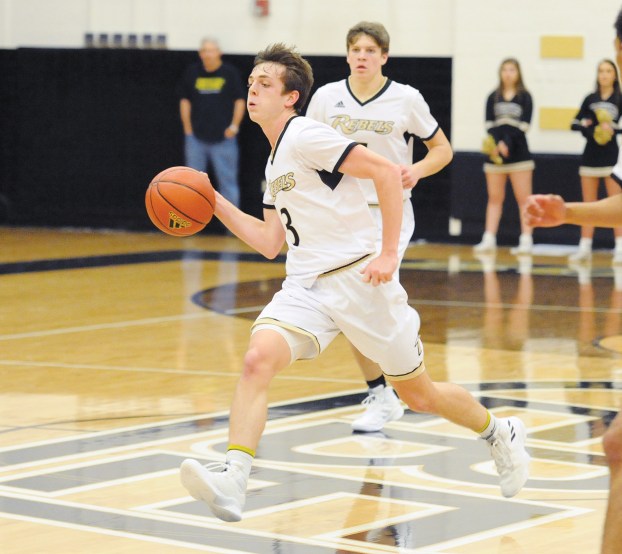 This year will also be the first year without any players from that roster four years ago. It’s a new era, and current seniors — Caleb Jackson, Will Imfeld, Jacob Lassiter and Cameron Britton — embark on a new journey with a young team.

Head coach Steve Adams said he liked what he saw from his senior class in the game Tuesday, particularly down the stretch.

“The freshmen class is a nice class but we’ve got to have balance,” Adams said. “I think our seniors did a nice job keeping us focused and keeping us together. None of them, other than Caleb and Jacob, they don’t have a lot of experience, especially now being in the main role. But I thought they did a nice job holding things together and making plays when they needed to.”

That’s something that the seniors expect to do more of, particularly early in the season.

“Kind of with that, we don’t want to over-complicate stuff,” Will Imfeld said. “That’s one of those things we’ve got to work on, because once you get out there, I told my little brother, you get out there and you get 10 times stronger. Your shot feels stronger, free throws are different because you’ve got that adrenaline going. It’s just different. So you don’t have to overcomplicate things, just calm down and play and that makes it easier. That’s what the coaches have been trying to get us to do, and when we do that I think we’ll be fine.”

Somerset sped up the game during the second and third quarters against Boyle on Tuesday, mounting a comeback to retake the lead in the fourth quarter. The Briar Jumpers went with a full-court press and forced the Rebels into an uncomfortable offense.

“We threw it away there late a couple times and we struggled with their press,” Adams said. “We’ve worked on our press offense maybe a grand total of 20 minutes. We’ve got so many big, major things we’ve got to work on, that was kind of low on the priority list at this point in time. But we did some nice things, it’s all about spacing and learning.”

Jackson said that’s where trust in teammates will come in handy, and that trust takes time.

“On the press, we’ve just got to trust our teammates and have the floor balanced,” Jackson said.
“Then we can spread the defense out and just take care of the ball with bounce passes. We have a lot of talent with our young freshmen like Luke and Aden. But basically, we need to play together more, learn the varsity flow of the game. They aren’t really used to it. We have some new guys who aren’t really used to reading the flow of the game, so we just have to do that a bit better, then knock down free throws. That’s a big deal.”

Boyle’s performance at the foul line left room for improvement, and the Rebels certainly have other areas to improve. It’ll help later in the season when juniors Grant Hotchkiss and Reese Smith return to the lineup.

But for now, younger players have the chance to prove they are deserving of time. And an inexperienced Boyle team will only improve as the season goes, the seniors said.

“We’re bringing in a lot of talent, a lot of the young guys have talent,” Will Imfeld said. “Right now I think our main problem is that we just haven’t played together a whole lot. We haven’t gelled a whole lot. Today was a good win but it’s far from our best. A lot of us made mistakes but that’s where practice and gelling together, understanding each other’s play will help.”

For the seniors, they’re expecting to lead in any way possible in their final year.

“Senior year, last go around,” Jackson said. “We want to leave everything out there and try and use what we’ve learned to help guide the younger kids so they can get right into it and they don’t make the mistakes that we did. Being leaders on the team, that’s our job.”

“I think leading by example is big, whether that’s scoring, playing defense, just all-out effort, or even just gathering the guys up at the end and telling them to calm down,” Will Imfeld said. “I think that’s really big down the stretch. As we grow closer and closer together as a family and a team, that’ll be important.”

Boyle County’s season is off to a winning start. The Rebels defeated Somerset 61-56 in their home opener Tuesday, the... read more