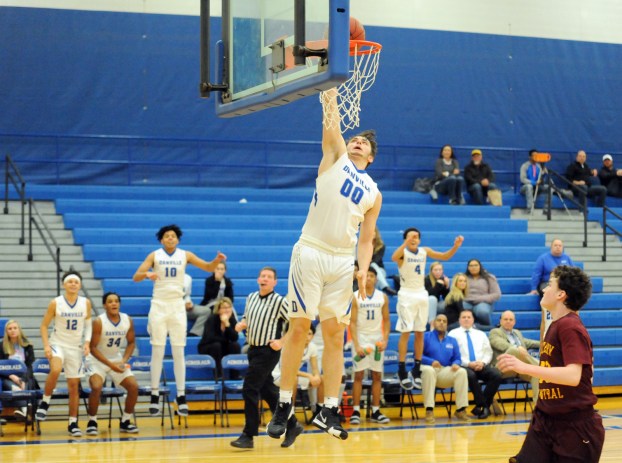 Danville boys basketball is 3-0 for the first time since 2005.

The Admirals put a running clock on McCreary Central (1-3) in a 81-47 victory on Thursday.

Danville has had plenty of good starts to a season in the past 13 years, but this year, Danville’s depth is what has head coach Ed McKinney excited.

“We’ve never had this many guys that have all deserved minutes,” McKinney said. “They see it, too. The good thing about it is, we’re not having to force guys into the game. The guys that are playing, everybody knows that everybody can play. That makes it easier. I told Brennen McGuire, there would be a lot of years that he’d be starting. But like he said, we’re just so deep. There’s a lot of guys on this team that could be starting for a lot of high school teams. I’m never going to have to worry about having too many good players, that’s always a good problem to have.”

Danville had five players in double figures — three off of the bench — and had nine different players score in Thursday’s game. Junior Trey Dawson led all scorers with 16 points.

“This year, we’re not very selfish. We move the ball, everybody’s a good athlete and everybody can score,” Dawson said. “Each nights we’ll have points coming from anyone, it just depends.”

That creates some great practices, McKinney said. There’s so much quality down the bench that what the Admirals see in practice can be just as competitive as a game.

It’s still very early in the season, and both McKinney and Dawson said the Admirals have plenty to improve — particularly on the defensive side on the ball.

“Whoever five we have out there have to be better than the other team,” McKinney said. “But I think we’ve got at least 11 varsity guys that could have their feelings hurt or be mad. But we haven’t seen that yet and I think they see that we have a chance to be pretty good. I didn’t think we were good defensively tonight. Sometimes you win because you’re just a little better. I thought (McCreary Central) did some good things.”

“Like coach says, we need to be more intense on defense,” Dawson said. “There’s many times where we relax on defense and they get past us or throw over our heads, things like that. We need to crack down on that because there’s going to be teams that will convert points off of that.”

For the players, Dawson said this year feels different because so many players have played together for 10-plus years.

“I think we have more invested into it, I know a lot of these guys have been playing together since they were five, six years old,” he said. “We just want to see each other win, see each other succeed.”