Danville man wrote home from Britain during World War I

A.W. Timoney, who was associated with the Danville and Harrodsburg newspapers in the early 1900s, wrote letters to his family while serving in the military during World War I.

He volunteered to the Naval Aviation Force in January 1918 and trained in February at the Great Lakes Naval Training School in Illinois. He served in France and Britain.

Timoney wrote an entertaining letter in November 1918 from a station in England.

“Dear Old Blighty, so say the English, as they disembarked from the ship bringing them home from the front.

“The militant hunn, bruised and battered by over four years of war, living under the most despotic government ever conceived by the mind of man looks upon the rapidly disintegrating ruins of his Vaterland and calls the remains home.

“Even the Eskimo loves his snow but his heart swells with patriotic fervor when he gets home from a round of traps. 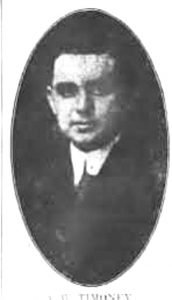 “So throughout the ages from the tribal races to the most complex civilizations it has been characteristic of every people to love their own country.

“How pardonable is it then for one nurtured ‘mid the waving fields of blue grass, the fairest land the sun ever shown upon (and where it is also admitted the moonshine is the strongest), to allow his thoughts to wander from his surroundings in England back to Old Kentucky and more especially that part called ‘Little Britain.’

“Should a visitor from Danville make rounds of nearby Eastleigh, or for that matter any theatre in the war zone, he would find many familiar faces.

“He would be welcomed by Charles Anderson, James Cooper, Thad McDonnell, Ed Diddle and James Coleman, who lived in Danville most of their lives, and Donald Edwards of Harrodsburg, that prosperous little suburb of Danville, located just beyond Jerry Caldwell’s farm. Nor would he have to go very far out of his way to see the Joplin Boys, Bruce Montgomery, Walter Bruce and others.”

Timoney said censorship regulations prohibit giving detail of the war. He said Anderson, Edwards, Lester, Diddle and McDonnell are in the flight department; Cooper, Timoney and Coleman read outgoing letters with a safety razor, while others were in a hospital unit.

“While no environments could be found on the face of the globe equaling those these boys have been accustomed to, they are as happy and contented a bunch as one could wish to find.”

Timoney said the camp was as near a “home” as one could find in the Navy. The work was hard, but pleasant and agreeable.

“The accommodations do not equal those of Hotel Gilcher, but they are of high order.

“There is a canteen on the station with Woolworth prices. Liberty from 6 to 11 p.m. Every other night or London liberty once a month. Eastleigh and Southampton are on the liberty list.

“The battle rages nightly with scarcely less violence than Metz. They get the latest news and weather, but no sports.”

It rained every day.

“All the umbrella peddlers in the world should head for England. A truck is a lorry, a grocery store is a shop, a barber shop is a shaving saloon, a movie is a picture place and a street car a tram, and tea, pronounced like the E is freight, is the drink of the nation.

“The English are agreeable and polite and as nice as their dispositions allow. They are by no means as demonstrable as the French.

“Ice cream is a pre-war luxury. An egg and an apple cost a shilling each, the beer is rotten, the booze out of sight, a steak as much as a Ford car, and all food is extremely high.

“The mountainous developments in Germany and Europe make it apparent to all that America and her Allies have won a complete victory. Hostilities will have ceased here as this reaches you with only the final imposition of the terms and the harvest of the fruits of victory for future determination.”

It was noted in The Advocate that Timoney and friends Charles Anderson and Hobert Lester arrived in Danville in December 1918 to spend Christmas with their families.

They had been in England and had landed in New York a few days earlier and granted furloughs.

Timoney was a Quartermaster 2nd Class. He mustered out of service Jan. 29, 1919, after a year of service. He lived in New York and Louisville.

Timoney turned down a position with the Patent Office in Washington, D.C., saying he “liked Kentucky better.”

He worked with the Internal Revenue Service. He was a Centre College graduate and had lived in Danville prior to the war.

Born Jan. 19, 1890, in Kentucky, he died May 14,1961, in Louisville. He is buried in Bellevue Cemetery where his parents, Frank and Margarite Fox Timoney are also laid to rest.

Frank, a native of Ireland, lived in Danville 38 years where he served as Boyle County jailer and reared his children, Francis, Anne, Alice, Mary and Arthur.

100 YEARS AGO — 1918 In order that each Kentucky county shall have a complete record of the part the... read more