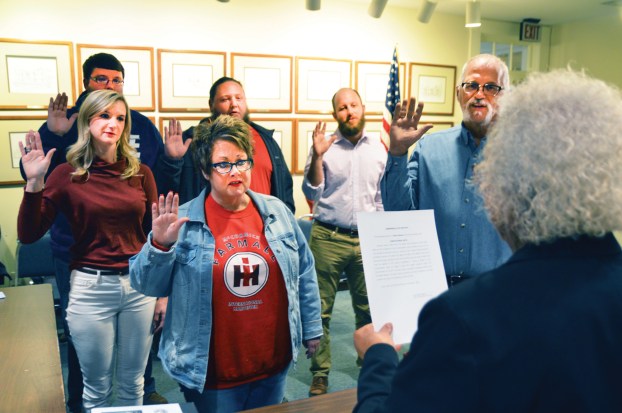 PERRYVILLE — A city council member got shot down Thursday night in Perryville when she attempted to ask questions about why Tasers were needed by the police department.

The Perryville Lion’s Club is planning to give the city the money — more than $1,500 — to purchase two Tasers for the police force.

He said after talking to Chief Hatter, it was recommended — if council approved — that the club would pay for two Taser X26Cs, at a cost of $777 a piece. “If that’s what you all think you need, the Lion’s Club is willing to provide the money for that, if you approve the purchase,” Campbell said.

Mayor Anne Sleet said the city appreciates it very much, and she knows “Larry, and Parker — who is at training in Richmond — will be excited about that.”

When Campbell asked about how to go forward with the purchase, Nunes wasn’t certain.

“I don’t know how it’s set up. I know there’s some online training that goes with it, with the Taser itself,” Nunes said.

Council member Julie Clay asked Nunes to share some examples of when “you might need to use that,” to which someone suggested “at the council meeting,” causing many to laugh.

Clay asked Nunes again to give an example; again, someone joked “at a council meeting.”

“I’m asking him,” Clay said making it clear she didn’t think the joke was funny. 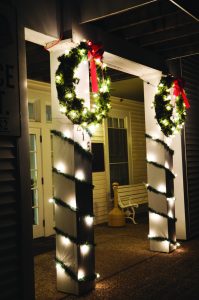 Perryville Community Center is all decked out for the holidays.

“I’m asking for specific examples,” Clay responded. “When do you see you all using that?”

“If someone is resisting … (we) have a choice of using a baton or Taser to get them into custody,” Nunes said.

“Do you see it being used often?” Clay asked.

Clay told Nunes there was no reason to be defensive, she was just asking about the situations Tasers could be used in.

“No, I’m not (being defensive), I’m just telling you …” Nunes started, but council member and Mayor-elect Brian Caldwell interjected and said he’d make the motion that the council accepted the offer to purchase the two tasers. Mayor Sleet called the vote, to which four voted in favor and Clay was silent.

After the meeting, Clay said she didn’t fully understand what had transpired over the Tasers.

“I think it’s important for the taxpayers and the citizens to know what the use of force continuum is,” Clay said, referring to standards that provide law enforcement officers and civilians with guidelines as to how much force may be used against a resisting subject in different situations.

Clay said if the conversation had not been interrupted, she would have asked Officer Nunes to describe the use of deadly force inside the City of Perryville.

“That’s a valid thing I think all of us need to know. And I don’t know why he (Nunes) got so defensive. Public policy is public policy, not cowboy policy,” Clay said. “And I’ve never opposed anything that they’ve ever wanted, if it’s justified. They’ve never had one before now.”

Nunes was hired as part-time officer in July, amidst some controversy. Some council members were upset about the hire due to the position not being budgeted for, and two members walked out of a previous meeting over the issue. Nunes makes $10 and hour, and was brought on to work about 25 hours a week, during nights when Chief Hatter is off.

Some were also questioning the move of bringing him back, since he resigned from the same position in 2014. It was said he left due to scheduling dispute with the mayor, but Nunes wrote The Advocate-Messenger and said this was not the case; he had moved out of state.

Clay said if she would’ve been permitted to continue the dialogue, she would’ve asked about a facilities plan or police plan. “Is there a plan for equipment they need or need replacing? The city is supposed to have a comprehensive plan, and as far as I know, we’ve never had one. That would’ve been the correct way to find out what the department needed.”

Clay added, “The fire department clearly articulates their needs; (Fire Chief) Anthony (Young) has a plan. The police department, on the other hand, does not.”

• Danville-Boyle County Planning & Zoning Director Steve Hunter appeared before the council, asking for a ratification on the comprehensive plan’s goals and objectives.

“We have a countywide comprehensive plan that was adopted in March of 2017,” Hunter said, referring the council to the page in the book with dates on it. “Those are the dates of adoption, and they’re relevant because state law says once every five years, the planning commission has to reaffirm or reevaluate their goals and objectives.”

Hunter said this part of the plan doesn’t get used very often, but they’re the lead-in to the actions. P&Z made some minor tweaks during its Nov. 7 meeting, he said, with one being to accommodate the possibility of Junction City coming back in, as well as some housekeeping references to the new landuse map. The City of Danville and Boyle Fiscal Court have all approved it.

“You all just need to adopt the changes, they’re outlined in red. It references the future landuse map, and the big objectives at the end … They’re a little fluffy in nature, maybe a little utopian, reaching for the stars type of stuff, but they set the framework of our 20-year comprehensive plan, and our goal to keep the county moving forward.”

Hunter said something he found interesting about the dates in the front of the book was that it appears the comprehensive plan was started on in 2012. “And they came out to all of you guys and got these goals and objectives passed, and then it took them five years to get the plan done. Which is very rare; you would think it’d gotten done in a year or two. That’s why these dates have lagged behind us. You’d have thought what would have happened in 2017, is when they got the whole plan together, they might have just brought those back out to you then.”

• Outgoing Mayor Sleet delivered a moving prayer before the city council meeting commenced, which she acknowledged she’s not perfect and has made mistakes in her tenure, but that she appreciated every person in Perryville and has always attempted to do right by them. She said she hoped the new members will be appreciative to the people who put them in office.

• Council member Paul Webb asked City Attorney Winfield Frankel if there “was any update about what we discussed during the last meeting,” referring to what will only be described as an ongoing investigation into missing property tax money. Frankel said he could send an update to each member, or they could go into executive session due to impending litigation, which they did. Sleet said they took no action.

• Resident Rob Kernodle thanked Sleet and the rest of the council for their years of service. He also served on city council, he said, and knows what a tough job it can be. He said as Sleet said during her prayer, no one is perfect, but he had interacted with everyone around the table and thought they all had the best interest of Perryville at heart, and thanked Sleet for her many years of service.

• Resident Steven Walker, who has been a vehement opponent of Walden Funeral Home’s plan to build a crematory next to its funeral home in town, asked Mayor Sleet if she had received a letter from the law firm representing him. “No, I have not,” she answered. No other discussion was held.

• Vicki Goode with Main Street said they’ve received several recent inquiries for available properties in Perryville for new businesses. “The sad news is we don’t have any empty buildings that are for rent, we’ve got several for sale.”

• City Attorney Frankel asked the council to review the deed information for a lot behind the Johnson-Britton House. He said it was something he, Mayor Sleet and Judge-Executive Harold McKinney had been working on, and the county wanted to donate it to Perryville.

If the Boyle Fiscal Court votes to gift it to the city, Frankel said, the council needed to approve its receipt. Clay made the motion, and the council unanimously voted in favor of accepting it, if made as a gift.

• Officer Nunes gave the police report in Hatter’s absence. “I can tell you what I know. I know we’ve done six narcotics investigations, 17 citations, and about 40 courtesy traffic stops for headlights and taillights out.”

• Fire Chief Anthony Young said November was another busy month. “Through Dec. 2, we’re at 66 runs for the year … “ He said an application and fee has been submitted through the state for an alcohol license, and three grants have been submitted in the last month for FD funds.

State aid check should come in for $1,400 reimbursement for White House fire for consumables.

Issues were also discussed with the fire department building, with some repairs being done. “It’s an older building, we need to take a look at that, as well.”

Young said there are some grants through Rural Development he plans to apply for. “That’s m y next big project. It’s probably a challenging grant process, not one I’ve tackled before, but we’re going to look at it and see what we can do.”