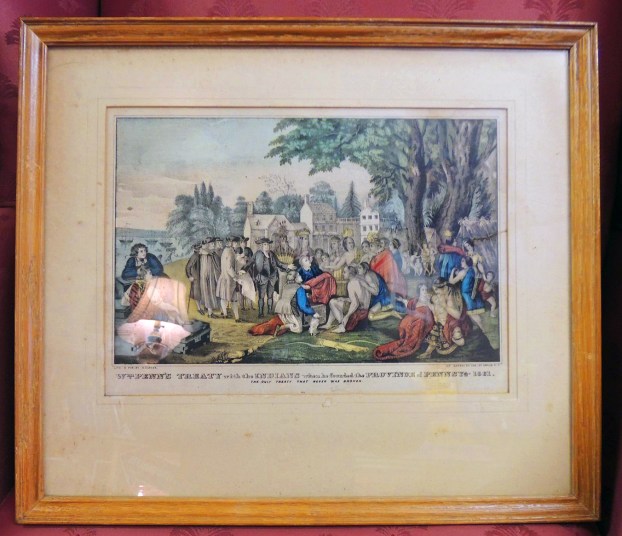 Mid-19th century lithograph was made by famous publisher Nathaniel Currier

Question: Hi Jerry. What can you tell me about this print? I bought it years ago and always thought it was funny that it only said Currier and not Currier and Ives. It’s in good condition and the colors are bright. Has the market changed that much that early prints are worth much? Thanks for taking time out of your schedule to look at this.

Answer: What a great piece and I love early prints and engravings. What can I say? These two guys have made their way into the American lexicon, described by themselves as, “Publishers of Cheap and Popular Prints.” Nathaniel Currier was born in Roxbury, Massachusetts, in 1813. He was the second of four children. His family was humble and lived a very tenuous life. When his father passed away unexpectedly, Nathaniel was eight years old and the family was sent into a tailspin. At this time, Nathaniel Currier began working a series of small jobs to help support the family.

However, fortune shone upon him. At the age of 15, he apprenticed in the Boston lithography shop of William and John Pendleton, beginning the start of his professional career. A few years later he moved to Philadelphia to work for M. E. D. Brown, a noted engraver. His earliest works were signed Stodard & Currier, the result of a partnership he created in 1835. The partnership was dissolved because of poor economic returns. He set up a shop alone, working as N. Currier. He operated alone until 1856.

A lot of his early business was from the printing of fires and disaster scenes. Then as today, people were thrilled over tragedy. In 1857 he and James Ives joined together and formed a partnership that lasted over 72 years and produced at least, 7,500 lithographs. I simply can’t have the space to describe this groundbreaking, interesting and successful business venture; or explain the difference between prints, engravings and lithographs. My editors would skin me. But do some research yourself if you want the long, full story. There are numerous publications out there. Check at your local library for starters.

On to your piece. You have what’s titled, “Wm. Penn’s Treaty with the Indians when he founded the province of Pennsa. 1681: The only treaty never broken.” Whew! That’s one long title. It dates to 1845.

It was not an overly popular lithograph but it’s not considered rare. It’s based upon the Benjamin West painting showing the treaty made at the village of Shackamoxon on the Delaware River.

It’s hard to tell from photos but the size looks right. The image should measure roughly 9” x 13”. The condition of yours looks to be only good. It has signs of soiling, foxing (that’s those brown bloomish-type spots), but it is fresh and brightly colored. I found only a few listings from the auction world.

One was more appropriate and in similar condition and it sold for $225 in 2014. In the retail or

gallery world, I found this same print, priced for upwards of $1,200, in spectacular condition with

Now, something that we simply have to address with old prints that were framed from the 1950s to the 1970s is that many times early prints were “laid”, meaning that the print or engraving was glued to a backer board. If this is the case, then your lithograph is worth considerably less. It’s horribly expensive to have this glue removed. Take it to a reputable framer to investigate. I recommend that even if it is laid, leave it as is and invest in a good acid free matte and archival glass. Thanks for sharing it with us.

From our files, Dec 8

100 YEARS AGO — 1918 School began at the Junction City High School Monday after being closed due to the... read more