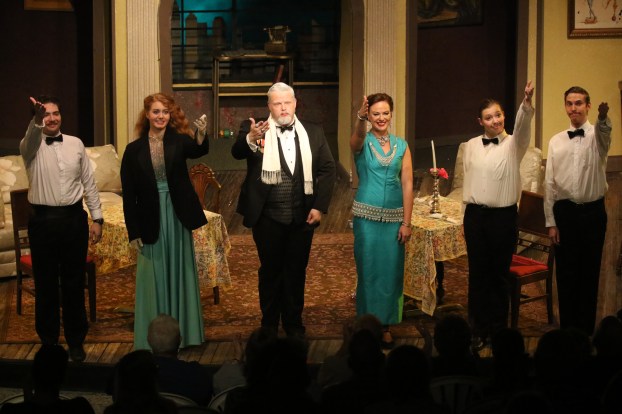 Pioneer Playhouse just announced its 70th season under the stars, which begins in June, and in celebration is offering holiday savings on all Patron and Super Passes bought before Jan. 1.

“We can’t believe we’re turning 70 next summer!” says managing director, Heather Henson, daughter of founder, Col. Eben C. Henson.  “It’s a big anniversary so we took our time choosing plays, and we think there’s something for everyone in this line-up.”

First up a zany comedy set in the 1930s that plays hilarious homage to the original “King Kong” movie.  Henson says the play is fairly new, written by Jack Neary, an actor who’s been in serious movies like “The Town and Black Mass,” but who’s written a truly funny play —   one that made the Hensons laugh out loud.

“That’s the way it works,” Henson says.  “My brother (artistic director Robby Henson), my mom (producer Charlotte Henson) and I read lots of plays during September and October, then narrow it down to a few stand-outs, which in turn get whittled down to a five-play season. Overall we agree on play choices, though sometimes there’s a bit of a tug of war over one play or another.” 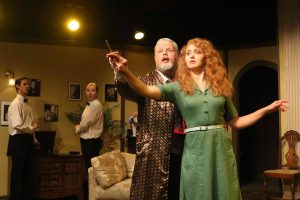 The second play was “a no-brainer,” according to Henson.  Written by Jeffrey Hatcher, “Sherlock” is a smart, funny mystery featuring everyone’s favorite deerstalker cap-wearing sleuth.  “We didn’t do a ‘Sherlock Holmes’ last year, but they’re always so popular.  This one is set in America for a change, and it’s really fun and clever.”

The third slot of the summer, as usual, goes to a brand new “Kentucky Voices” play, part of the series of original plays Kentucky’s oldest outdoor theatre has been producing for over a decade. Written by Robby Henson, who is artistic director and an award-winning filmmaker as well as a Kentucky Voices playwright.

Robby was inspired by an article from the Lexington Herald-Leader about ‘the Elvis concert that never was’ at Rupp Arena in 1977,” says Henson.  “People stood in line for days for that concert, and then Elvis died and they never got to see him. This is a funny, heart-warming and fictional take on what happened to a few of those people. There’s a hilarious roadtrip from Kentucky to Graceland, where we’ll meet some pretty quirky characters, including more than one Elvis impersonator.”

A play by Ray Cooney and John Chapman will be the fourth show of the summer, and is a classic Playhouse production.  Set in a posh 1960s London fur salon, this timeless farce features lots of mistaken identity and slamming doors.  “Think ‘Boeing Boeing,’” says Henson, referring to a hit from a few years ago.

Finishing out the regular play season, by Ed Howard, Joe Sears and Jaston Williams, the last production will be something others are familiar with.

“Lots of people are familiar with the ‘Tuna’ plays,” says Henson, referring to the series written about a fictional small town in Texas, featuring two actors who play a myriad of screwball “Tuna” residents. “We’ve done two ‘Tuna’s’ before, and they’ve always been huge crowd pleasers.  This one is new for us, and it’s another script that Robby and I found ourselves chuckling over.”

The special stand-up comedy show that always ends the regular season has yet to be decided.  “We have a few different options in the works,” Henson said. “So stay tuned.” She said Pioneer Playhouse did have to raise its prices slightly this year.

“We did not do it lightly because we believe in making theatre accessible to everyone.  But between state budget cuts and rising food and labor costs, we just had to. The good news is, you can save now if you buy Patron’s Passes, which are good for six tickets, or Super Passes, which are good for 10.  Both passes make terrific Christmas gifts for those who love theatre or maybe just like something a little different in their stocking.” 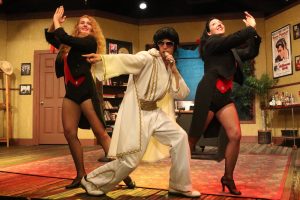 Photos contributed
From the 2017 production of Elvis Has Left the Building, from left to right: Fannie LeMasters, Dalton Graves and Kathleen Thompson.

When Myron, a Broadway producer, learns that his rival is planning something big to steal his opening night thunder, Myron goes to big lengths to find out what it is.  Little does he suspect that the rival show involves a monkey…a very large monkey. A zany new comedy that pays hilarious homage to King Kong.

by Jeffrey Hatcher, based on the novel by Larry Millett

In 1896, the Minnesota Winter Carnival is in full swing, but St. Paul’s wealthiest man has lost his head – literally.  It’s up to Holmes and Watson (on a visit to America) to track a cold-blooded killer from the icy streets of St. Paul to the frozen Mississippi River. A smart, funny mystery.

A “Kentucky Voices” original. Mom’s missing! She’s gone AWOL from her own husband’s funeral, sending her daughter on a wild goose chase from Kentucky to the gates of Graceland, where she encounters a parade of quirky characters, including more than one Elvis. Original comedy inspired by “the Elvis concert that never was” at Lexington’s Rupp Arena in 1977.

by Ray Cooney and John Chapman 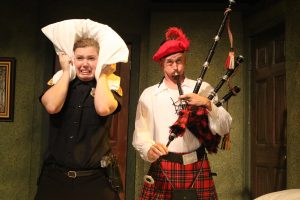 In a posh ‘60’s London fur salon, Crouch is just trying to run an honest business while his charming, yet caddish partner, Bodley, is just trying to give a fur coat to his new mistress.  A stylish comedy full of mistaken identity, slamming doors, and lots of laughs.

Come along to Tuna, Texas, third smallest town in the Lone Star state, for a satirical (and sidesplitting) romp through the hearts and minds of the kooky Tuna townsfolk as they prepare for a great big high school reunion.

Something different: Sammons is sworn into office in unique ceremony

After being elected for the sixth time in 20 years, Boyle County magistrate Phil Sammons wanted “something different” when it... read more