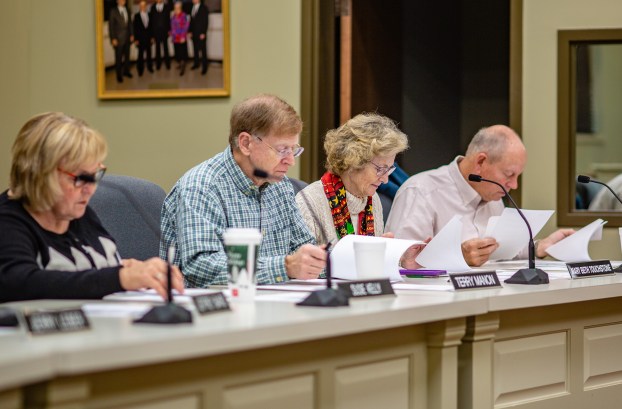 Members of the Danville-Boyle County Planning and Zoning Commission participate in their monthly meeting Wednesday morning. (Photo by Ben Kleppinger)

The Danville-Boyle County Planning and Zoning Commission has finalized a transition from a three-employee office to a two-employee office by approving new job descriptions and promoting Administrative Assistant Lisa Bowman.

The new job descriptions solidify what the director and the “administrative assistant II” positions are responsible for now that the P&Z office no longer has a third employee, P&Z Director Steve Hunter said. Jennie Hollon stepped down to pursue other interests in September and the P&Z Commission decided to hire an accounting firm to handle bookkeeping instead of rehiring the position.

The reduction in staffing improves P&Z’s budget outlook, bringing the agency closer to having a “balanced budget” with its current level of revenue, Hunter said. This year, P&Z will probably spend about $129,000 on personnel; last year it spent about $160,000. This year’s figure also includes about $8,000 Hollon earned before she left, Hunter said.

Things look much different for P&Z now than they did in early 2017, when the Danville and Boyle County governments were told P&Z would need an additional $25,000 in annual funding to hire a fourth person so the office could be open five days a week.

The P&Z office shifted to a four-day work week in the middle of the Great Recession, due to a substantial downturn in the amount of construction activity in the county. When Hunter came on board as the new director in late 2017, he took the office back to five-day service without increasing staff or salaries. Bowman confirmed Wednesday the change to a two-person office will not affect the five-day work week.

The job descriptions approved Wednesday do not affect the number of hours Hunter or Bowman work or the benefits they receive, but Bowman will receive a 5-percent raise along with her promotion, according to information provided by Hunter.

The P&Z Commission also approved job descriptions for two other part-time positions — “administrative assistant I” and code enforcement officer — but those positions are labeled “part-time/seasonal” and are not planned to be filled at this time.

The P&Z Commission also received the final list of its planned regular meetings for 2019 Wednesday. The commission is shifting its regular meetings from the first Wednesday to the fourth Wednesday of every month at 9 a.m., in an effort to receive more up-to-date financial statements.

Bank statements are often not available for the previous month by the first Wednesday, meaning P&Z commissioners are always looking at financial statements from two months prior, Hunter has explained previously.

PERRYVILLE — A city council member got shot down Thursday night in Perryville when she attempted to ask questions about... read more