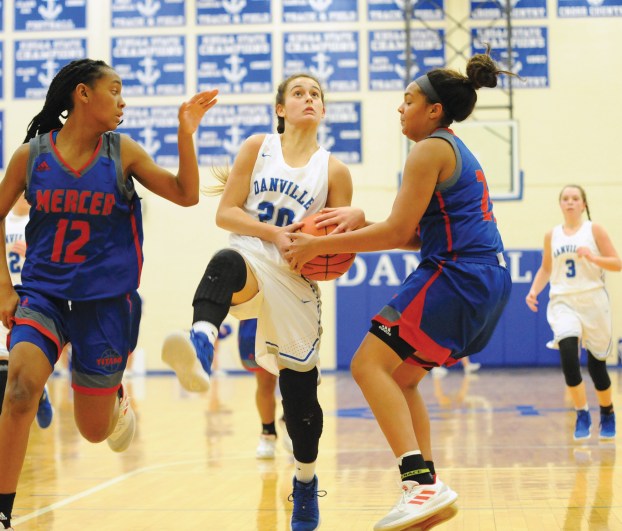 The Admirals hosted Mercer on Monday and fell in a high-scoring contest 93-79, Danville’s first loss of the season.

“That was a fun game for the fans,” Danville head coach Judie Mason said. “We’re trying to change the way we play and (Mercer County) plays that way. They beat us at our own game tonight, basically. We just weren’t on our game. But that’s a good ball club.”

Danville senior Ivy Turner scored a game-high 39 points, her highest total of the season. Mercer County eighth-grader Timberlynn Yeast scored a career-high 36 points for the Titans in the win.

It was an up-tempo game from the start, and the Titans were playing without senior Toni McCombs due to an injury on Saturday.

“I knew it would be like this. I’ve played against Judie Mason, I’ve been around her coaching,” Mercer head coach Hayley Spivey said. “I knew it would be high intensity, fast-paced, chaotic game. We’ve kind of been preparing for that, it was a bit of a change of pace. Toni got hurt at the end of the game on Saturday night, she should be good to go but we kind of wanted to rest her tonight to prevent any other injuries. We had to change our lineup, I’m lucky to have girls that can play that fast-paced game.”

Yeast stepped up, while Channing Lewis added 19 points. Love Mays scored 12 points to round out the Titans’ scorers in double figures.

But Yeast’s night was what has coach Spivey excited.

“It’s just unreal. We’ve been kind of waiting for her to do that because she’s just an athlete,” Spivey said. “She had 36 points and 16 rebounds, I don’t know if you see prolific numbers like that from many eighth graders. But she’s dedicated, she loves the game, she wants to go play at a high level in college and she is preparing for that. I just feel like she kind of took over tonight, I like to see my eighth graders and young girls show no fear. I think that’s what she did tonight.”

From the first eight minutes, the game was played at an incredible pace.

Mason said it was the “shock” of playing against the defending state champions that slowed her team on Monday.

“We just didn’t play well tonight. I think it was the shock of Mercer County, they’ve got to get over that hump,” Mason said of her team. “They’ve been drilled by Mercer for three years. It started out close, then every time we’d come back, we’d give up something stupid. I say it was effort, we didn’t give effort tonight and that bothers me. That’s the only thing I’m concerned about. Not the 15 missed layups, I’m not concerned about that and I don’t yell at them about layups. But I thought we got outworked tonight, and that’s not a Judie Mason team.”

Turner’s 39 paced the Admirals and sophomore Lara Akers was next with 21 points. No other Admiral had double figures.

Mason said that she’d like to build more depth and stamina as teh year progresses.

“I always say fatigue makes cowards out of all of us. I think they got tired, then they started thinking and they weren’t reacting,” Mason said. “I told them, they were more robotic instead of just playing the game. But in their defense, that was the first hard game we’ve played. We’ve blown everybody out.

“They’ve not played at that level and at my speed, and I think they got tired. We don’t have a lot of depth so our practice isn’t that fast. I’ve got to find a way to make that better.”

Danville made a run to end the third quarter but still trailed, 66-55. Mercer was able to keep the Admirals at an arm’s length.

“We played E’town on Saturday, it was a rough and competitive game. But it’s always different when you play someone in the 12th Region, emotions are high and it’s a lot more intense,” Spivey said. “I think this was a good test for our girls to come out here and play a good game, make a statement that we aren’t as far off as people think we are. It was a good test for us.”

Mason said that the Titans proved that they still belong in the conversation at the top of the 12th Region.

“They can say what they want to, but that team will be there competing for the region because they have competed in the state tournament,” Mason said. “Plus they practiced every day against the group that graduated last year.”

For the Admirals, Mason said that they’ll be a different team as the year progresses.

“Ivy didn’t have her best game but she still had 39 points,” Mason said. “What can you say? But she was trying to do too much, and that’s because people were standing. Like I said, we got tired, we were nervous and that makes you stand around. I don’t think we were getting to spots like we were supposed to, and that’s hard to teach on the fly. In a month, that’ll be a different team.”

Danville girls basketball off to hot start in 2018-19 season

Danville’s girls basketball team is off to a roaring start. The Admirals are now 4-0 after a dominant 66-30 victory... read more