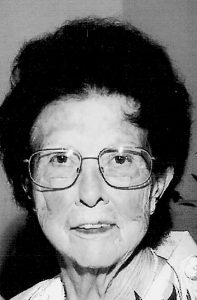 Loretta Lear Peek, age 86, of the Geneva community in Lincoln County, KY, passed away in Stanford, KY on Wednesday, December 5, 2018. Loretta was born on Thursday, July 21, 1932 in Hiatt, KY, and raised in the Brindle Ridge area of Rockcastle County, KY. She was the daughter of the late Givens Terrell Lear and Maggie Lou Sargent Lear.

Loretta was a loving mother and grandmother to her family. She retired from Palm Beach Company in Danville, KY and Somerset, KY, where she started working at the age of 20 and retired with 42 years of service (1952-1994).

Funeral Services for Loretta will be 2:00PM Saturday, December 8, 2018 at Fox & Friend Funeral Home in Stanford, KY. Burial will follow in Oak Hill Cemetery in Rockcastle County, where she will join her parents and siblings on the ridge where she was raised. Loretta’s nephews will serve as Active Pallbearers.

The Visitation will be held 11AM-2PM Saturday at the funeral home. Fox & Friend Funeral Home, Stanford, is entrusted with Loretta’s arrangements. Guest Book at www.friendfuneralhomes.com.