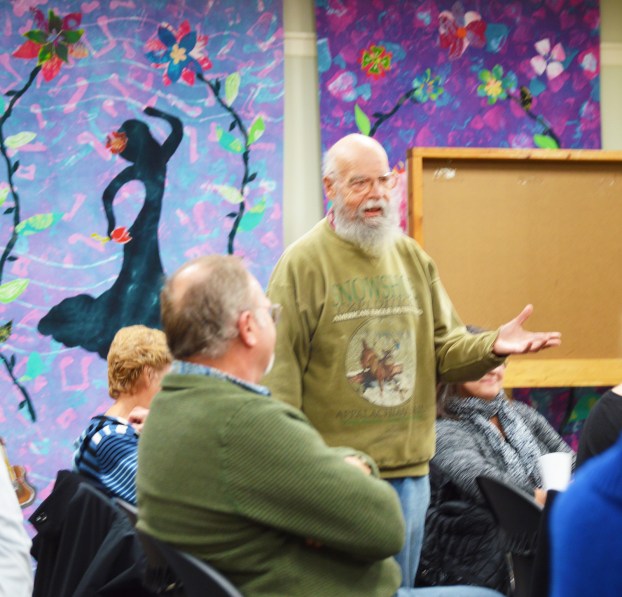 Bobbie Curd/bobbie.curd@amnews.com George Boursaw talks to the "Memories Worth Remembering" group after reading one of his stories in the book, "A Trifecta of Memories."

Paul Stansbury says the idea behind offering a recent writing workshop was simple: Write about a life experience — a memory worth remembering. So in October and November, the group met, shared stories from their past and worked on putting together a book highlighting their work.

Saturday, the group and audience members met at Boyle County Public Library to read and take in the personal pieces that make up “Memories Worth Remembering,” a 63-page compilation of of stories, titled the same name as the workshop. The memories are by Stansbury, Connie Estes Beale, George Boursaw, Sue Davidson, Carolyn Ellis and André Hanekom. 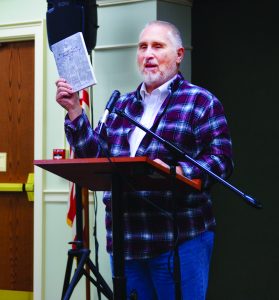 Bobbie Curd
Paul Stansbury, who led the Memories Worth Remembering workshops, introduces participant George Boursaw by talking about his book, “Migrant Times and Other Musings,” which Stansbury helped him publish.

Stansbury says the goal seemed simple — preserving a memory by learning how to write a short recollection, anywhere from 500 to 2,000 words. It sounds easy, but it isn’t, he says. It takes a lot of talent and creativity to share a precious memory in “such a brief space and get the reader to connect,” he says. Not to mention, it takes courage to share a life experience.

When introducing writer Boursaw, Stansbury held up his book, “Migrant Times and Other Musings,” which he helped Boursaw put together. Stansbury says after some pushing, Boursaw finally brought him his journals from the years, and said, “Here you go. Have at it.”

A retired math teacher, Boursaw explained Stansbury is a mentor and friend to him. He never fancied himself a writer, teasingly explaining he considered himself “basically illiterate,” until he figured out how to tap into writing.

Boursaw read “A Trifecta of Memories,” a piece he wrote remembering his first communion.

“My wife and I remain in good health and are intent on creating many more happy memories,” he reads from the beginning of the piece. “However, because I have already spent more than three-quarters of a century on God’s green earth, unless I live to be 150, I have already created more memories than I think I will create in the future. Of course, with that many great memories, it takes a little nudge to retrieve them …”

Stansbury says the recollections contributed to the book are presented as they were written, with as little “editorial interference as possible.” It was important to preserve each individual writer’s vernacular and syntax.

“After all, these were not created as a literary work. Rather, they are the authors’ fond reminiscences shared with you, the reader,” Stansbury writes in the book’s introduction. “As such, they deserve to be presented in their original form.”

Hanekom, who immigrated to the U.S. from the Cape of Good Hope in South Africa, read his piece, “The Holy Week Procession,” describing a trip he and his wife took to Spain. He intricately describes the culture, the food delicacies and sights they experienced, but also how they were targeted by pickpockets twice within the first hour on the streets of Madrid.

After detailing the first attempt, where two girls crashed into his wife from both sides, sandwiching her while one tried to get her backpack, he describes what they felt like after the second attempt.

“The first and second attempted pickpocketing happened in a blink of an eye, not more than 2 seconds I would guess from contact to escape. Twice targeted in the first hour of being on Madrid’s streets? Not the best introduction to a new city. Coincidence? Or what there a message? The next day, she swapped her backpack for a small on-the-belt pouch. Luckily, there were no further pickpocket attempts during our trip …” 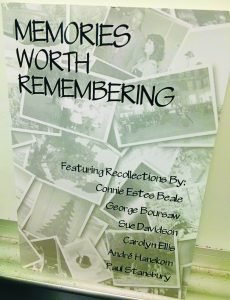 Bobbie Curd
Members of a workshop, led by local writer and publisher Paul Stansbury, compliled short stories after the completion of the series, which was published in a book by the workshop’s name, “Memories Worth Remembering.” Stansbury says he hopes to hold the workshop again in 2019.

Beale read one story about her life growing up in the bayou in Louisiana, and a funny afternoon with friends where one’s mother attempted to serve them lunch. “White Wonder bread sandwiches, neatly cut in half, were piled high on a platter. Starving, we watched as Robert timidly raised a corner of crust to expose the contents. Slices of pineapple and banana, slathered with mayonnaise, filled the insides. None of us could imagine what cookbook had prompted that combination. Neither did we imagine it passing our lips …”

“The Starting Point” is a description about a designing gig she did for someone, detailing the eclectic surroundings of his 17th-floor apartment overlooking Central Park. The imagery created of her phrases pulled listeners in, especially during the end of the piece, which finally reveals who the client was.

“Jim Henson was a unique client and the most creative person I ever worked with. His inspiration was the world at large, no matter how odd or how wonderful. Like his Muppet characters, he could be charming, playful, shy and silly. He was always kind, never negative. I learned a lot from him; the most important was understanding that the true responsibility of a designer is to make the client comfortable in his home … I was honored to have been chosen by Jim to showcase his.”

“The 9th Avenue Ice Station” is a piece by Stansbury, who has written several novels and owns Sheppard Press, which publishes them. The story is about a simple memory he has of getting a 7Up and peanuts with his dad while on vacation in Pensacola. Many in attendance shook their heads at the imagery of his description of dumping peanuts down in his soda.

“I can hardly think of any activity I shared with my father that I enjoyed more. Perhaps because those trips are the earliest recollections I have of spending time with him where neither of us had any expectation other than to quietly enjoy the other’s company.”

Stansbury also leads a group which meets 5:30 p.m. the second Monday of each month at the library, the Danville Writers Group. He says it’s a supportive, non-intimidating space where anyone interested in creative writing can share their work and receive feedback from other writers.

“I’d love to see more people come out and do what these writers have done,” Stansbury told the group after the readings were completed. He hopes to offer the free workshop again in 2019, and that others will take advantage of learning how to document precious memories in the form of a story that will live on forever. “It’s quite empowering.”

“Memories Worth Remembering” will soon be available at the library. It will also be for sale soon at www.lulu.com.

DHS community helps those in need this holiday season

By JAMIE PRICE Danville High School Every year around Christmas, I notice the homeless people on the streets in Lexington... read more