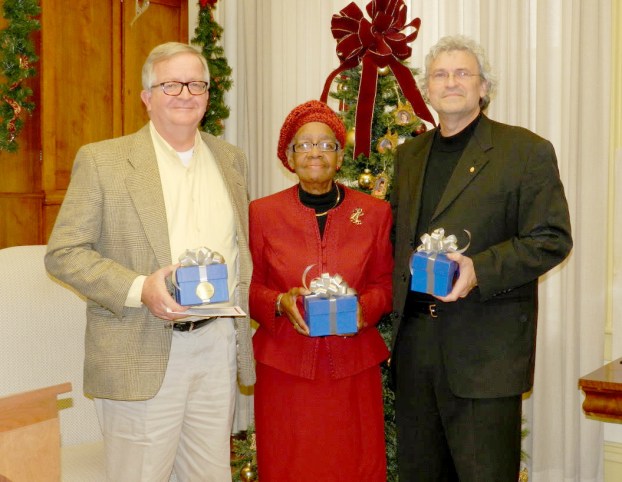 Photo contributed Boyle Landmark Trust recognized Tim Montgomery, Marshetta Clark and Garlan VanHook, shown from left, for their work to preserve historic properties in Danville. The event was held in historic Jacobs Hall on the Kentucky School for the Deaf campus.

Tim Montgomery got the J.T. Noggins award that recognizes a person in the building industry who has exhibited a strong commitment to quality craftsmanship for historic buildings; Marshetta Clark got the Barbara Hulette Award for an individual for their service to the preservation movement or a specific project; and Garlan F. VanHook, an architect of Stanford, received the Cecil Dulin Wallace Award, for his lifetime of service to the preservation movement in Boyle County.

Montgomery, a local businessman was recognized for his efforts in restoring several historic properties, including his residence, the Phillip Yeiser House on Lexington Avenue, and Clay building on West Main Street, which he made into four apartments.

The Goggans award, named by a long-time building contractor, in Danville, recognition is given to a person who has “exhibited a strong commitment to quality craftsmanship for historic buildings,” said George Coomer, a member of the BLT board.

“It is an quite an honor to get this award. I am very honored,” Montgomery said.

Montgomery rebuilt and duplicated original windows on the Clay building, hand-built a stone structure on their farm in Bloomfield, and has been hands-on with all his projects and self-designs and engineers projects.

The Clay building has returned to a viable property with improvement to the city of Danville’s tax roll. It has increased in value and has four occupied apartments and a storefront for a retail business.

The Lokola building on west Main Street, has been stabilized and weatherized with a new roof.

Montgomery also remodeled and restored as his historic family home.

Marshetta Clark received the Barbara Hulette Award in recognition for work she and her husband Howard did to restore their family residence on Fairview Street, and working with the Willis Russell Memorial Log House project, said Barbara Hulette, treasurer of the revolving fund projects.

Clark began work in 1997 and has help raise funds for the Russell log house restoration project.

She said she “did whatever was needed to help out.”

She and others also worked on a project in the Wilderness Road area to restore a house with the help of a grant.

Clark, a former board BLT member, remembers when the Wilderness Road was a proud neighborhood. “People raised their families and felt safe there,” she said in a news article published in The Advocate in 2002.

“Marshetta has continued to give her talents, her time, and her creative spirit to make the events successful for the Boyle Landmark Trust,” said Hulette.

“I have worked with Marshetta over the last eight years and she has truly been our blessed assurance and we honor her today for her lifelong selfless work,” Hulette said.

VanHook, an architect of Stanford was recognized for his lifetime of service to the preservation movement in Boyle County.

He also has worked on new construction projects of traditional design influence with modern construction and serviceability to the community and client.

He also serves on the board of Preservation Kentucky.

VanHook’s Stanford restoration projects include the Blue Bird restaurant, the Presbyterian Meeting House, St. Asaph’s Hotel, judicial center and many strorefronts along two blocks of Main Street; three period houses and the Baughman Mill, circa 1880, on Mill Street; and a branch of First Southern National Bank.

VanHook also has helped with the reconstruction design of Logan’s Fort.

He was a consultant with the Lancaster Grand Theatre restoration project in Garrard County, and renovations to the Garrard Courthouse and annex, the Bailey House.

He helped with restoration and new projects in Washington and Rockcastle counties.

Paul Stansbury says the idea behind offering a recent writing workshop was simple: Write about a life experience — a... read more