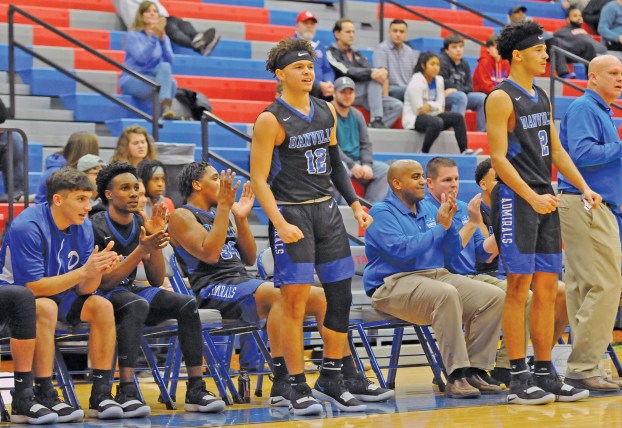 HARRODSBURG — Danville’s two games against the 46th District this season have been classic 12th Region battles.

The Admirals have proved their mettle in both games, the latest coming in a 57-49 victory at Mercer County on Tuesday in their first road game of the season.

Points were at a premium early in the game, with Danville jumping out to a 12-8 lead after one quarter.

“We have a good team. But you have to make sure you realize who you are,” Danville head coach Ed McKinney said. “We’re not just going to do whatever we want whenever we want. We have a bunch of good players but that doesn’t mean you can exert your will whenever you want to. We’ve got to understand that.”

McKinney said his team was “impatient” in the first half after struggling against Mercer’s defense. The Admirals want to play fast-paced — Danville scored 91 points in the season opener and 81 points against McCreary Central last week — but the Titans did well to limit the visitors to one shot on offense.

“I think our guys know we have a chance to be pretty good, they realize in practice that they can do some things,” McKinney said. “Then I think we got a little impatient, tried to do a little too much individually in the first half. But I thought our effort was good, you give up 23 points in the first half, you can’t be mad about that. I thought our defense was good, we did a lot of things good defensively.”

“Darrian Bell, we’re a big fan of his. The kid battles his tail off, he plays basketball the way it’s supposed to be played  for an undersized big,” Hamlin said. “I thought DeShaud St. Martin played well for them, he does a good job on the glass. I thought we did a good job boxing out. But it’s just sometimes, when your (opponent is) bigger and more athletic, sometimes box-out calls don’t happen. I can’t remember but one or two times during the game where we didn’t have a butt on somebody’s knee or somewhere else. I thought the kids battled and scrapped, we just didn’t make enough winning plays.”

At halftime, Danville led 29-23. Baughman had 13 points in the first half to lead all scorers.

“Give coach McKinney and them credit, they played pretty good defense tonight,” Hamlin said. “Just off the top of my head, I can probably think of 7-10 shots that we missed that we normally make. Might have had a little to do with their length. It’s just, we didn’t play very well offensively and I think a lot of that is credit to Danville.”

Mercer forward Kaelin Drakeford was limited in Tuesday’s contest. He’s been dealing with an ankle injury that has sidelined him for most of this season.

“Kaelin has been working hard to get back,” Hamlin said. “I probably played him a little too much tonight, but he’s a competitor. He didn’t want to come out and we kind of left that up to him. We’re going to be smart going forward with him. He’s one of the guys that we’re going to depend on a lot this year. It’s encouraging to see him back out there. I know he’s frustrated because he’s not happy with his performance, but for us, he added a different dimension on the glass and moved well offensively. Once he gets his legs back under him, gets in a little more shape, he’ll be the Kaelin we thought he was going to be.”

Mercer County would bring the score to within a basket multiple times in the second half but the Admirals did enough to keep a lead throughout the final 16 minutes.

“We made enough offensive plays to stem the tide,” McKinney said. “And a lot of times it was around the rim, which is where we needed it to be. Dante made a big three to put us up five, then we made several plays around the basket. Zach did a lot of good things, he just struggled from the line. But he did what he was supposed to do late in the game.”

Thornton’s and-one finish put Danville ahead 52-47 with 47 seconds left, then Tevin Kavanaugh put the game out of reach with a pair of free throws to make it 54-47 inside of 30 seconds left.

Danville improves to 4-0 on the year while Mercer falls to 2-3.

“Any time you win on the road, it’s a good win,” McKinney said.

The Titans will visit West Jessamine on Friday for their first district game of the year.

“It’s still early, our guys are still trying to work in pieces to the puzzle and we’re trying to work in a rotation with our coaches to get guys the minutes they need in the right combinations,” Hamlin said. “Right now we’re not doing a very good job. It’s a learning process for us, we’re not used to losing this much. One thing I will say, we had four or five losses last year, things were teetering and the culture wasn’t necessarily built. This year we had guys calling themselves out in the locker room for individual accountability. That’s a sign of growth. When those things happen you have to like the maturation and think that we’re headed in the right direction.”

Mercer County can play fast. Danville’s learning to play that way. The Admirals hosted Mercer on Monday and fell in... read more