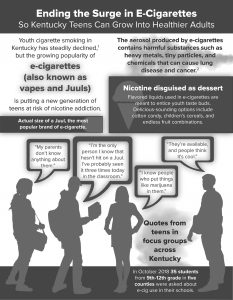 A two-page infographic from the Foundation for a Healthy Kentucky and Kentucky Youth Advocates aims to fight the surge in use of electronic cigarette usage among Kentucky teenagers. “While youth cigarette smoking in Kentucky has steadily declined, the growing popularity of e-cigarettes, known as vapes and Juuls, is putting a new generation of teens at risk of nicotine addiction,” the foundation and KYA said in a news release.

“Kentucky just can’t afford to addict another generation to tobacco products, and the fact that youth e-cig use is often a gateway to cigarette smoking makes immediate action imperative,” said Ben Chandler, president and CEO of the foundation. “Kids may think e-cigs are safe for them to use, but they’re not. Short-term, the nicotine in e-cigs harms the parts of kids’ brains that control learning and impulse control. E-cig vapor also has chemicals and metals that can damage lungs, for both the youth who is vaping and those who inhale the secondhand vapor. Longer-term, the gateway effect means kids who use e-cigs today are significantly increasing their risk for cancer, heart disease, stroke, oral disease and tooth loss, and all the other smoking-related health issues later on.”

The graphic has findings from a series of “focus group” discussions in October with 35 Kentucky teens about their knowledge, perception, and usage of electronic cigarettes in their high schools in Clay, Jefferson, McCracken, Monroe, and Campbell counties. Here’s what some of them said:

“I’m the only person I know that hasn’t hit on a Juul. I’ve probably seen it three times today in the classroom.”

“My parents don’t know anything about them.”

“People think that since they were made to help get people off cigarettes it means they’re not harmful.”

The discussions “also reflected anecdotal evidence that many teachers, school administrators, and parents aren’t aware of the newest generation of e-cigarettes, which look like USB jump drives,” the news release said. “Because they don’t emit odors and the vapor can be hidden, adults may not be aware that the youth under their care are using e-cigs.”

The flavors in e-cigs “attract teens to the products and their varying levels of nicotine can lead to teens’ addiction, which can cause lasting damage to adolescent brain development,” the release noted. “Some e-cigarettes contain as much nicotine as an entire pack of combustible cigarettes.”

Dr. Terry Brooks, executive director of Kentucky Youth Advocates, said in the release, “You cannot talk about health and kids without talking about e-cigs. . . . E-cig use is rampant; it is unregulated. And unless we as a commonwealth treat e-cigs as the health threat it is — in terms of now and in the future — then in 2038, Kentucky will still be the cancer capital of the nation.” 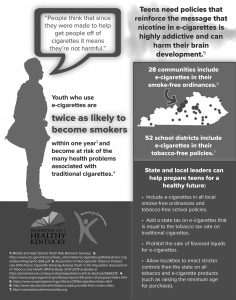 Brooks added, “Purveyors of e-cigs know exactly what they are doing in offering a gateway product to tobacco use and we need to call them on it. Kentucky’s kids need our elected leaders, from county courthouses to Frankfort, to act on their behalf. Those decisions around regulating e-cigs for young people will impact kids today and long into their futures.”

The foundation and KTA recommended four policy measures to help prepare teens for a healthy future free of tobacco use:

• include e-cigarettes in all local smoke-free ordinances and tobacco-free school policies;

• add a state tax on e-cigarettes that is equal to the tobacco tax rate on traditional cigarettes;

• prohibit the sale of flavored liquids for e-cigarettes; and

• allow localities to enact stricter controls than the state on all tobacco and e-cigarette products (such as raising the minimum age for purchase).

The infographic and focus group study findings were announced at the Coalition for a Smoke-Free Tomorrow’s the “Next Generation Tobacco: The Impact of E-Cigarettes on Kentucky’s Future Health” conference in Louisville.

Kentucky Health News is an independent news service of the Institute for Rural Journalism and Community Issues, based in the School of Journalism and Media at the University of Kentucky, with support from the Foundation for a Healthy Kentucky.