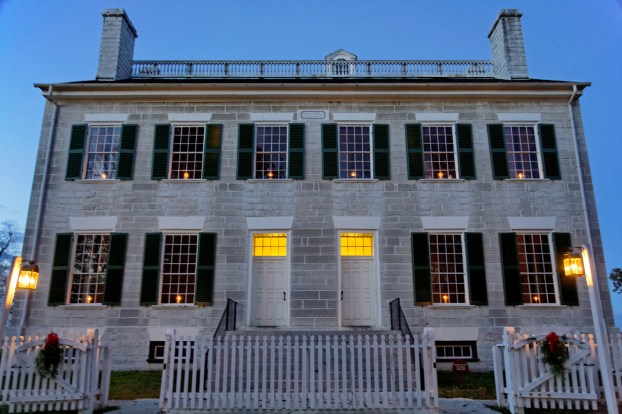 Two weeks ago, a chain link fence surround the home, which was covered with scaffolding this summer.  It was finally taken down, said Vice-President of Programing and Marketing Billy Rankin. “That changed everything,” he said.

While work was being conducted on the home, hard hat tours were sometimes available to the public, Rankin said. Tour guides lead groups through areas in the enormous building while construction workers installed a climate control system, museum-quality lighting, repaired plaster and masonry, painted, restored the 120 windows and replaced the roof. 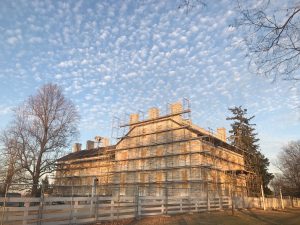 There wasn’t any furniture or displays that really demonstrated how the Shakers lived. Rankin said guides explained visitors that it was “preservation at work.”

Rankin said even though the building, as well as the Meeting House — which has also been undergoing renovations during the $5.1 million project — is now open, there are still no displays to view. Before it’s safe to add exhibitions, he said the Family Dwelling House will be closely monitored for several months as it “gets acclimated” to the new climate control system.

He said the last renovations to the home was in the 1960s. Then, the building was pretty much kept as the Shakers had used it. But over the years, the fluctuation in temperature and humidity inside the structure caused a lot of damage. Sometimes condensation was dripping off the walls, Rankin said. When the Shakers lived there, they didn’t have as many problems because they were opening windows for ventilation.

While the house is getting used to being in a climate controlled environment, final designs for exhibits are being developed by scholars and designers. He said visitors shouldn’t expect a full-experience until late fall of 2019.

Rankin’s enthusiasm for the house’s future ability to educate people about the Shakers and Kentucky history is almost tangible when he speaks. With the addition of delicate artifacts such as furniture, tools, textiles, manuals and hymnals, people will learn more about the Shakers.

“It will provide a greater, richer history” story, Rankin said.

They’ll also be explaining in more detail how freed slaves and immigrants came to live and work with the Shakers. And gender roles will be addressed, Rankin said. Many people may be surprised to learn that the men and women were equals and it wasn’t uncommon for women to be leadership roles.

The Centre Family Dwelling House was built by the Shakers between 1824 and 1834 and was the second-largest stone building in Kentucky at the time — right behind the capitol building in Frankfort, Rankin said. And it housed up to 80 Shakers at a time.

The 21,000-square-foot stone building is a three-story structure with a cellar. It contains 14 bedrooms and at least six kitchens where food was prepared, preserved, cooked, baked and stored, Rankin said. There is a large dining room the Shakers used, but because of their population, they had to eat in shifts.

On the second floor is a “grand and impressive” meeting room that has the unique feature of a barrel-vaulted ceiling, Rankin said.

Being able to once again open the Centre Family Dwelling, Rankin said was an “incredible project and incredibly rich in history.”

“It’s a facinating story we get to tell.”

On Friday and Saturday evenings, at 5:30 p.m. and 7 p.m., candlelight tours of the Centre Family Dwelling will be available through Dec. 22, where visitors will learn about the Christmas beliefs of the Shakers. Over the next several months, more experiences will be installed in each room of the house, including hands-on learning for guests of all ages. Info: shakervillageky.org, (800) 734-5611.