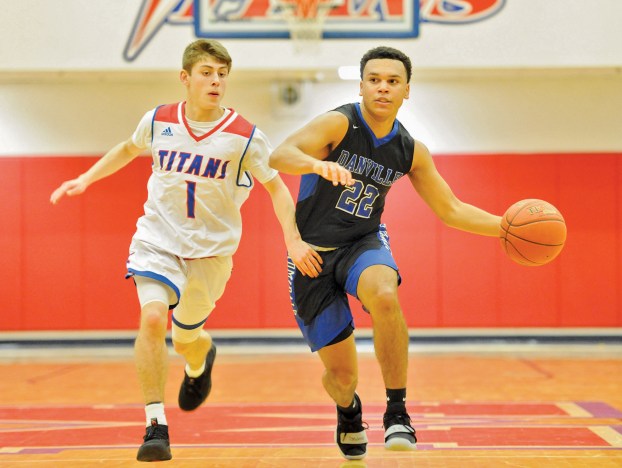 Matt Overing/movering@amnews.com Danville senior Tevin Kavanaugh has scored seven points in four games for the Admirals this season but plays a key role as a facilitator and defender for his team.

Danville guard Tevin Kavanaugh has a unique role for the Admirals in his senior season.

Kavanaugh isn’t a scorer — he’s scored just seven points in four games — but has been a key starter for the Admirals in their perfect 4-0 start this season.

“He’s doing a lot of good things. He’s been great all year,” head coach Ed McKinney said. “He wants to play at the next level and he’s been sacrificing a lot for us. He’s playing great defense, he’s trying to get the ball where it needs to go. He could shoot it a few more times but he wants to win, so he’ll do whatever it takes to win.”

That was epitomized in Tuesday’s victory at Mercer County: Kavanaugh took just two shots during the contest, but with the game on the line late in the fourth quarter, was fouled and stepped up to hit two free throws to help put the game away.

“That’s what a great point guard does. He makes the plays he needs to make to win,” McKinney said. “Whether it’s free throws, making a pass, hitting free throws or getting us in the right call, whatever … That’s what I respect, it’d be easy for him as a senior to think about ‘me’ a little bit, but he’s not thinking about himself at all. As a coach, what else can you ask for? Those are the kind of kids you remember the rest of your career. He’s been super all year.”

Kavanaugh knows his role: If the Admirals are playing man-to-man, he’s on the opponent’s best ballhandler. In Danville’s 1-3-1 zone, he’s the one running the baseline.

Coach McKinney likes his versatility — in a 3-2 zone, Kavanaugh can play up top against quicker point guards or on the wing. 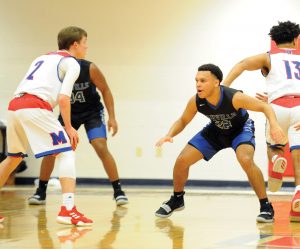 “My role is to just get everyone involved and D up, mainly,” he said. “We’ve got shooters everywhere, Dante (Hayden) and DeShaud (St. Martin) can score everywhere. Zach (Thornton) is dominant around the rim, Darrian Bell is too. Then we’ve got players off of the bench who can score. Me taking less shots helps the team, so that’s what I do.”

It’s showing in the stats: Hayden, St. Martin and Bell all average over 12 points per game. Thornton is next at 8.5 points per game. The Admirals’ balance has helped them to their perfect record, but they know it’s early in the season.

“(Our depth) is great, it helps a lot during practice because it gets everybody better,” Kavanaugh said. “As a team, we just get better in practice every day. By far we’re better in practice this year, we’re deep, it gets nice during practice. We’re better each and every day and that’s why we’re 4-0. But right now we’re just worried about the next game against Wayne County, they’re one of the top teams in the region. We’ve just got to stay focused in practice.”

McKinney said that Kavanaugh’s selfless play is being noticed by his teammates, which is one of the best compliments a player can receive.

“I think the guys really know what he means to us,” the coach said. “They’re very vocal with him about what he means to us, whether it’s a group text or whatever. They’re vocal. That’s what I told him the other day, when I tell you, you might think it’s coach speak or whatever, but when your teammates tell you, there’s nothing more gratifying than hearing it from your teammates.”

Kavanaugh certainly has a tough role on defense, but he prides himself on playing against an opponent’s best player.

It’s a relatively role for Kavanaugh, who as a senior has seen his minutes increase in his final year for the Admirals.

“He’s trying to be a leader, he’s trying to do what we ask him to do,” McKinney said. “He’s doing a lot of great stuff. I’m really proud of where he is, this is the first year really in the wars. He played a few minutes in crunch time last year, but this year he’s done a great job.”

HARRODSBURG — Danville’s two games against the 46th District this season have been classic 12th Region battles. The Admirals have proved... read more