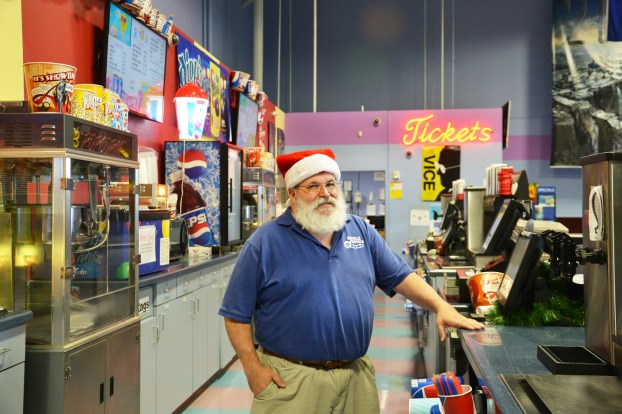 Robin Hart/robin.hart@amnews.com Robin Strey has worked in the movie theater industry for about 38 years, and is a manager at the Danville Cinemas 8. He is also appearing in a promotion advertisement welcoming everyone in the audience to watch the show.

Keeping them entertained: Danville man has been in movie business for almost four decades

Robin Strey is a familiar face to local movie goers. He’s worked in area theaters since 1977, and now he’s even on screen promoting the Danville Cinemas 8 before each movie starts.

This time of year, he looks even more familiar — his full, white beard is perfectly complemented by the red Santa hat he wears. 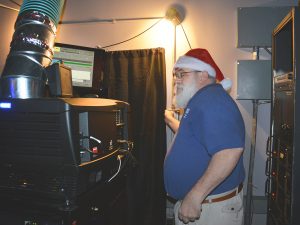 Robin Hart/robin.hart@amnews.com
Movie projectors at Danville Cinemas 8 are capable of only showing digitized movies now. Robin Strey, manager, said the projector room has to stay dark so that light won’t seep into the theater and distract the audience.

Robin started working at the Danville Cinemas while attending Danville High School in 1977. “The twins,” as he called the movie theater, was on Hustonville Road and had just two movie screens. Robin remembers what was showing then — “King Kong.”

Being in the movie theater industry for nearly 38 years now, Robin said he’s seen a lot of changes in the way movies are received and shown. When he first started in the business, movies were large 35mm film reels that had to be carefully loaded onto movie projectors.

Just within the past 17 years, movies have become digitized and distributed through hard drives that are delivered to the theater, then downloaded onto a library manager system, where they are stored in the server’s memory and sent to any of the eight digital projectors that sit high atop each of the “movie houses” at the cinemas, Robin said.

Robin controls the starting of the movies, advertising and sound from a computer in his office, which sits near the ticket line and concession counter.

On a typical weekday, Robin arrives at the Danville Cinemas 8 around 11:30 a.m. and leaves at 6 p.m. He is the only person running the shows until the next manager arrives for the evening shift. Movies usually start showing around 1 p.m.

“It’s dead when schools are in session,” Robin said. Mostly senior citizens come to watch movies during the day.

On Friday nights and Saturdays, when there’s always a crowd, he puts in more hours and there are 12 employees on hand selling tickets, scooping popcorn and filling soda cups.

After he arrives every morning, Robin turns on the lights, computers, arcade machines and projectors. Then “I like to go in and check out the houses to see if they feel right and the seats and arms look good.”

A janitorial team takes care of the cleaning every night.

Then, Robin grabs a broom and dustpan and heads outside to patrol the parking lot for garbage. Mondays are the worst, he said. Sometimes he has to pick up several bags of trash that people have left over the weekend.

He said he also checks the movie houses after every show for litter, too. Some adults just leave their trash in the seats and on the floors.

Robin believes more improvements will be coming to the movie theater industry in the years to come. “There will be a whole lot more technology,” possibly with laser 3D movies where traditional screens won’t be needed and movies will be shown on gigantic plasma-type TV screens.

Robin’s favorite genre of movies are science fiction, with his all-time favorite being “Jaws.”

He likes just the plain movie popcorn, but he said it was better years ago when real butter was used.

Danville Cinemas 8 is a local, privately owned company, which is pretty rare in the theater business, Robin said. And, he laughed, it’s open 365 1/4 days a year — to account for leap years.

Robin Hart/robin.hart@amnews.com Part of Robin Strey’s morning routine as manager when opening the Danville Cinemas 8 is patroling the parking lot for trash.

Robin Hart/robin.hart@amnews.com Movies are sent to The Danville Cinimas 8 on hard drives, like the one Robin Strey is showing. The movies on a hard drive are then put into a library management system server where they are stored and electronically sent to anyone of the digital projectors.
You Might Like