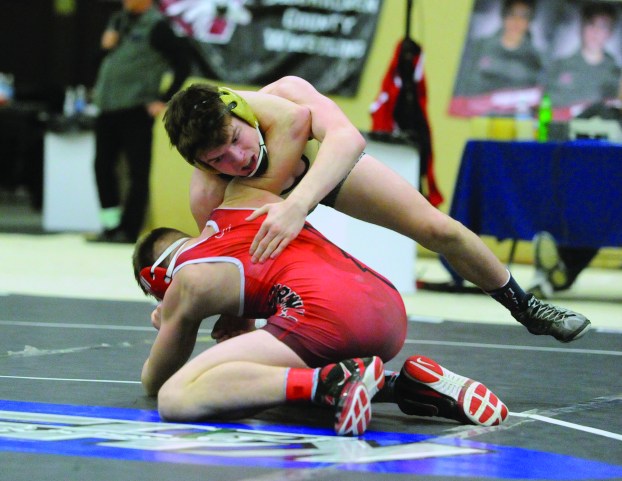 Boyle County’s wrestling season is off to a strong start.

Even stronger than what head coach Seth Lucas expected.

Lucas, who was an assistant last year and swapped roles with Joedy Burke this year, said that his youth have really stepped up this year, most recently at the Rebels’ Big Brother Duals last weekend. Boyle placed second.

“We’ve wrestled pretty good all year, actually,” Lucas said. “We’ve had a lot more success this year with the younger guys compared to last year. Our younger guys are wrestling really good and keeping us in duals and the older guys are doing their job, handling their end of the deal. I’m honestly very surprised with how we’ve wrestled.”

Only one member of the team has a losing record this year, and the Rebels have been paced by senior Jordan Bates’ stellar 16-0 start to the year.

“He’s tremendous, he just puts in work,” Lucas said of his star senior. “I try to get him days off and he won’t. I tell him to take a break away from the sport and he’ll say he wants to lift. We’ve had a couple snow days and he’ll ask to get a lift in at 11 in the morning, then come into practice at 3 o’clock ready to roll. The work ethic he’s putting out is trickling to the younger guys. He’s stepped up tremendously as a leader.”

Bates placed seventh at state last year and has been focused on improving that mark since the state tournament in February. But he’s not only worried about himself, Lucas said.

“He watches film and breaks it down with me, look at stuff that other kids need to work at as well,” the coach said. “He puts another perspective on it, and I’ll always listen to that because he’s a captain and he’s really stepped up. His attitude has really changed the younger guys, which helps our success. They see that he’s so good and he’s only wrestled four years. Some of those younger guys have wrestled seven, eight years are saying that they want to be just like (Jordan), or better. You can see their intensity in the practices, hitting their moves right or asking what they’re doing wrong. The way he’s processing wrestling has helped out a lot, for me and the other guys.”

Lucas noted young wrestlers who have stepped up this year — Jackson Burger (8-7), Andrew McHollon (10-3), Ethan Montgomery (6-0) and Kevin Missildine (11-5). Ben Rush is experienced as sophomore and holds a 10-1 record, and Collin McGlone is next behind Bates with 13 wins this season to just three losses.

“Really they’re all standing out to me,” Lucas said. “Ben Rush was a freshman last year, he was one win away from placing at state. Then we’ve got a transfer in from Illinois, Logan Tuggle (8-1), who has made some noise at 132 pounds and 138 pounds. Logan has only really been with me for three or four weeks. He’ll be tough as nails by the end of the year.”

Lucas said the early-season successes have been in part due to a strong offseason for the team.

“We’ve been making changes and adjustments all summer,” he said. “We’ve been to camps, we went to FCA camp together, we’ve traveled from Virginia Beach to Indiana, Ohio, Tennessee, Fargo, North Dakota. We’ve been all over to wrestle and get better. That’s really starting to show right now for the younger guys and older guys as well.

“I’m just excited. At the start of the year we were kind of expecting to take our lumps this year because we’re young, but our overall dual record, we’ve already won 11 matches. Our dual with Walton-Verona came down to a seventh grader. Normally you wouldn’t rely on a seventh grader to win a match, but they’re stepping up. The whole team is really contributing to our wins.”

Danville guard Tevin Kavanaugh has a unique role for the Admirals in his senior season. Kavanaugh isn’t a scorer —... read more