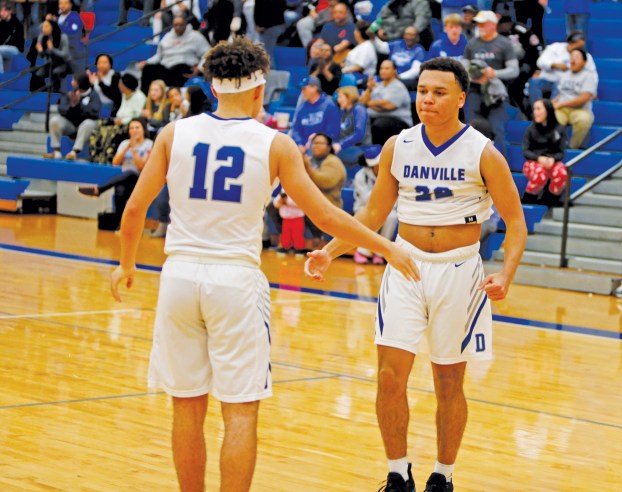 Tests are commonplace for high school students as the first semester ends and Christmas break approaches, and it was exam time for the Danville basketball teams Friday night.

Both the Danville boys and girls faced stern tests in a home doubleheader, and both passed with flying colors.

Darrian Bell’s steal with six seconds to play and Dante Hayden’s two free throws with 1.7 seconds left gave the Danville boys a 60-57 victory over Wayne County that was the latest in a series of big wins.

Less than two hours earlier, the Danville girls posted their first big win of the season when they pulled away from Bullitt East in the closing minutes for a 64-57 victory.

Danville 60, Wayne County 57 – The Admirals (5-0) led by 11 points midway through the fourth quarter, then survived a rally by the Cardinals (3-2) thanks in large part to Bell’s big steal.

Trailing 58-57, Wayne was inbounding the ball in front of its own bench with 6.3 seconds remaining, but Bell stole the inbounds pass and made a beeline for the basket. He was fouled while going for a layup, and a nosebleed forced him out of the game.

Dante Hayden came off the bench to replace Bell at the free-throw line, and he made two shots to give Danville a three-point lead with 1.7 seconds left. Wayne’s Jadon Pryor got off a shot from the center line that would have tied the game, but it bounced off the rim.

Danville coach Ed McKinney said this was a significant win in part because the Admirals have carved out a place among the top teams in the 12th Region, meaning that they had the full attention of a Wayne team considered the preseason favorite to win the region.

It was the latest noteworthy win for Danville (5-0), which had already defeated West Jessamine and Mercer County in the early days of the season. McKinney said, however, that such wins in December won’t matter as much in February and March.

“It’s a good win for us, and we’re proud of it, but it means a win in December, and it’s about how good everybody gets from here,” he said. “I think we’ve got guys that will keep working, I think we want to be good. We’ve got some hunger. We want to keep getting better.”

Hayden scored 12 points and Trey Dawson added 10 to lead a balanced Danville attack. The Admirals shot 51 percent from the field and held Wayne to 36 percent over the first three periods before the Cardinals went 10 for 15 in the final period.

Danville led 54-43 with 4:20 to play before Wayne came roaring back with an 11-2 run capped by seven points by Thomas Spencer, who led the Cardinals with 19 points.

“They made a lot of plays,” McKinney said. “We’ve got to hit some free throws, but I didn’t think we did anything to lose it. We stayed aggressive, we kept attacking the rim.”

The Admirals left the door open with three straight missed free throws, including two on the front end of the bonus, and they were just 7 for 16 at the foul line.

McKinney said Bell’s big play was typical of what he can do for the Admirals.

“He’s a playmaker,” McKinney said. “He’s either going to draw charges or get steals. He’s gaining the respect of a lot of coaches the way he plays. He does a lot of stuff for us.”

Thornton and Tevin Kavanaugh, who had a key layup with 1:00 left to stop Wayne’s run, scored nine points each for Danville. Seven Admirals had at least six points each.

Danville 64, Bullitt East 57 – The Lady Admirals (5-1) scored 13 straight points late in the game to pull away from the Lady Chargers (4-2) as the bounced back from a loss to Mercer County earlier in the week.

Lara Akers scored seven of those points, sinking a 3-point shot with 1:25 left to give Danville a 60-54 lead and capping the run with a steal and layup that made it 64-54 with 35 seconds to play.

It was a significant reversal of fortune for the Lady Admirals, who led 46-38 in the third quarter, then got only one field goal over the next 9:09. Bullitt East used a 16-5 run to retake the lead it lost in the second quarter before Danville regained control.

“They’re a really nice, so I was very pleased with the comeback,” Danville coach Judie Mason said. “We still made some dumb mistakes, but what I’m working on right now is the kids being able to follow a scouting report.”

Mason said there was a lot to like about the way the Lady Admirals played four days after giving up 93 points in their loss to Mercer.

“I wasn’t so much worried about this game as I was about getting better, and we got much better tonight,” she said. “I thought our half-court defense was better, our communication was better tonight.”

Bullitt East raced to an 11-0 lead, but Danville went in front during a 12-1 run in the second quarter and extended its lead in the first 4 1/2 minutes of the second half.

“It’s hard for me to say anything bad about the 11-0 start the way we finished,” Mason said.

Ivy Turner led Danville with 19 points and 12 rebounds, Akers had 16 points and Desiree Tandy added 11. Tandy hit seven of eight free throws, including four of four in the fourth quarter.

The Lady Admirals committed 17 turnovers but forced 19, including eight in the fourth quarter.

“Right now the uglier the game, the better off we are, and I’m OK with us making mistakes as long as we get them in a running game,” Mason said.

Mason joked that she was surprised that her players had the stamina to outlast Bullitt East after three tough practices.

“I’m surprised they had the legs they had tonight, because we’ve had a lot of tough practices this week. We’ve done a lot of toughness drills, because I felt like Mercer County out-toughed us,” she said.