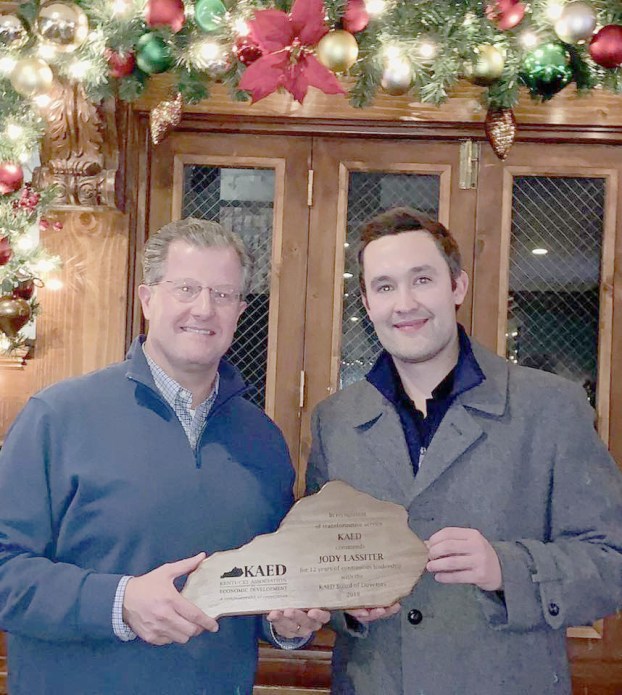 Boyle County’s lead economic development professional has been given a special state-level recognition by the Kentucky Association for Economic Development.

Jody Lassiter, president and CEO of the Danville-Boyle County Economic Development Partnership, was recognized for serving on KAED’s Board of Directors for 12 years during a trip to New York City earlier this month. KAED representatives were in the Big Apple to pitch Kentucky’s communities to New York-based site selection professionals.

“Board directors serve three-year terms and are elected by a membership of 700 individuals,” KAED Executive Director Matt Tackett said. “(Lassiter’s) tenure not only represents incredible commitment of leadership by Jody to KAED, but also reflects the confidence and respect from Kentucky’s family of economic developers.

“Jody’s professionalism, sophistication, success and also kind-hearted nature have been very impactful for KAED, but more importantly for Danville-Boyle County and the entire commonwealth. Our association and our state are stronger as a result of his service.”

Lassiter was presented with a wooden plaque in the shape of Kentucky honoring him for serving on the board for 12 years.

“I’m honored that my peers continually chose me to serve for such a long tenure, and I’m thankful that my (Danville-Boyle EDP) board has supported my active participation in KAED,” Lassiter said. “I hope to be useful in other opportunities through KAED to further promote Kentucky’s economic development profession, public policy and marketing.”

Tackett said the award given to Lassiter is a “special recognition” and not something given on a regular basis.

“I’ve been on the job at KAED just over a year, and from day one, Jody has been a trusted advisor, supporter and also a friend,” he said. “Jody’s voice is instrumental in our public policy work. We have influenced several pieces of legislation that positively impact Kentucky families and communities, which would not be possible without Jody’s guidance.”

Tackett said Lassiter has also helped in recruitment efforts on a global scale and helped with “a new initiative at KAED through which we will directly invest funds into Kentucky communities to enhance their ability to create jobs.”

“Throughout every detail of my work, Jody is an important mentor,” he said. “He is very busy working on behalf of his community, but he always makes time to take a call from me to ensure we’re moving in the right direction, and I am humbled to work with him.”

Lassiter has been head of the Danville-Boyle EDP since 2007.

Editor’s note: This is the second in a series of stories highlighting goals and objectives discussed during a recent Danville... read more