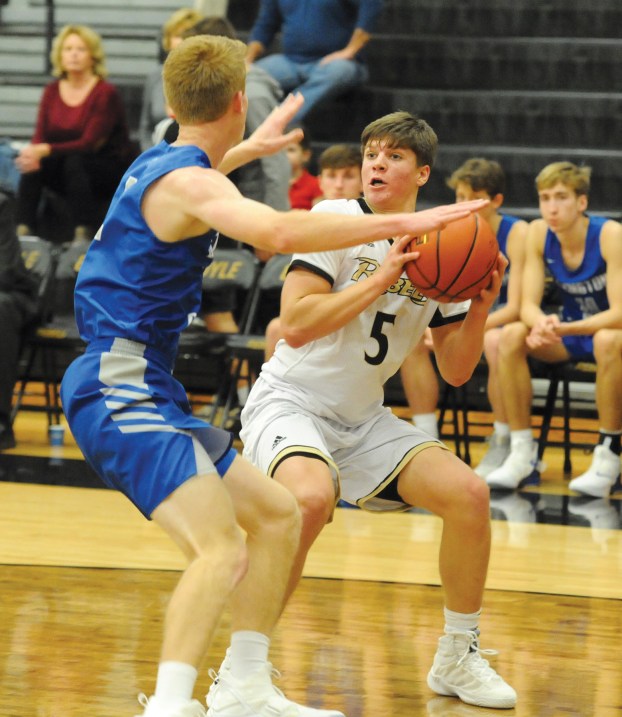 LCA too much for Boyle County in early-season matchup

Boyle County’s matchup with LCA on Friday was a big-time test for the Rebels’ fourth game of the season.

LCA, ranked among the top teams in the state, beat Boyle 51-39 behind 24 points from Kyle Rode.

Boyle (2-2) was ice cold from the field to start the game against LCA (6-1) and finished the game shooting just 31.8 percent from the field. Luke Imfeld led the Rebels with 14 points, all coming in the second half. Senior guard Caleb Jackson had nine points and nine rebounds for the Rebels.

“We played tough, we had nine turnovers for the game,” Adams said. “I thought we should’ve attacked a little bit more when we settled. To start the game we had some awful good shots, they just didn’t fall. I think we were ready to go, a little geeked up maybe. Then, you know, Rode is a load. I thought we did as best we could against him. We made some mistakes when we got tired.”

Rode had 13 points on 12 shots in the first half for LCA and finished with 24 points and 11 rebounds. He’s committed to play basketball at Division-I Liberty.

Luke Sheperson earned the start for Boyle and was tasked with guarding Rode — Sheperson led the Rebels with 16 points and 12 rebounds earlier this week against North Hardin.

“He’s just athletic. He just gets after it,” Adams said of Sheperson. “But where he’s relatively new, he doesn’t know the offense or where to go, that clogged things up some. But defensively he did a great job. He’s only been out about 10 days maybe. We knew that going in but we wanted his athleticism. He did a nice job, but we’ve just not been together as a group to go against that type of competition.”

Sheperson finished with two points during Friday’s game. Aden Slone and Will Imfeld each scored seven points for Boyle. Slone had four rebounds and three assists to add to his tally.

LCA scored 17 points in the third quarter to extend its lead to 40-22 with one quarter to go. In the fourth, Boyle’s shots finally started to fall. The Rebels cut LCA’s lead to 12 points after a 9-3 run, but the Eagles were able to keep a double-digit lead for the remainder of the game.

“We’ve got a lot of things we can work on, but the kids never quit,” Adams said. “LCA is ranked in the top 10 in the state and we got beat by 12, we could’ve done things better. That’s encouraging. And the kids are upset, they’re upset, they think they should’ve done better. We’re just not where we need to be yet against that type of competition. That’s OK, it’ll make us better.”

Boyle County’s wrestling season is off to a strong start. Even stronger than what head coach Seth Lucas expected. Lucas,... read more