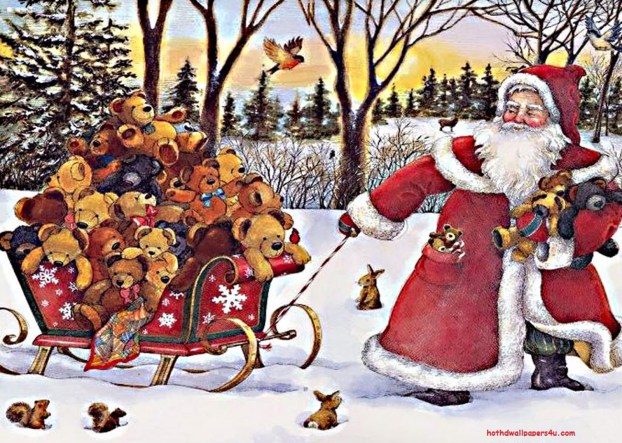 It’s usually children writing letters to Santa, but back in December 1899, it was the other way around.

The Kentucky Advocate’s columnist, “The Penciler,” published a letter from Santa Claus from the North Pole, dated Dec. 17, stating his plans for Danville.

Although Santa had bad luck with losing two of his reindeer and suffered from rheumatism, he promised he would head this way on Christmas eve.

“If anybody tells you that I am not coming to Kentucky this year, don’t you believe it,” he wrote. “I heard that some wicked people were telling my friends that I had been buried in a big snow drift up here and was killed, but this is all wrong. I never felt better in my life and I never had more things to give away.

“It is true that the rheumatism has been bothering me more than ever — you know when a fellow gets to be nearly two thousand years old his legs begin to get still — but my wife promises to cure me Friday night, so that I can drop down to the Methodist church for a little while and be all right for Christmas.

“I had mighty bad luck a while ago. Both my reindeer were killed, and I didn’t for the life of me know what I would do this Christmas. I studied and studied, but couldn’t think of a thing. Finally, I went to my bicycle factory and called all my boys together and told them about my trouble.

“I told them that I had to get to Danville some way, if I didn’t get anywhere else. You know that I have five thousand boys working in my bicycle shops, and they are all the brightest little fellows you ever saw.

“Where do they come from?

“Why, when little boys die they are allowed to come and work in my factories. They make toys, and fireworks and wagons, and rocking horses and drums, and all those sort of things while the little girls are allowed to come down from heaven and make my dolls, and candies, and other good and pretty things which the awkward boys don’t know how to make.

“Well, I told these boys that as my reindeer were dead they would have to make me something else, and what do you suppose those boys did? In less than a week they had be the biggest flying machine you ever saw. This machine will carry me along the skies at a rate of ten miles a minute and at the same time carry all of my toys and candies and fireworks and a whole crowd of boys and girls who will help distribute the presents.

“I am getting so fat that I will have to make my boys run down the small chimneys. I want the boys who live in houses where where they have no grates, but use furnaces, to leave all of the windows unfastened Christmas eve night.

“I don’t see what people want with furnaces, anyway.

“One time I started down the chimney and instead of coming out at the grate I almost got into the furnace before I knew it. I tell you I got out of that place mighty quick.

“I wish you could come up here to the North Pole and see us work. We are running night and day. Our electric lights at night almost outshine the sun.

“Well, if my flying machine doesn’t break down, you may expect me on time next Sunday night.

Boyle County’s lead economic development professional has been given a special state-level recognition by the Kentucky Association for Economic Development.... read more