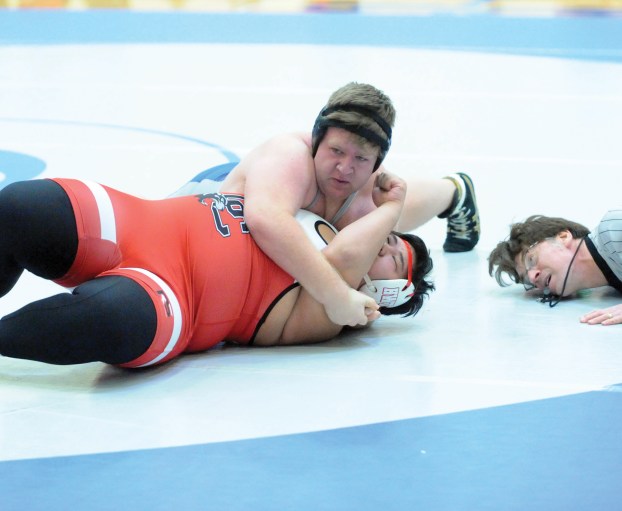 Danville senior Pierce Haines placed sixth in his division at the Lafayette Five-Star Classic over the weekend.

Boyle County and Danville wrestling teams hit the road over the weekend for wrestling tournaments in Lexington and Tennessee.

“We have been battling illness all week, and decided to give some guys time to get well,” coach Sallee said. “I was really happy with how we went out and competed. Charley Blevins stepped into our 106 spot this week. She’s just an eighth grader. She didn’t win, but she went out and wrestled hard.”

“Micah Chappell, Christian Poynter and Caleb Campbell got really tough draws,” coach Sallee said. “That’s just how it goes sometimes. Colby Stevenson continues to be impressive. He’s aggressive, goes hard, and does not like to lose. A little more time and experience, and he will be really solid for us.

“Sallee placed 3rd, and Haines 6th. Both wrestled well. We are learning. We will get back in the room on Monday and fix a few things. Then, we head to Bullitt Central on Wednesday and Western Hills on Thursday.”

Boyle County visited Tennessee over the weekend in the Beech Invitational in Hendersonville, Tennessee.

The Rebels were led by a 4-0 performance from Jordan Bates, who placed first in the 138-pound weight class. Head coach Seth Lucas said Bates pinned every wrestler he faced.

Logan Tuggle placed third in the 132-pound weight class, falling to the No. 3-ranked wrestler from Georgia, Lucas said.

138 Christian Poynter lost by fall to Jake Insko of Apollo

285 Pierce Haines won by fall over Jevaun Harris of Lafayette

120 Sallee won by major decision, 15-5, over Trevor Villums of Male

126 Chappell lost by fall to Thomas Deck of Madison Central

195 Stevenson lost by fall to Rock Hamilton of West Jessamine

285 Haines lost by fall to Jason Tipton of Alcoa, TN

195 Stevenson lost by fall to Jason Coles of North Hardin

285 Haines won by decision, 8-3, over Zac Strey of Lafayette

120 Sallee lost by fall to Jeffrey Kinley  of Madison Central

285 Haines lost by fall to Max Harris of Madison Southern

120 Sallee won by fall over Lucas Saunier of Scott County

120 Sallee won by decision, 7-2, over Trevor Villums of Male

285 Haines lost by forfeit to Jason Tipton of Alcoa, TN

Boyle County results at the Beech Invitational in Hendersonville, Tenn.

Boyle County participated in the Woodford County Invitational over the weekend and sophomore Campbell Coyle had a day to remember.... read more