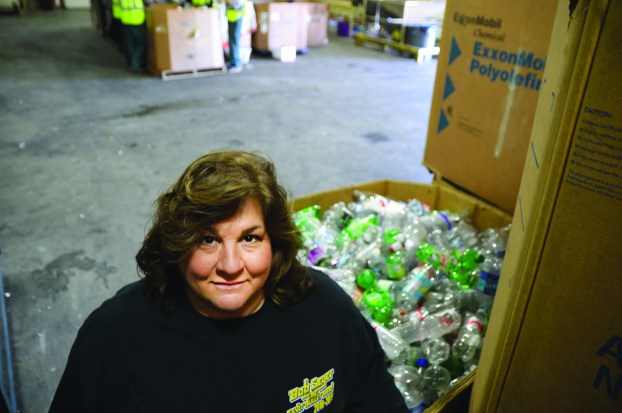 Angie Muncy is still settling in. “The next time you come back in here, you won’t be able to even recognize it,” she says from her office inside the Government Services Building.

“My office is always like my other home, so I have a lot yet to do here.” She has plenty of practice, with 11 years under her belt as solid waste coordinator/enforcement officer/recycling coordinator in Leslie County. She established that county’s recycling center through grants. 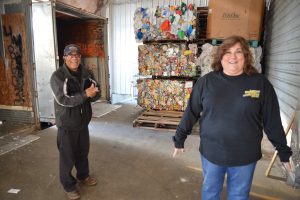 Photos by Bobbie Curd/bobbie.curd@amnews.com
Angie Muncy jokes with recycling center manager Ralph Smith in the rear of the center, next to compacted blocks of aluminum cans.

So far in her new position, she says the biggest change has been the five convenience centers she manages, in addition to the recycling center attached to her building.

“You’re definitely more involved with your job here,” she says about weekly visits to the Mitchellsburg, Forkland, Perryville, Alum Springs and Gose Pike centers. “Making sure everything’s running correctly, that people are putting things where they belong …”

However, she credits her center manager, Ralph Smith, for keeping in contact with them constantly. “I rely a lot on him.”

When asked why she loves what she does, Angie doesn’t skip a beat. “I hate litter. I hate litter and I hate tires. There was a lot of that where I grew up …”

Angie plans on following in Donna’s footsteps with “education, education, education.” She’s a certified professional environmental educator; she feels education is essential to breaking generational cycles of acceptance for illegal dumps in rural areas and the casual “toss out” of the car window, resulting in trashy roadways.

“And tires. If people only knew the health factors … When you burn them, they release cancer-causing toxins into the air we all breathe in.” She uses the cautionary tale of a friend of hers from back home, who took her son picnicking in a rural area.

“Her 9-year-old ended up with encephalitis. Where’d it come from? That tire laying down there in the water. Mosquitos love to breed in those tires.”

Raised in a rural area, she grew up seeing “lots of top-of-the-hill, rolling down the mountain-type littering and dumping. We did a lot of illegal dump cleanups, and it made a big difference.”

Five people work at the recycling center in Danville under Angie, plus the inmates who work there. Solid waste employees are the ones out on the road with inmates, supervising roadside clean-ups.

Angie plans to keep a close eye on what she calls “Donna’s baby” — Clark’s Run. “People need to keep watch on it, and I would like to take over where she left off.”

She plans to start an annual volunteer day, for example, where participants can “go down and keep it clean, keep it going.”

Sometimes, Angie gets direct calls about litter complaints, other times the department just notices it themselves. She says people call in for all kinds of different reasons.

“But it’s usually because of their neighbors. I’ve always seen that your family and neighbors are your worst critics,” Angie says with a hearty laugh. “They will tell on you faster than a stranger wil.”

Angie deals a lot with code violations, following up with complaints received via phone, email or forwarded to her from others. Marty Maddox, who does litter control, goes out to different sites as well.

She produces a small white card she and others leave behind when making a visit, either to investigate a complaint or follow-up from an earlier visit. From what she hears, Tom Broach does an excellent job with code enforcement in Danville, so that helps.

Believe it or not, she says a job in solid waste teaches you to deal with all different types of mindsets. Sometimes the complaints aren’t a valid code violation; other times they are, and some can get very irate about being told what to do with their land.

One situation after she started resulted in a person threatening to come to solid waste and kick some butt. “Yeah, he really lost his mind on us,” she says, but there was trash, junk cars — it was a valid complaint called in.

“I’ve had people tell me it’s their property when they’re burning trash. I tell them, ‘Well, no, it’s my air.’ If they’re burying their trash, I tell them if they can get a landfill permit, it’s fine. Otherwise, it’s illegal burning and dumping.”

If she could change something about her job, Angie says, “We wish people could call in more and give license numbers when they see people littering” by throwing trash out car windows. Those calling in don’t have to give their names, and believe it or not — she says those calls telling people “someone saw you littering” tend to work. She says a lot of the roadside trash is from big trucks taking things to convenience centers, for example, and not strapping things down correctly.

“And I wish people would rinse their things” before adding them to the recyclables, she added. “And fast food containers are not recyclable. We don’t want your KFC box.”

She would like to spread the word that she’s here to help people.

“Even if they’ve caused an issue, I am not out there to put them in jail or take them to court,” she said.

Angie invites anyone who wants to know more about the recycling effort to stop by the center, located at 1862 South Danville Bypass, and take a tour. Last year, the center took in 811,147 tons of recycled materials. “I’d like to hit a million,” she says.

Bobbie Curd/bobbie.curd@amnews.com Angie has some of her awards from her prior job up in her office, but said she hasn’t even started to settle in completely yet. “The next time you’re here, you won’t even recognize this office,” she said.

Timeline for new fire station laid out by Danville officials

Editor’s note: This is the fourth in a series of stories highlighting discussions during a recent Danville City Commission/management team... read more