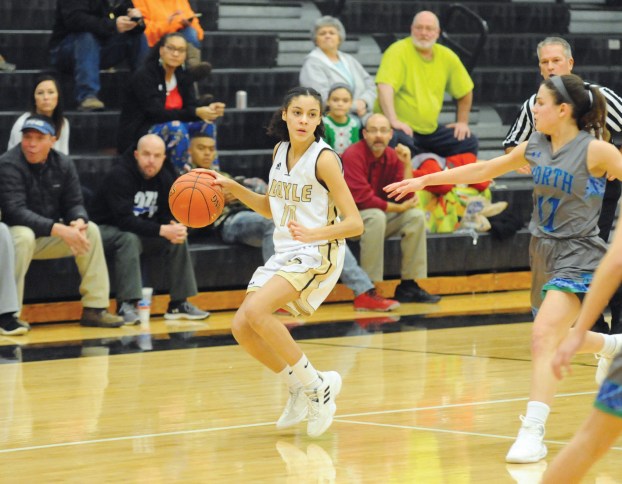 Boyle County’s first two quarters against North Laurel were not what head coach Greg Edwards expected from his team.

The second half was better, but the Rebels couldn’t overcome a 24-point halftime deficit and lost to the visiting Jaguars, 73-49.

“I was pretty disappointed at halftime, I questioned their desire a little bit,” Edwards said. “I just didn’t feel like we were getting up and down the floor. They were getting rebounds, taking it up the floor and we weren’t even back yet. We talked a lot about that at halftime, then I told the seniors, ‘look, you’ve got to decide if this is what you want to do, if this is the team you want to be.’ I thought we played pretty well there after that.”

Boyle struggled in the first half, allowing North Laurel’s offense to work its way through 6-foot-4 center Raegan Hubbard with ease. The Rebels trailed 41-17 at the break, with Hubbard scoring a game-high 12 points in the first half. Alyssa Wray led the Rebels with six points at the break.

But in the second half, the Rebels’ defense tightened and the offense found its flow. Boyle opened the third quarter with a 16-2 run to cut the Jaguars’ lead to 10 points.

North Laurel would make a 7-2 run to end the third quarter and scored 23 points in the fourth quarter when the game opened up, but Edwards said he liked the way his team responded from a sluggish first half.

“We’re still trying to figure out who they are, we’ve not had it easy,” Edwards said. “This is probably the toughest schedule we’ve had starting out. We’ve lost two 1,000 point scorers from last year and the school’s leading rebounder. There’s a lot we’ve had to fix, rebounding being one area where we’ve got to be better as well.”

Boyle graduated 1,000 point scorers Gracie Edmiston and Danielle Roney from last year’s team, and this year, seniors will be tasked with picking up the scoring with some new faces in the fold.

Seniors Makayla Baker and Rachel Leath have been starters for years, while juniors Keely Bowling and Alyssa Wray can also score in bunches. Baker and Wray led the Rebels with 15 points on Tuesday.

Wray’s return to the team has been a huge help this season — particularly with senior Lauren Steinhauer going down with an injury in the second game of the season.

“Alyssa played as an eighth grader, she basically missed the last two seasons,” Edwards said. “Getting her back is huge, she’s talented in a lot of ways, you see she sung the national anthem. She’s talented. She’s already getting some (college) looks for basketball and I think the sky’s the limit for her.

“Lauren has made really good progress and hopefully she could be back by Christmas. Right now it’s making Alyssa play a lot of minutes. We’ve got another backup to Alyssa but she’s basically a guard, guarding 6-foot-4 won’t really work.”

The Rebels also started eighth-grader Peyton Bugg on Tuesday, who has filled in a role as the point guard well so far this year, Edwards said.

“Peyton, she’s had a really good season in middle school,” Edwards said. “We brought her up with the idea that she’d have to play minutes, not necessarily to start. But she has done a really good job, as far as ball handling and the way she sees the court. She’s going to be a really good player here. She’s quick, she’s got good instincts. Her parents played, her dad is a coach, she’s been around the game.”

Tuesday was Boyle’s first home game of the season, and the Rebels will return home Thursday against 12th Region opponent West Jessamine.

“We’re trying to figure out who we are offensively and defensively, that’s where we are right now,” Edwards said. “We’re starting an eighth grader at point guard, she’s going to get nothing but better. Girls are having to play positions they didn’t play last year. By the time we get in these district games, we’re trying to have it figured out by then.”

Boyle County and Danville wrestling teams hit the road over the weekend for wrestling tournaments in Lexington and Tennessee. Danville... read more