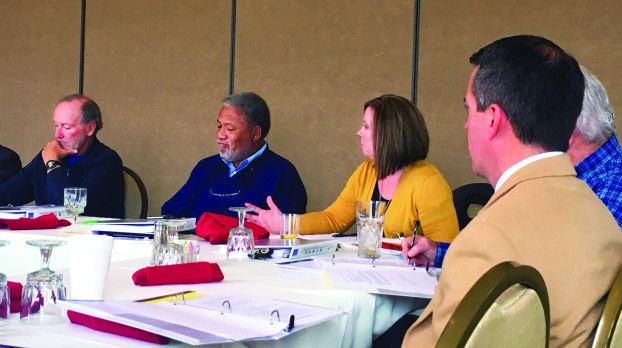 Timeline for new fire station laid out by Danville officials

Editor’s note: This is the fourth in a series of stories highlighting discussions during a recent Danville City Commission/management team retreat where staff met to outline goals and objectives for the coming year.

Danville’s new fire station could be under construction this summer, and the building could be complete as soon as early 2021.

The city discussed major initiatives to be carried over into the new year last week during the city commission and management team staff retreat. The agenda began with general fund services, such as prioritizing recommendations for the master parks planning process, and determining the next steps for an implementation process.

Municipal Utility Engineer Earl Coffey said as far as the design and building of the new central fire station, which will be located beside of city hall on newly acquired lots, “Procedurally, we’re not getting on that tomorrow, not clearing the site tomorrow. Our intention is to make sure the site is somewhat secure.”

Coffey said after that’s done, the area will be turned over to police and fire to do some entry training. They’ve requested the space in order to train for things like forced entry, building penetration and more, he said. The spaces will be made available for those purposes through March.

Meanwhile, he said preliminary surveys will be completed, which are required for the demolition permit. Hopefully, demolition can begin in March.

“We’ve made some site visits to see opportunities of modern concepts,” Coffey said. The city hopes to arrange further ones for the city commissioners. If all goes as planned, Coffey said the architect will have some site designs done by then, and construction can begin by April.

“Between now and May will be a period of concept and design development,” he said.

Hopefully, construction could begin around July or August. Coffey estimated construction would be an 18-month process, depending on weather conditions.

Commissioner Rick Serres said, “From the public’s eye, it’s good to see police and the fire department front and center … I agree with the architectural response to that.”

City Manager Ron Scott introduced “another bit of unfinished business” the commission started but did not complete on creating a TIF (tax increment financing) district.

Creating a TIF district is an economic tool used by public agencies, in partnership with a private business, to finance infrastructure improvements by earmarking future property tax revenues resulting from increased property values.

Scott said hopefully a TIF could attract business developers to the downtown area. Along with downtown Danville’s federal designation as an “opportunity zone,” there would then be two types of incentives available.

What remains to be determined, Scott said, is what the current fire station will be used for, or how to dispose of the property it sits on, “which would be in that TIF district.” He said January or February would be a perfect time to complete creating the district.

Scott said another big issue is expanding art in the city, specifically with mural installation processes. “Can we do better in that process? Should it be limited to the historic district? Should it be city-wide? what role does planning and zoning have in that approval process? … should it be done by a stand-alone committee?” Scott said all these are determinations that need to be made sooner rather than later.

“I contemplate having an open workshop where we can have more transparency in those discussions,” Scott said.

In terms of street and streetscape improvements, Coffey listed several and gave updates:

• Replacement of Second Street bridge — The contractor has submitted plans that need to be approved, then a construction schedule will be set. “The thing we’ve considered internally is that we just don’t have a way to get asphalt,” Scott said. “We may have to wait a couple months, quite possibly might be a March time period. There’s some concerns with the schools, so we’ll consider all of those factors.”

• Streetscape improvements, Fifth to Fourth streets on Main — The project will affect both sides of the road. “When we started scheduling the pre-construction, we got those two weeks of rain,” Scott said. “I’ve got a little bit of work to do on my side to help facilitate that.” He said he anticipates having the schedule lined out in the next few weeks. “Regardless, we will be done by the end of spring, around April or May.”

• Streetscape grant (pending) on Main from Fourth to Second — There’s no idea yet if the grant has been awarded or rejected. “The last word we got was there’s been no determination on that application,” Scott said. The grant was submitted in December of 2017.

• Commissioner Serres said Centre College’s soccer coach is interested in talking to the city about putting in two new soccer fields in Michael Smith Memorial Park, off of South Second Street. “It’d be good if we could get together and talk about that soccer field placement and parking down there,” Serres said. “When I asked him about funding, he said he had that worked out. So this is just a win-win.”

• Organizing streetscape improvements moving forward — Coffey said after getting the Main Street section done, the next step is to consider is a small section from Third Street down to the parking garage, to the south of Main Street. “There’s two small sections there (that) are economical to rebuild,” but he said they may not warrant a grant-level expenditure.

He said the next big phase will be the Fourth Street corridor, and “the complexity there is vast.” Consideration, he said, has to be given on how to integrate the utilities — from north to south, at minimum from Broadway to Walnut — into the streetscape concept. All of the utilities on Third Street are underground now, he said, and “certainly that’s always been the target of the streetscape project, but it will add quite a bit to that section in terms of cost.” He said the work can be done in phases.

• Sidewalks — The beveling process on Lexington Avenue has begun, and a few other sections immediately around downtown to be completed in the spring.

• Street safety and improvements — Work is continuing on solving the issue of traffic flow on Skywatch Drive, where Starbucks is located. An encroachment permit would need to be obtained, which would take four to six weeks to get. “And then we would try to alter that intersection … adding a median to it and trying to delineate traffic patterns,” Coffey said. He said he met with the state, along with Chief Tony Gray, to come up with the solution, and it appears to be a “solid approach on paper.”

Danville announced Tuesday it will buy the Boyle County Fairgrounds property. The city is purchasing two tracts of land off... read more