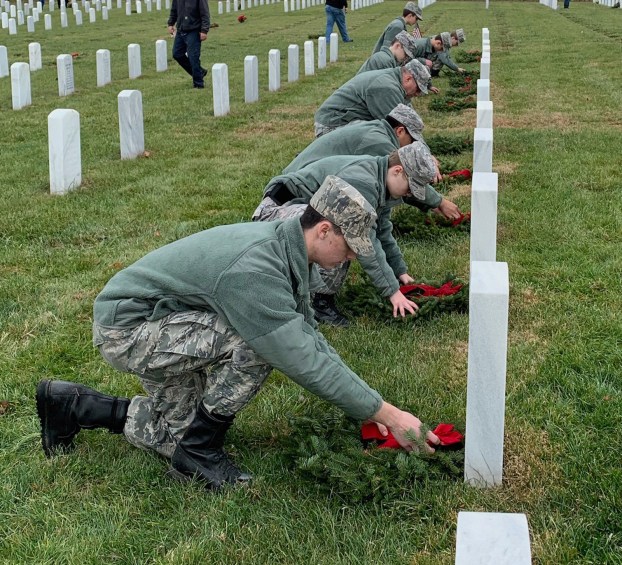 FRANKFORT — Under gray skies, the rain showers paused for a moment as our country’s veterans were remembered with wreaths placed on their graves. Kentucky was just one of many states that lay wreaths on the second Saturday of every December. All across the United States, our country’s heroes were honored with a moment of silence at noon. Over a hundred people were present at the Lebanon National Cemetery for a Wreaths Across America ceremony.

The wreath laying ceremony was kicked off last Monday at the Kentucky State Capitol Rotunda. Volunteers conduct the Statehouse ceremonies each year in their respective state capitols. Dignitaries and special guests speak in honor of our veterans and active military. 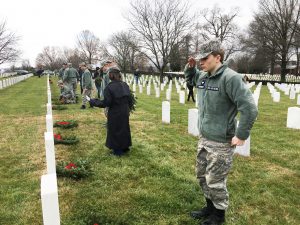 One of Civil Air Patrol Kentucky Wing’s 20 squadrons, KY-122 Stuart Powell Cadet Squadron in Danville, was instrumental in raising funds for 200 of the 405 wreaths that were laid. Cadets are 12-18 years old. They presented the flags from each branch of the Armed Forces along with the Marion County High School JROTC who presented our nation’s colors. The two groups of youth leaders presented the flags at Monday’s kick-off ceremony and at today’s wreath-laying event.

The commander of the Stuart Powell Cadet Squadron stated, “I am always inspired to see so many young people taking part in this ceremony. Not only Civil Air Patrol, but the JROTC and the Scouts as well.” He follows his quote with the hashtags – #RememberHonorTeach that is the Wreaths Across America moto.

A presentation of eight wreaths began the ceremony that represented the Army, Marine Corps, Navy, Air Force, Merchant Marines, Coast Guard, POWs, all the veteran’s in the state of Kentucky, and one for the late President Bush who recently passed away. Hayden Johnson emceed the event. Ann Courtney Thomas sang the “Star-Spangled Banner” and Barney Tharp read a poem written by Andrea Brett titled, “I am a Veteran.”

Members of the Marion County Honor Guard presented a seven-gun salute and two buglers played Taps for this solemn event. In 2018, this group of veterans preformed gun salutes and play taps at more than 100 funerals for the fallen veterans across central Kentucky.

Other groups were represented at the wreath-laying event. Members of Marion County Law Enforcement and Marion County Rescue, American Legion, VFW, Scouts of America from Campbellsville, and the Patriotic Guard Riders were in attendance.

Wreaths Across America was founded by Morrill Worcester, a Maine businessman, to expand the annual wreath-laying ceremony that began at the Arlington National Cemetery in 1992. The organization’s mission, Remember, Honor, Teach, is carried out in part each year by coordinating wreath-laying ceremonies on the second Saturday of December at Arlington, as well as hundreds of veterans’ cemeteries and other locations in all 50 states and beyond.

Wreaths Across America Location Leader for Kentucky, Hayden Johnson, has been doing this event for nine years. When is dedicated in coordinating this event, he says, “I am a patriot and feel that the veterans, POWs, and first responders need to be remembered. It is the right thing to do.”

A lifesaving holiday wish – the gift of life