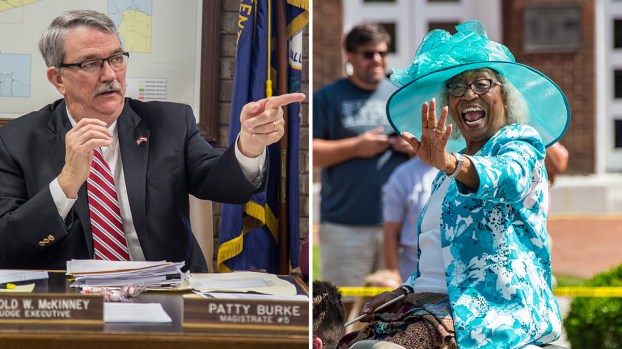 McKinney, Sleet depart from EDP board

Two long-time members of the Develop Danville Board of Directors attended their final meeting Wednesday morning, and received thank-you gifts and a standing ovation from their fellow directors. 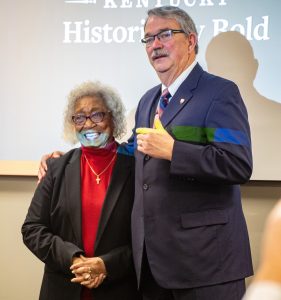 Ben Kleppinger/ben.kleppinger@amnews.com
Develop Danville board members Anne Sleet, left, and Harold McKinney are honored for their years on the board Wednesday during their final board meeting. The pair stood in front of a projector while the other board members gave them a standing ovation.

Boyle County Judge-Executive Harold McKinney and Perryville Mayor Anne Sleet will both be done serving on the board when their elected terms end. Develop Danville Chair Ben Nelson said Sleet has served on the board since its early days and McKinney has been on the board for around 11 years.

“I told Harold I’m going to try not to cry today,” Nelson said half-jokingly as he called McKinney and Sleet to the front of the training center at Denyo Manufacturing, where Develop Danville — also known as the Danville-Boyle County Economic Development Partnership — has been holding its board meetings.

“We’ve enjoyed having you on this board. We’ve enjoyed your steadfast support of this partnership,” Nelson said.

McKinney and Sleet are among the leaders who saw a need for more than a volunteer presence in economic development for Boyle County, Nelson said.

“You’re always here, you’re always ready to volunteer, but you’re not trying to do the job. You’re trying to help with what the community needs,” he said. “… One of the things you brought as an elected official is a belief that said we believe this partnership is the way to move forward.”

“I have really enjoyed working with you all,” said Sleet, who is at the end of 12 years as Perryville’s mayor. She did not seek re-election this year. “I extend my congratulations to you all for accepting me as being a part of this and Perryville … we have accomplished a lot.”

Sleet told the remaining board members to “continue the good job that you are doing. You’re doing well.”

“Careful what you ask for,” Danville Mayor Mike Perros cautioned with a laugh.

McKinney used his chance to make a comment to compliment Sleet, who he said helped guide him shortly after he graduated from Centre College. McKinney is at the end of his second full term as Boyle County judge-executive. Like Sleet, he did not seek re-election this year.

“Thank you all for the opportunity to serve,” McKinney said, then joked: “And I have changed my phone number — I will not be reachable.”